Posted in: The Reel World by Archive Authors on October 31st, 2014 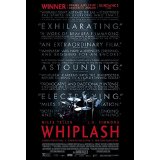 Whiplash has gotten so many raves that I want to make sure I address the things that are bad as well as the things that are good about the film. First thing I will say is that the movie is implausible, and I had a hard time to totally buy into it for different reasons. The film is about a young jazz drummer at a prestigious music academy who gets to play in the band of the top instructor at the school. It becomes apparent early on that the instructor is crazy. He browbeats and actually beats his students into compliance without a hint of mercy. That a teacher of anything aside from martial arts could physically and psychologically brutalize students to this degree is a reverse fantasy projecting deep-seated angst toward authority figures.

Fine, then the film is a fantasy or allegory, because I did not for one minute think  it could exist in the real world. Even a drill sergeant at a military boot camp is bound to show more restraint. What is also obvious is that the music instructor shows obvious signs of mental illness with volatile and extreme swings in behavior. That might indicate that he is adept at hiding his behavior in the right company, but, in the real world, it wouldn’t fly. The large ensemble have all fallen in line, which allows him to pick on the new kid. The band leader’s rationale is that Charlie Parker had a symbol thrown at his head which then forced him to practice much harder and subsequently achieve greatness. But that story is not accurate, because the symbol was thrown at his feet as a mild rebuke, not an act of war. It is also unlikely that he played so hard that his hands were constantly bleeding. It is true that musicians and artists in general can be a crazy lot, but not in an academic setting. There are rules. On some level, the students are a little crazy themselves for pursuing serious jazz when it is so much more difficult and produces less rewards monetarily than other forms in this day and age. Moreover, the young jazz drummer basically loses his mind in an attempt to match the master and beat him at his own game.

Andrew Neyman (Miles Teller) seems to be a very docile young man as he goes to old movies with his father (Paul Reiser), though at times, it becomes apparent that he is obsessed and has blinders on which force him down a very narrow road. He believes in his own potential greatness which makes him a ripe victim for an equally monomaniacal mentor. Terence Fletcher (J.K. Simmons) is the mentor.

Both Simmons and Teller have roles of a lifetime which require massive swings in behavior. It is very likely both will be nominated at various awards shows. Simmons has been very good so often that he is clearly deserving, and Teller was very promising in one of his first films, Rabbit Hole. Teller was also very good in The Spectacular Now with his Divergent co-star, Shailene Woodley. The film has already done very well on the film festival circuit. There is no doubt that the film is entertaining, which is quite an achievement since it is about the intricacies of jazz drumming, which would be alien to most people. The film deals in intensity which does not let up and in fact builds to a spectacular climax. If the movie were a symphony, it would end with a thundering crescendo. It can be said that both characters can be charming and gain our sympathies as much as at times they infuriate us. Fletcher at times shows palpable remorse. Any musician can understand the demands that the art puts on them and can probably identify with both characters at times. The film is a metaphor and allegory for the need to push for greatness at all costs. It is about pursuing your dreams and not giving up no matter what. It is about bucking up and fighting the good fight. It is about putting blinders on and pursuing your goals relentlessly.

Unfortunately, most people will see Whiplash and say, “Give up, already!”