Posted in: No Huddle by Brent Lorentson on October 31st, 2014 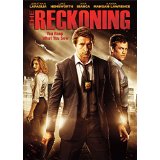 Just because an actor shares the same last name of their more popular sibling, the talent doesn’t necessarily carry over as well.  In the case of The Reckoning, the Australian thriller has two siblings with much more marketable star power. Jonathan LaPaglia comes into The Reckoning and ripping a few pages from his brother’s acting book in playing a detective whose partner is the victim of a heinous act of “random” violence. Also joining the film with famous siblings is Luke Hemsworth, whose brothers Liam and Chris Americans may be more familiar with.  Does the hereditary star power help this little Aussie film, or does it flounder down under?

Detective Green (LaPaglia) comes into a crime scene where his former partner, Detective Pearson (Hemsworth), has been found murdered.  What at first looks like a random shooting quickly gets more complicated upon the discovery of a digital drive that sets the stage for a more complicated case to unfold.  It is what is on the digital drive that is far more interesting to watch than the investigation that follows.  In the video we see Rachel (Hanna Mangan Lawrence) and her boyfriend AJ (Alex Williams) piece together the clues to who is responsible for her sister’s hit-and-run murder a year before.  Rachel isn’t just some young girl with a video camera making a documentary; instead, she’s a girl with an illness that she knows is going to kill her, and as we see it makes her a force to not be trifled with.
Rachel is out for blood and wants to avenge her sister; in the process as she comes across the drug dealers and crime bosses responsible for dealing drugs to her sister, a trail of bodies is left behind in her wake.

What is cumbersome about this film is that the detectives seem to only investigate the crime scenes as they see them in the video.  Basically all they had to do was fast-forward a bit and they could have cut out a lot of pointless leg work and captured the young lovers before things escalated as they eventually do.  What is more problematic is that no matter how much nonsense is brought up from Detective Green’s past, it’s so difficult to care about this guy.  Rachel is put up to be the villain, but no matter what we see her do as the film progresses, I find it hard to believe anyone would side with Green over her.

With half the film shot in pseudo-found-footage, what I can appreciate is that the footage we see of Rachel and Alex is actually well shot.  Sure, we know they are using a handheld camera, but thankfully they seem to know a thing or two about framing and keeping a steady shot so that the viewer doesn’t have to endure much in the way of motion sickness.  As for the rest of the film, it’s shot in a very generic style without much in the way of inspired filmmaking.

As I was watching the film, I wasn’t terribly impressed, but it at least held my interest, but it’s in the film’s final act where it just became a mess for me.  I won’t spoil anything, but the decisions we see made here by the characters is just uninspired.  Rachel in my eyes is the hero of the film despite the moral choices she’s made.  It’s a copout, grasping-at-straws move we see as the filmmakers try to invoke sympathy towards Green, when really he doesn’t deserve it.

While the film is far from perfect, it does have some entertaining qualities that we get from Rachel’s story.  On a night you want to scroll through your Netflix account and throw on something while doing laundry, this is a film you can walk in and out of and not be missing much.

Brent Lorentson is a horror writer and film critic based out of Tampa, Florida. With a BA in Digital Film, he co-wrote and co-directed Scavenger Hunt. His short stories have appeared in various horror anthologies. In 2019 his short script Fertile Blood will be a part of the anthology horror film Slumber Party. He is currently working on his first novel A Dark and Secret Place set to be released in late 2019. Favorite Films: Taxi Driver, Fight Club, I Saw the Devil, The Wild Bunch, Dawn of the Dead, A Clockwork Orange, Pulp Fiction, Heathers, The Monster Squad, and High Fidelity.
“31 Nights Of Terror” Exclusive Interview With Malek Akkad From Free Fall and Halloween Franchise Whiplash