Posted in: No Huddle by Gino Sassani on November 6th, 2014 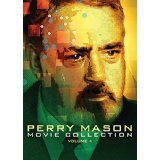 Perry Mason officially ended in May of 1966, but that wasn’t going to be the end. Twenty years later the surviving cast members reunited for Perry Mason Returns. It was Perry and Della back together again. Both Raymond Burr and Barbara Hale returned to their roles. William Hopper had died in 1970, so William Katt joined the reunion as Paul Drake, Jr. Katt might not have really been Drake’s son; he was Hale’s son. When Katt left the films he was replaced by William R. Moses as Ken Malansky. Ken was a young law student helped by Perry once when he was framed in law school for a rival’s murder. He ends up being both a legal assistant and investigator for Perry in the reunion films. Ken’s girlfriend is Amy, played by Baywatch’s Alexandra Hastings. Amy was a rich girl who had too much time on her hands. It led to her involving herself in Ken’s investigations. The films also often starred James McEachin as Lt. Brock, the cop on many of the cases. The team would continue to do 30 television movies from 1985-1995. CBS has now begun to package these reunion films in collections like this. You get six films on three discs. The discs appear in a plastic case, and the cases are held by a cardboard slipcase.

It’s magic. No, I’m not talking about the way Mason always seems to pull a rabbit out of his hat to clear his clients of murder. This time his client is the magician. When his pregnant assistant ends up dead, magician David Katz (Scolari) is the number one suspect. It doesn’t help that he’d been having an affair with the dead girl.

Of course, there’s always a room full of suspects for Perry and his team to look for the “real” killer. You’ve got the jealous wife (Braden). You’ve got the guy who has been stalking her and whom she kept blowing off. There’s always the girl from whom she stole the show’s spotlight. There’s a rival magician who Katz either stole his tricks from, or was Katz the one being ripped off?

Mason ends up with a front seat to the actual murder. He’s in the audience when a stunt goes bad and the young girl gets killed. He was a guest of Katz himself who now needs a favor in return. Fortunately, Perry knows the entire performance was being secretly recorded. Ken spends most of his investigation time tripped up by a rival investigator. In the end, there’s a dirty secret that someone doesn’t particularly want revealed.

A fashion magazine editor discovers that a critic for a rival publication is going to turn their poison pen on her. After trying unsuccessfully to change the critic’s mind said writer turns up dead. We already know who is going to get the blame. Just by a stroke of luck Perry is in New York, and the accused happens to be an old friend. It’s time to look at that list of suspects to clear another client.

Perry’s client Dyan is played by television’s Rhoda, Valarie Harper. Other notable guest stars include a young Robert Krepper and Ally Walker. We also get an unusual courtroom team-up here. Scott Baio plays Perry’s opponent attorney. Baio, of course, worked with this production crew in the early days of Dick Van Dyke’s Diagnosis Murder. We also get Bruce Kirby as Detective Brennen. This is certainly one of the more interesting casts for the Mason films even if it is one of the weaker stories.

You hear it all the time. A painter’s art is worth a lot more when the painter dies. One painter decides to use that to his own advantage and cash in by faking his own death. He returns years later when forged copies of his work start turning up in the market. Someone decides to make him dead for real this time. It’s a friend of Ken’s this time who is framed for the murder.

David Soul from Starsky & Hutch plays Truman York, the twice-dead painter in one of his more exotic performances. You almost hate to see this victim get killed, because he’s quite entertaining.

So, who are the suspects this time? How about York’s ex-lover, who just found out that he’s been alive all of this time? There’s always the collector who wants to keep the value of his investment up. There’s the trusted friend who knew the truth and has been helping York sell his paintings. What about the guy who blames York for the death of his wife during the accident that he thought killed York, as well?

Can Perry help out Ken’s buddy? It doesn’t help that he was waving a gun at the dead guy hours before he turned up dead.

This one has the most true-to-life casting. Geraldo Rivera is an investigative reporter who is about to write a tell-all book. That’s always a dangerous thing to do. It also makes for that large pool of people who want someone dead that these Mason shows rely upon. The film does turn the tired plot on its head a bit. This time it’s a guy writing about the women he’s taken to bed, threatening their families or careers. It doesn’t help Perry’s client that there’s a videotaped death threat from her.

Father Dowling’s Tracy Nelson plays yet another woman with a man’s name. This time she’s Charlie, who sees herself as an investigative reporter and keeps getting in Ken’s way.

The film goes a little counter to the normal formula of a Perry Mason mystery. The show is a third of the way along before anyone gets killed. Part of that was obviously to take advantage of Geraldo’s performance of literally playing himself.

There are still several collections on the way before your Perry Mason collection can finally be complete. It’s been a long road, but the end is in sight. Fans will be able to pick and choose their favorite cases from each and every Perry Mason moment. “Just like that.”

Gino Sassani is a member of the Southeastern Film Critic's Association (SEFCA). He is a film and television critic based in Tampa, Florida. He's also the Senior Editor here at Upcomingdiscs. Gino started reviewing films in the early 1990's as a segment of his local television show Focus. He's an award-winning recording artist for Omega Records. Gino is currently working on his 8th album Merchants & Mercenaries. Gino took over Upcomingdiscs Dec 1, 2008. He works out of a home theater he calls The Reel World. Favorite films: The Godfather, The Godfather Part II, The Body Snatcher (Val Lewton film with Karloff and Lugosi, not the pod people film), Unforgiven, Gladiator, The Lion King, Jaws, Son Of Frankenstein, The Good, The Bad And The Ugly, and Monsters, Inc.
Step Up: All In (Blu-ray) The Hobbit: The Desolation of Smaug (Extended Edition) (Blu-ray 3D)