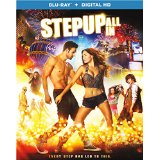 “Does it always have to end up in a big giant dance battle?”

If you’ve ever sat through a dance movie, then you know the answer is a resounding, “Yes!” Dance flicks are a somewhat different beast than movie musicals; they are less whimsical and tend to take themselves more seriously, which invariably makes them seem even sillier. Some of the movies in this genre — Dirty Dancing and Footloose — are beloved guilty pleasures. (And many people who love them don’t even bother feeling guilty.) In recent years, the “dance flick” itch for moviegoers has been scratched by the Step Up franchise.

“To make a living as a dancer, you go through stuff that doesn’t feel so magical.”

The first film in the series came out in 2006 and made Channing Tatum a star. Ever since, there has been a Step Up movie every other year. This fifth(!) installment reacquaints us with The Mob — the dance crew heroes from the previous film, Step Up: Revolution — as they struggle to find steady work as professional dancers in Los Angeles. Demanding crew leader Sean (Ryan Guzman) has a falling out with his best friend Eddie (Misha Gabriel), who decides to move back to Miami with the rest of The Mob. After accepting a menial job at a ballroom studio, Sean finds out about a Las Vegas dance competition called “The Vortex,” which comes with three years worth of job security for the winning crew.

Having alienated his original crew, Sean has to scrap together a team of All-Stars. The newly-formed crew is dubbed LMNTRIX and features characters from the four previous Step Up movies, which really makes All In feel like a dance-y remake of Fast Five. Sean is alternately challenged by/attracted to Andie (Briana Evigan, Step Up 2 The Streets) as he desperately tries to get his new crew ready to take on rival group The Grim Knights…and maybe some old friends as well.

Step Up: All In falls firmly in line with all the other films in the series; the movie works best when you view it as a collection of spectacular dance sequences that are occasionally broken up by scenes with talking. (A handy special feature on this Blu-ray cuts through the crap and gives you all the dancing in one chunk.) The movie attempts to dramatize the constant rejection these talented performers face in the cutthroat world of dancing, where people in their mid-to-late 20s can be considered over the hill. Unfortunately, both the afterschool special-quality acting and writing undermine any serious points the movie might be trying to make about the grind of being a struggling dancer.

The good news is bad acting and writing don’t necessarily spell doom for a dance flick. In fact, I’d argue cheesy dialogue and questionable line readings are expected in this type of film. This is especially the case when a significant portion of your talent is made up of So You Think You Can Dance contestants. Guzman, the star of previous film, comes off as a hard-working, ultimately bland performer. As a result, his flirtation with the feisty Evigan falls a little flat. Luckily, some of the other performers do pop. Adam Sevani has appeared in four out of the five movies as Moose, and is a pleasingly laid-back presence amidst all the tough-guy posturing. Speaking of tough-guy posturing, I thought Stephen “Steve-O” Jones was suitably boo-able as the arrogant leader of the Grim Knights. The movie makes a bigger deal than necessary out of The Vortex event itself, with Izabella Miko channeling Effie Trinket as a vapid pop star named Alexxa Brava.

There is little-to-no cinematic trickery on display for the dance sequences, which is a good idea considering the series once again features some of the best hip hop dancers in the world. The standout moments include a spectacular solo by “Kid David” Shreibman — who plays a vain ballroom dancer with b-boy skills — a dance battle that takes place inside an oversize boxing ring, and the climactic Vortex finale. All In is almost entirely a hip-hop dance film, which is a bit of a shame considering the varied So You Think You Can Dance talent the producers have access to. So no matter how tremendous the dancing is, it inevitably invites comparisons to similar films like You Got Served and Stomp the Yard. (Contrast that with Center Stage, which basically owns the ballet school corner of the dance flick universe.)

Director Trish Sie, a choreographer best known for the excellent “Here It Goes Again” video by OK Go, made her feature film debut with All In. She lingers on a several“dramatic” beats for too long; at 111 minutes, the movie is considerably flabbier than its toned stars. Thankfully, Sie generally knows precisely where to place the camera and how often to cut (or not cut) in order to showcase the movie’s best visual effect: its spectacular dancers.

Step Up: All In is presented in an aspect ratio of 1.78:1. The 1080p image is arrived at with an AVC MPEG-4 codec at an average of 26 mbps. Despite being shown in 3D theatrically, this Blu-ray release of the film comes without the extra dimension. (At least in North America.) There are about a handful of obvious “pop out” moments (involving sand and fire) that fall a bit flat without the 3D, but this Blu-ray from Lionsgate still offers a vibrant and varied experience. The film’s opening narration features a few different image qualities, beginning with camcorder footage and eventually segueing into the generally clean baseline HD image. I wouldn’t call the overall quality razor sharp, but black levels are solid and colors — most notably on display in the different crews’ costumes — pop pretty impressively.

The film is one of the first high-def home releases to feature a Dolby Digital Atmos track. For those of us without Atmos-capable A/V receivers, it is presented as a room-rattling Dolby TrueHD 7.1 track. Dialogue clarity is fine but the track — like the movie itself — really kicks into high gear whenever the dancing (and the music) heats up. It may not be subtle, but it’s very effective. Subs thump to life along with the rest of the surround speakers. The rears only produce minimal atmospheric noise, which doesn’t make for a very immersive experience during the non-dance sequences. But that’s a minor complaint for a movie that, for better and worse, is all about the dance scenes.

“All In with the Crew” Featurette: (9:49) Highlights the returning cast members — star Ryan Guzman learned to dance so he could star in Step Up Revolution — along with the fresh faces in the crew.

“Dance Breakdown: Final Stage” Featurette (5:36) Examines the insane, kitchen-sink finale, which brought together practically everyone in the cast at the same time.

Clap, Stomp, Slide: The Sounds of Battle: (4:17) A look ay the LMNTRIX vs The Mob battle without the music. Even though the claps, stomps, and slides here still sound like they were enhanced by the sound effects department, this gives you a strong sense of how hard the dancers hit their moves.

Audio Commentary with director Trish Sie and actress Briana Evigan: A chummy, funny track — Evigan was watching the movie for the first time — that offers plenty of anecdotes and production details. (An early dance duel took place in a real nightclub as opposed to a set.) Worth an intermittent listen.

Ryan’s Favorite Dance Scenes: (19:14) Guzman offers optional commentary on the opening audition sequence, the rehearsal montage in the L.A. dance studio, and a few other sequences. (He reveals that stunt doubles performed the movie’s breathtaking, death-defying aerial during The Vortex finale.)

The Vortex Dance Index: (34:21) Allows you to watch all of the movie’s dance sequences without having to deal with any pesky “story.” Extremely useful, since you were probably going to do that anyway.

Deleted Scenes: (9:22) Mostly comprised of extended dance takes, including a rehearsal montage in the basement of LMNTRIX’s Las Vegas hotel.

Step Up: All In is probably about 10-15 minutes too long, but otherwise delivers precisely what you’d expect from a dance flick: cringe-worthy acting, worse writing, and absolutely electric dance sequences.

This Lionsgate Blu-ray also offers some solid special features that highlight the “All-Stars” aspect of this film. If you’re a fan of the franchise, you’ll probably enjoy this one. And you’ll definitely enjoy the bonus material…especially if this turns out to be the swan song for the series.