Posted in: No Huddle by Jeremy Butler on November 10th, 2014 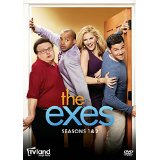 A show about divorce, now I know what you are thinking: “Yeah, Yeah what else is new, the market is flooded with shows about people trying to put their lives together after having their world rocked by divorce.” On the one hand I would agree with you; however, I challenge you to think about this. In my experience these shows are normally from the female perspective and deal with the woman dealing with a bum ex-husband, kids, and getting back into the dating pool. None of these things embody what The Exes is about. Not enough to convince you? OK, what if I told you the cast was made up with actors from some of the most beloved comedies of the past twenty years, how about now?

The Exes features Donald Faison, most notable for his portrayal his nine-year stint as Dr. Christopher Turk on comedy Scrubs (he also was a fixture in the Clueless movie and television show, but it’s best for all of us if we simply put that out of mind). This time around Faison plays Phil, a sports agent regulated to living in a rented condo provided by his former divorce attorney Holly (Kristen Johnson, 3rd Rock from the Sun) that he shares with Haskell (Wayne Knight, Seinfeld), who since his divorce spends his time buying and selling things on the internet. Safe to say that during their divorce their exes took them to the cleaners, laying claim to their homes and forcing them to provide alimony for the foreseeable future. So imagine their surprise when Holly takes on new charity case Stuart (David Alan Basche), who is still working through the denial phase, believing his wife will come back to him.

Hostile and reluctant to take in someone new, Holly forces Stuart upon the two, believing that they can aid Stuart come to terms with this new situation and prepare him to return the dating world presumably without forever being tarnished with the dark stain of D-I-V-O-R-C-E. Needless to say, Stuart’s transition is full of hilarious hijinks.

Though it does fall into the category of situational comedy without depth, The Exes provides enough laughs to make that flaw hardly noticeable (at least for a while). Not to keep harping on the actor’s past credentials, but it is understandable why Faison migrated here rather than seeking out another comedy that tucks on the heartstrings. It would be rather difficult to find another show that was as emotionally rewarding as Scrubs (I am of course speaking about the beginning and middle years of the series). It is also worth noting that Faison does manage to bring the same charisma that he possessed previously to his new project. This time around, he gets to indulge in more of a ladies’ man role to his castmate’s envy.  However, that doesn’t always mean that he walks away with the girl; more often than not our ladies’ man finds himself in circumstances where he is forced give up what he most desires.

Though Faison is the main attraction of the series (at least for me), he is hardly the only member of the cast worth mentioning, as every member of this mismatched ensemble is needed to make the show work. Basche’s sensitive guy socially awkwardly reentering the dating world is a source of great comic relief. Obviously Wayne Knight’s comedy prowess is well established; all it takes is a quip here and there (usually from a sitting position) to getting you laughing. Then there are the ladies of this ensemble who bring sexiness and attempts-at-sexiness to the fold.  There’s Kelly Stables (sexiness) as the hot party girl at night/executive assistant during the day that you simply want to stick in your pocket. However Stables is overshadowed by Kristen Johnson, as she like her male counterparts attempts to find a worthy companion, which is a great source of laughter.

Jeremy Butler is a film school graduate of the International Academy of Design and Technology. He is been writing for Upcomingdiscs since 2012; however, movies have played a big part of his life for much longer. Favorite genres include horror, science fiction/fantasy, and comedy. Favorite movies are V for Vendetta, Boondocks Saints, Kiss Kiss Bang Bang, and The Godfather.
Interstellar Getting On: The Complete First Season (Blu-ray)