Posted in: No Huddle by Archive Authors on November 13th, 2014 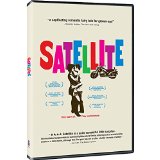 Satellite is a small, micro-budget independent film that went to a bunch of film festivals and got a bunch of great reviews….in 2005. Why is it taking so long to get a proper DVD release? Such is the fate of many small, micro-budget independent films. It apparently also had some music rights issues, which can be hugely problematic because of the expense. There is also the problem of marketing and advertising, which can be expensive. Then they should be better in some way than the Hollywood product, or it doesn’t have a chance. Independents usually try to be more real, honest and risky to garner attention. Independent films just have a different feel, but they also have huge disadvantages because they can’t pay for the best talent. Satellite is a middle-of-the-road type film about two young people who fall in love who hit the road. It’s the middle-of-the-road part that might be the problem.

The young lovers live in New York in corporate drudgery. Ro (Stephanie Szostak) spots Kevin (Karl Geary) for the first time on the subway and follows him. He sees her in a bar, and they fall in love in short order. Ro is a true romantic and is desperate to move on from the last loser she was with. Karl gets caught up in the spirit of romantic abandon and persuades Ro to run away from her job with him. Maybe all of us want to do something like that, but we also know that doing it is crazy. Kevin says in the movie, “In order to feel this good, you need to break all the rules”. They are two sweet kids, but they do break some rules like stealing stuff like motorcycles and shoplifting dresses and cowboy hats. Kevin’s brother thinks Ro must be bad news, but maybe it’s Kevin who is the bad boy. Of course, money starts to run out with neither of them working, so there are bound to be rough times ahead. After all, stealing cowboy hats doesn’t put a roof over your head.

Szostak has had nice roles in Dinner For Schmucks and Devil Wears Prada, and Geary was in Ethan Hawke’s Hamlet, but neither is a name. They are both attractive, but their chemistry was far from perfect. They are good actors, but neither is a New Yorker. Szostak is French and Geary is British, and although neither has a heavy accent, it just doesn’t seem right for a New York story. It’s like the filmmaker wanted to make a cute French movie in America while not acknowledging the awkwardness. If I was in New York and heard that accent, I’d want to know all about where she came from. That’s not the only thing that bothers me about the script, but generally it’s an appealing film. It’s just not appealing enough to seem to make much impact. The film is an enjoyable diversion but doesn’t have that something extra to make it break out as a small independent film. It needs that extra something to catch fire. Ultimately, its biggest sin is it’s too bland.

Things go wrong with their petty-theft lifestyle, and it seems Ro might be a little crazy. Can they survive and keep the romantic fantasy going? Usually in films like Breathless and Bonnie and Clyde things go terribly wrong, or will one last theft let them live happily ever after? They do steal something big, but not in the way you would expect. The goal is to be in love and live a good life. Can anyone ever live that dream for long? Can there ever really be a happy ending anywhere but in the movies?

The film cost $45,000 and took 18 days to make. Considering that, the film is pretty good. I will say the audio commentary by writer/director Jeff Winner is one of the weirdest I ever heard, not because he doesn’t have interesting things to say, but because he says so little. He spends long periods during the commentary just watching the film he made years ago and only occasionally shares those memories that might seem distant now. With any luck they have all moved on to some real life happy endings in big Hollywood films.

Contest: Win Frozen in Time On DVD From Arc Entertainment Contest: Queens of the Ring From Image Entertainment