Contest: Queens of the Ring From Image Entertainment 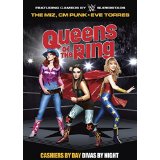 Our friends at Image Entertainment are picking a fight with the ladies this time. Actually, it’s the ladies doing the fighting. We’re talking about Queens Of The Ring out now on DVD from Image Entertainment. A supermarket cashier talks her co-workers into joining her in a WWE Diva training program. It’s a comedy featuring cameos from WWE favorites like The Miz, CM Punk and Eve Torres. You won’t have to fight with anyone to get a copy for yourself. We’ve got 2 copies to give away.

Gino Sassani is a member of the Southeastern Film Critic's Association (SEFCA). He is a film and television critic based in Tampa, Florida. He's also the Senior Editor here at Upcomingdiscs. Gino started reviewing films in the early 1990's as a segment of his local television show Focus. He's an award-winning recording artist for Omega Records. Gino is currently working on his 8th album Merchants & Mercenaries. Gino took over Upcomingdiscs Dec 1, 2008. He works out of a home theater he calls The Reel World. Favorite films: The Godfather, The Godfather Part II, The Body Snatcher (Val Lewton film with Karloff and Lugosi, not the pod people film), Unforgiven, Gladiator, The Lion King, Jaws, Son Of Frankenstein, The Good, The Bad And The Ugly, and Monsters, Inc.
Satellite Hot in Cleveland: Season Five