Legends of the Knight

Posted in: No Huddle by Brent Lorentson on November 26th, 2014 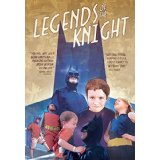 It’s great to see the love that comic books and their characters are getting from the public; only a couple decades ago people didn’t look so kindly on the medium.  Growing up it wasn’t the wisest decision to broadcast to your classmates about your enthusiasm over the new Punisher or Batman comic.  I got lucky and never really had to deal with bullies, but I had friends who had their fair share of torment over liking the kind of music, movies or comics that they did.  The comic book store was a safe haven away from it all, and it was between the pages that all of us comic book geeks would escape and live vicariously through the animated panels before reality came barreling in.

In the documentary Legends of the Knight, writer and director Brett Culp seems to have two goals.  First is to tell the story of how Michael Uslan made it his personal mission to bring Batman to the screen and to be viewed as a serious character, unlike the parody of what he was in the Adam West series.  There is also the other side of this documentary; the heart of it that after watching this film I don’t think it is possible to view superheroes the same way ever again.  I don’t mean to imply there is anything negative here. In fact it is quite the opposite, and the stories that fill this feature will tug at your heartstrings to the point that I believe it could possibly change and make a difference.

Sure, the story of Batman is a fascinating one, and of course there are plenty of ways we can analyze its characters and what makes these heroes and villains tick.  Instead what I find more intriguing and simply inspiring are the tales we see here of those who were inspired by The Dark Knight, the ones who read these stories and were inspired to make a difference in their community, but even deeper it’s the ones who found strength from this character.

This was a production that right from the start feels more like a labor of love and something you would have expected to find as a supplement on a Batman Blu-ray.  Only because of the production quality: though it looks nice, it still has the look of what we’ve come to expect as supplement material with our Blu-ray releases.  It’s the content that allows it to stand out and become so much more and a production that everyone, whether a fan of comics or not, should sit down an watch.

Whether we are following a cop simply wanting to make neighborhoods safe for kids or following  millionaires in costume trying to bring cheer to sick children, what this documentary is about is the good one person can do and how much one person really can make a difference.

The healthy dose of introspection on the character we read in the comics along with the balance of hearing these stories of those doing good in their communities makes this one of the best superhero films I’ve had the pleasure of seeing.  Without the special effects or boasting a cast of A-list actors, it’s these real, everyday heroes who have us engaged and wanting to know how their lives will unfold.

It’s the story of Kye Sapp that hit the hardest.  Perhaps through the news or social media you may have seen the story about a small town that joined together to allow a young boy to be Batman for the day and fight crime against the likes of The Joker and The Riddler.  Well, Kye is that young boy, and when you watch as his segment unfolds, I can only hope it touches everyone as it should.  This is beyond an act of kindness what this town did; for me this just about restored my faith in humanity (and I’m a pretty cynical person).

This is a documentary that succeeds in what it set out to do, and that was to show that everyone is capable of being a “hero”. It’s not about the costume or superpowers, but your actions that will set you apart.  In a world where our TV sets seem to set the stage for race riots or terror attacks, as viewers of the media we’ve grown a thick skin to the violence and negativity that fills the world.  Legends of the Knight is a glimmer of hope that shines a light on the good that still fights the good fight and is trying to prevail in the battle against crime, cancer and numerous negative obstacles that are out there.  Director Brett Culp has succeeded in delivering the most honest look at what a true hero is and has made a film that manages to deliver a greater impact than any of the mega-blockbusters to come out in years.

Brent Lorentson is a horror writer and film critic based out of Tampa, Florida. With a BA in Digital Film, he co-wrote and co-directed Scavenger Hunt. His short stories have appeared in various horror anthologies. In 2019 his short script Fertile Blood will be a part of the anthology horror film Slumber Party. He is currently working on his first novel A Dark and Secret Place set to be released in late 2019. Favorite Films: Taxi Driver, Fight Club, I Saw the Devil, The Wild Bunch, Dawn of the Dead, A Clockwork Orange, Pulp Fiction, Heathers, The Monster Squad, and High Fidelity.
Nocturna (Blu-ray) Frozen in Time