Posted in: Disc Reviews by Brent Lorentson on November 24th, 2014 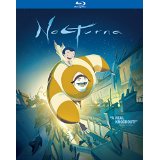 As adults we somewhat have a better understanding of how our dreams work and understand that those fears of the dark when we were children were somewhat silly in retrospect.  But when we were kids, the nighttime was a mysterious time that held so many possibilities, where the magic in the world around us was something that was very real for us all.  In the new Spanish language animated feature Nocturna, the first-time filmmakers (Adria Garcia & Victor Madonado) seem to have tapped into that childlike wonder and have crafted a film that I simply adore.

Tim (originally voiced by Helene Bizot) is a young orphan boy who like most young kids has a fear of the dark.  To help him with his fears, he has become fascinated by the stars above, and on the roof top of the orphanage he has mapped out many of the constellations, but his favorite of all the stars above is Adhara.  For Tim this is his last connection to his mother, who has told Tim that anytime he feels alone or frightened he basically will always have this star to count on.  Unfortunately, one evening Adhara seems to vanish from the sky.

It’s in a desperate act to discover what has happened to his star that Tim sets off on an adventure into the night, and into the city where he discovers the world is so much different than he could have imagined.

What I love so much about this film is it has the kind of wonder and magic that I feel has been missing from Disney films for so long.  When we see Tim meet the Cat Shepherd, it’s just as magical as the first time Wendy first meets Peter Pan, and is taken on her adventure into Neverland.  Instead of venturing into a land where boys refuse to grow up, Tim finds himself in a place where dreams are literally made, a factory where individuals are hard at work creating dreams. But also we get to discover just why hair ends up being such a tousled mess as well.

The look of this film is simple but yet beautiful in many ways.  The color palette mostly made up of yellows, blues and greens is appropriate. It’s the early-20th century look that seems to be otherworldly without being too unfamiliar at the same time with its architecture.  But what I enjoyed most was the care in the creation of the numerous cats that fill the screen.  After all, in this world, every human has a cat that is responsible for them, and it is their job to make sure we sleep so that the dream makers can do their work undistracted.

With its unique animation style along with its wonderfully imaginative story, this is a film that kids and adults can enjoy on their own or together.  In many ways its style and structure reminds me of Don Bluth’s (Secret of NIMH) work but at the same time uniquely its own. Though it came out in 2007 it seems to be only just now getting a Blu-ray release, and I can’t help but feel every child should see this movie as well as every adult that has seemed to have forgotten the magic of what dreams can be.

Nocturna is presented in an aspect ratio of 2.35:1.  The 1080p image is arrived at with an AVC MPEG-4 codec with an average of 32 mbps.  This is a beautifully animated film.  Each character has been crafted in a simple yet original style that seems to make them larger than the space around them.  The city is beautifully done, allowing us to see the labyrinth of streets while hiding plenty of detail in the darkness, which is fine because in this world the darkness is supposed to hide what we do not know as well as what we fear.  The color palette as I mention above consists of blues, yellows and greens that seem to come alive in this nighttime world.  This is a beautifully animated 2D film that has me missing the days when Disney once ruled cell animation.

The DTS-HD Master Audio 5.0 track has a default of having a well-done English dubbed track but also comes with the option of listening to the original Spanish language track.  This is a wonderful track that comes alive with its beautiful score as well as its fantastic sound design mix.  My cats were going nuts every the on-screen cats meowed or hissed on the screen.  But it’s also the sound work of the city at night as well as inside the factory that help us believe this nighttime world could really exist.

The Making of Nocturna: (9:02) a brief interview with the creators behind the film and a look behind the animation process.  I wish we could have seen how more of this came together or had a glimpse at the so-called darker version of the story.

The Art of Nocturna: (5:53) Here we see how the storyboards came to life in the creation of the film.  Again I wish there was more here to see, but it’ll do.

I absolutely love this film, and for everyone, whether you are a child, a grandmother or simply a single grown person, this is a movie you should see.  It’s not often a film comes along that I feel everyone can enjoy on some level, but this movie came from nowhere and simply surprised me in the best way.

Brent Lorentson is a horror writer and film critic based out of Tampa, Florida. With a BA in Digital Film, he co-wrote and co-directed Scavenger Hunt. His short stories have appeared in various horror anthologies. In 2019 his short script Fertile Blood will be a part of the anthology horror film Slumber Party. He is currently working on his first novel A Dark and Secret Place set to be released in late 2019. Favorite Films: Taxi Driver, Fight Club, I Saw the Devil, The Wild Bunch, Dawn of the Dead, A Clockwork Orange, Pulp Fiction, Heathers, The Monster Squad, and High Fidelity.
The Expendables 3 (Blu-ray) Legends of the Knight