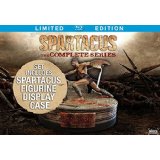 “The gods finally bless us with a complete collection.”

AnchorBay is going all out in delivering a couple of complete series collections. There is a limited edition with some cool stuff that we hope to talk to you about on Black Friday for your shopping edification. This set contains all of the show’s 39 episodes on 12 discs. There is a 13th disc with limited extra features that were not found on the original individual season releases.

For that special gladiator on your shopping list, this is the gift for them. Not only do you get the complete series in high definition; you get a pretty cool diarama with Spartacus in the arena delivering a fatal blow. This is no small toy. The base is large enough that it also serves as the storage space for the 13-disc collection and booklet. It will look good in any home theater. I’ve got one displayed in mine.

The final episode is a moving tribute to all that came before it. I was happy to see a shot of Andy Whitfield declaring, “I am Spartacus” included in the last moments. Each of the characters gets a pretty good sendoff. This is, after all, a season where pretty much all of your favorite characters have to die. As much as the show has been willing to allow its liberties with history, Spartacus and his crew are pretty much doomed. (If that’s a spoiler, you really did sleep through those history classes.) The final season title of War of the Doomed pretty much says it all, doesn’t it? Still, the series brought the character to life like no film or show has done before with the possible exception of Kirk Douglas in the 1960 film. Both gave us the truly larger-than-life figure who almost brought down an empire. “Spartacus stands but mortal man. I have yet held privilege of one that could span distant ground within single breath.”

Gino Sassani is a member of the Southeastern Film Critic's Association (SEFCA). He is a film and television critic based in Tampa, Florida. He's also the Senior Editor here at Upcomingdiscs. Gino started reviewing films in the early 1990's as a segment of his local television show Focus. He's an award-winning recording artist for Omega Records. Gino is currently working on his 8th album Merchants & Mercenaries. Gino took over Upcomingdiscs Dec 1, 2008. He works out of a home theater he calls The Reel World. Favorite films: The Godfather, The Godfather Part II, The Body Snatcher (Val Lewton film with Karloff and Lugosi, not the pod people film), Unforgiven, Gladiator, The Lion King, Jaws, Son Of Frankenstein, The Good, The Bad And The Ugly, and Monsters, Inc.
Frozen in Time Jeff Dunham: All Over the Map (Blu-ray)