Jeff Dunham: All Over the Map (Blu-ray) 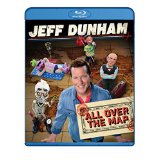 “How the hell did this happen? I mean, I’m on the other side of the planet, and people know who I am and they’re laughing at my jokes.”

Despite his status as one of the biggest draws in stand-up comedy, Jeff Dunham really does seem taken aback by his success. On one hand, you wouldn’t necessarily expect a ventriloquist to be one of the hottest names in comedy in 2014. Then again, the hard work and precision he has put into his act is evident every time he takes the stage. For his latest comedy special, Dunham packed up his puppets and took his show on the road like never before.

Jeff Dunham: All Over The Map features the comedian covering more than 50,000 miles as he travels through 19 cities in 12 countries — Iceland, Norway, Ireland, England, Scotland, the United Arab Emirates, Israel, South Africa, Australia, Singapore, Malaysia, and the United States — on five different continents. The result is a hybrid stand-up comedy special/travelogue, as we get performance clips from each of Dunham’s stops mixed in with scenes of the comic taking in some of the local sights.

The special clocks in at a brisk 83 minutes, which — give me a second as I grasp desperately for the closest calculator — works out to an average of less than seven minutes at each stop. I can appreciate that Dunham wanted to include footage from each destination, but moving so quickly from one stop to another does mess with the rhythm of the comedy to an extent. This is especially evident in the travelogue bits — high tea with a trio of proper English ladies; haggling in a Tel Aviv market — which aren’t nearly as funny or compelling as they could’ve been.

Of course, the main attraction is the stand-up comedy itself. Some of the material is a bit “ignorant American” formulaic — gee, foreign names sure are hard to pronounce! — but I was extremely impressed with the way Dunham was able to cater a significant portion of his act to each stop. (More on this in the Special Features section.) Obviously, all smart comics adjust their material to the audience they are entertaining, but Dunham’s challenge was a little different this time around.

His most popular character is almost certainly Achmed the Dead Terrorist, which resulted in the tensest moments of the tour. (Meanwhile, Achmed’s catchphrase — “I keel you!”— yielded some of the more groan-worthy punchlines, like the time Achmed said “I kilt you!” in Scotland and “IKEA you!” in Norway.) Those tense moments mostly came in Malaysia, where Dunham was forbidden from joking about religion, sex, and politics and wasn’t even allowed to say the word “Achmed.” (We never see them, but Dunham gets plenty of comedic mileage out of some armed, uniformed personnel off to the side of the stage during his performance.) I won’t give away what happens; I’ll just say Dunham’s funny, creative solution is one of the highlights of All Over the Map.

The rest of the special is consistently entertaining, even if it doesn’t quite capture the energy of the Malaysia show. A lot of the punchlines can be seen from half a mile away, but Dunham is still able to manipulate his impressive puppets in a way that earns a few extra laughs that probably wouldn’t be there if he were on stage by himself. Dunham also shines when he interacts with the audience in an off-the-cuff way, whether it’s his funny responses during Q&A segments or by heckling whatever poor soul happened to be sitting in the front row.

In addition to Achmed, Dunham brought along cranky old Walter, crazed/crass muppet Peanut, and dim-witted Bubba J. (Jose Jalapeño on a Stick is promoted in the Blu-ray case, but doesn’t appear in the final cut.) I could personally take or leave Bubba J and Peanut, and some of the jokes are repetitive. (You’re not gonna believe this, but beer-loving Bubba J is excited to hang out in Ireland, Scotland and Australia.) However, the show is edited in a way that you don’t stay with one character for very long. By my totally unofficial calculations, this resulted in Achmed and Walter (my personal favorite) getting most of the screen time. Walter — with his perpetually furrowed brow and crossed arms — earns laughs just by scanning the crowd in each country. I also enjoyed his cranky sarcasm whenever Jeff tried to bring up a bit of local trivia.

In the end, the scattered, frequently-funny All Over the Map absolutely lives up to its name.

Jeff Dunham: All Over the Map is presented in an aspect ratio of 1.78:1. The 1080p image is arrived at with an AVC MPEG-4 codec at an average of 22 mbps. There’s obviously quite a bit more going on here than what you get in the average stand-up comedy special. The concert scenes are hit-or-miss in terms of clarity and sharpness. Basic medium shots during performance clips look better in some countries (like Norway) than they do in others, which feature unappealing noise, murky black levels, and a softer image. The good news is virtually all of the scenes on the road look terrific and display a nice, varied palette. (Chillier in Iceland and Norway; overly bright and golden-hued in Israel.)

The Dolby TrueHD 5.1 track gives you the option of watching Dunham’s routine uncensored or with the curse words bleeped out. Beyond that, there’s not a ton going on. There’s good balance here and the jokes can be heard clearly through the front speakers. Meanwhile, crowd laughter and applause are nicely separated and confined to the rears. The surround sound field during the travelogue scenes is pretty quiet, but I don’t suspect anyone picked up this disc expecting a sonic feast.

Road to Scotland: (5:24) We get footage of Dunham on a tour bus talking about his career. Doesn’t sound like much, but it’s my favorite special feature on the disc. The comic discusses adjusting his act for each city mere hours before every show. He also reveals the kind of a crowd he likes to perform for — with good energy, but not so good that they burn themselves out too early — and we also learn that he has no duplicates of Achmed, Walter and the rest of the gang.

Jeff Meets Some Competition: (2:28) Dunham pals around with a young aspiring ventriloquist and gives him a quick tutorial. Cute little special feature.

Malaysia Warning: (3:17) Dunham appears on a Malaysian radio show and receives tips from the enthusiastic host as to how he can perform his act without delving into “religion, sex, and politics.” Walter also makes an appearance here.

Making Jacques: (2:44) Details Dunham’s ingenious response to not being able to use Achmed in Malaysia.

Extreme Travel (0 to 110 Degrees): (2:10) Clips of some of the outdoors-y activities Dunham and his crew indulged in on the road. The lone useless special feature on this disc.

Jeff Dunham has tried starring in a TV series and dipped his toe into animation. However, he’s never better than when he takes to the stage to entertain a live audience.

I happen to think Dunham is more effective in smaller, YouTube-size doses than he is over an extended period of time, when it’s easier to notice the sameness of his gently un-PC humor. All Over the Map may be precisely what it states in its title, but it also presents Dunham in a quick-hit way that makes the material feel fresher and more effective.

If you’re a die-hard fan of Dunham’s, you’re checking this out no matter what…and you won’t be disappointed. If you’re more of a casual fan (like me), there’s a good chance you’ll still be thoroughly entertained throughout the show.