Posted in: Uncategorized by Gino Sassani on December 10th, 2014 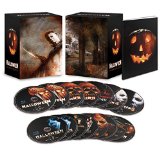 So you have a horror fan on your shopping list this year. You’re not sure if they like classic or slasher. Do they appreciate the wonderful films of the past, or do they like to go for the jugular? You know there’s a ton of horror titles out there, but which ones are any good? You also want this gift to be something special. The guy at the store doesn’t know Frankenstein from Jason. You ask for his help, and he looks at you like something out of The Walking Dead. Shopping for a horror title scares you more than a walk at Camp Crystal Lake with a bullseye tattooed on your face. Don’t lose your head over this one. Anchor Bay and Shout Factory’s Scream Factory have that perfect special gift. It’s The Halloween Collection. You get the classic John Carpenter film and all of the slash-fest sequels as well. It’s 10 films in one high-definition splatter festival. And it won’t cost you an arm and a leg… well maybe a foot.

“I met him fifteen years ago; I was told there was nothing left; no reason, no conscience, no understanding; and even the most rudimentary sense of life or death, of good or evil, right or wrong. I met this six-year-old child, with this blank, pale, emotionless face, and the blackest eyes… the devil’s eyes. I spent eight years trying to reach him, and then another seven trying to keep him locked up because I realized that what was living behind that boy’s eyes was purely and simply… evil.”

AnchorBay and Scream Factory have tapped into that pure evil. It’s the collection we’ve waited years to see.

This collection is a fine one indeed. You get all 10 films and extra versions of three of them. There’s the vintage features and plenty of new stuff filmed by Shout’s Red Shirt Productions. Hours and hours of this stuff dominate this huge 15-disc set. It’s a collection every horror fan must have. Even with the stinkers, every film now has a place in horror film history.

In 1968 Marvin Gaye / Tammi Terrell hit the American pop charts with the song Ain’t Nothing Like The Real Thing. They didn’t know it at the time, of course, but they were talking about John Carpenter’s original 1978 Halloween. The sad fact is that this original classic sometimes gets lost, or worse, considered along with the various sequels and remakes. It’s a crime, to be sure. The first film is nothing like anything that followed and should be considered more as a standalone film than it is now. That’s not to say we should dismiss the influence the movie has had on American cinema. Halloween certainly wasn’t the first slasher movie. It did establish some genre rules that have been followed for decades to come. It might well be one of the most imitated films in the genre. Now you can compare it to all that followed. There are good and bad films here. You decide which is which. Now you can watch them all. I did just that in two nights. Good, bad, or ugly, “It’s Halloween, everyone’s entitled to one good scare.”

Gino Sassani is a member of the Southeastern Film Critic's Association (SEFCA). He is a film and television critic based in Tampa, Florida. He's also the Senior Editor here at Upcomingdiscs. Gino started reviewing films in the early 1990's as a segment of his local television show Focus. He's an award-winning recording artist for Omega Records. Gino is currently working on his 8th album Merchants & Mercenaries. Gino took over Upcomingdiscs Dec 1, 2008. He works out of a home theater he calls The Reel World. Favorite films: The Godfather, The Godfather Part II, The Body Snatcher (Val Lewton film with Karloff and Lugosi, not the pod people film), Unforgiven, Gladiator, The Lion King, Jaws, Son Of Frankenstein, The Good, The Bad And The Ugly, and Monsters, Inc.
Nymphomaniac: Extended Director’s Cut Volume 1 & 2 Broad City: Season 1