Posted in: No Huddle by Archive Authors on December 10th, 2014 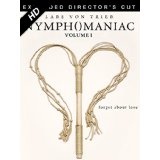 The story is simple. It chronicles a conversation between two people. Joe (Charlotte Gainsbourg) is found bloody and beaten in an alley by an older man, Seligman (Stellan Skarsgard). He takes her to his sparse flat to care for her and help her. What takes place is a long conversation full of intellectual digressions about Joe. It slowly reveals what led to her downfall. Seligman is a sheltered bookworm who has a detached curiosity about her story.

The cast is impressive including Shia LeBeouf, Uma Thurman, Christian Slater, Jamie Bell, Willem Dafoe, Connie Nielsen, Udo Kier among others. The director is Lars von Trier, the famed Danish auteur and provocateur. Von Trier has always tried to find hidden and shameful areas of human behaviors in his films. Many of his films are rigorous exercises in the depths of human pain. They attempt to push expectations. They explore behaviors that seem too absurd to be real, but that is because most of us refuse to acknowledge certain parts of ourselves.

The film is very sober and serious with a classic artistic and intellectual intent. I say that because its goal is to get to the roots of human sexuality. It wants to explore the psychological compulsions that send the human mind off in radically different directions in each person. We are all sexual beings, but all of us hide some part of what is inside us with a degree of shame. Seligman seems to have no sexuality at all, while Joe seems to be on an endless search to satisfy an unquenchable desire.

The film starts in her youth where from 2 to 12 she is slowly becoming aware of her sexuality. As a young woman she enters a competition with another girl to sleep with as many men on a train as they can. This kind of reckless sexual adventure escalates as she tells her tale to Seligman.

The most important aspect of Nymphomaniac for most people will be the explicitness of the sexuality.

I will say that anyone who sees this film would not think it is pornography. In its extended length you will see scenes that break the rules of what is acceptable, if you care about those sorts of things. The fact that it breaks those rules and the way that it does it will force you to confront how you feel. You may be repulsed or amused or bored or excited. I would agree with any of those reactions. The context in which the film displays various scenes removes them from the expected connotations.

Part of how you view this film will probably be colored by how you feel about its controversial director. Von Trier is variously considered to be many things. Some view him as a mad tyrant with his cast and crew. Some see him as a reckless clown with his antics in the media. He courts expectations of an audience, who view him as either a genius or a fraud. Some of his other projects which have won awards include Breaking the Waves, Kingdom Hospital, Dancer in the Dark, Dogville, Manderlay, Antichrist and Melancholia.

Great art will defy expectations, but it is a tightrope. It will force argument and encourage ridicule. This film definitely causes that reaction. That means it might very well cause you to laugh in derision. It verges on ridiculousness on many occasions. It is both intensely serious and absurdly funny. The film will work on different centers of the brain than simple skin flicks. Expect the film to push your boundaries. The part with the professional sadist was the roughest for me.

One aspect that will surely enter your mind is the commitment of the actors who participate in activities that one would basically equate with prostitution. That is the mystery of sexuality. The script obviously intrigued all the A-list talent with its seriousness and intelligence, but it is a mystery. What did they all see in this project? We assume it appealed to those deep hidden parts of themselves they were trying to explore. Are we all really controlled by our impulses, impulses we don’t really understand?

The extended director’s cut of Nymphomaniac I & II has arrived, and it comes in two discs, one is 148 minutes and the second 178 minutes. That compares to the original version which was divided into 117 and 128 minute segments. I can’t say I have the fortitude to compare the two side by side to get a full understanding of the differences, but it is clear the intellectual digressions were definitely expanded.

I’m chuckling right now because this week Entertainment Weekly released its best and worst list for 2014. Nymphomaniac I & II has achieved the great honor of worst film of the year. Entertainment Weekly used to have two critics in the film section with dueling best-of-the-year lists. They are both gone and have been replaced by a single megalomaniac as a replacement. He throws around words like hackwork and hooey, but I’m not sure he should throw around a big word like hooey. He also insults a lot of critics by claiming they bent themselves into knots looking for a nonexistent feminist subtext. I think he needs to get his eyes checked if he can’t see the feminist subtext.

Nymphomaniac may not be the best film of the year, but it is a work of real art. It gropes and grasps for answers that very few are looking for and is equipped with the ability to do so. The fact that it is ridiculous at some moments and boring at others only legitimatizes it even more. Its attempts to search in such extreme areas of the spectrum give it great merit. We are awash in mediocrity, and Entertainment Weekly is supposed to be the guardian of the gate, but it is failing. It is too busy chasing every pop sensation and obsessing over mass-market Pablum. One of the magazine’s biggest problems is that it is too comprehensive of the modern culture, and, frankly, the modern culture is cluttered with crap. Nymphomaniac is not in my top ten of the year, but I could name 200 films this year that were much worse than it was.

This new extended director’s cut also includes extras like examination of the film as a whole, the director and the sex in the film. It is hilarious to find out that according to the included interviews the sex was done with special effects. I wouldn’t be surprised if this wasn’t one last practical joke engineered by the director. That Lars Von Trier is one wacky guy.