Guardians of the Galaxy

Posted in: No Huddle by Brent Lorentson on December 15th, 2014 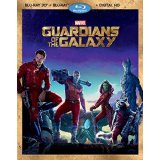 “Are you telling me that the fate of thirty million inhabitants is in the hands of these criminals?”

Now that we are in the middle of phase two of Marvel’s movie universe, a new batch of characters have been given a movie of their own to help set the stage for what is to come in the ever-expanding Marvel cinematic universe.  The Guardians of the Galaxy announcement for many left fans scratching their heads; after all, just how would a talking raccoon, a lumbering tree and various other space aliens fit in with the established Avengers team comic and film fans have grown to love already?

Where Iron-Man, Captain America, and the rest of the Avengers team got to have solo films to help introduce audiences to their characters and other fellow characters that fill the backgrounds of their story, Guardians of the Galaxy is faced with the dilemma of delivering an origin of the entire team.  Do we get the back story to everyone? No, but that’s fine, because that is part of what makes all these characters that much more interesting. We simply don’t know if we can trust these characters.  Where the Avengers team is based around characters we can all root for, Guardians of the Galaxy is that ragtag team of rogues that come together because they want to save the galaxy, because they are in it.

Leading the team is Peter Quill (Chris Pratt), who is struggling to make a name for himself as an outlaw by the name of Star-Lord.  The introduction of Quill is by far one of the best character introductions in the Marvel film universe, following him from his tragic loss as a child, then jumping ahead where we see him in one of the more entertaining credit openings as “Come and Get Your Love” plays out.  Quill is a guy you just can’t help but want to root for, as he somewhat reminds me of a hybrid of Han Solo and Indiana Jones.  It’s when Star-Lord comes across a special orb that he is set off on his journey.

It’s because of this orb a bounty is placed on Star-Lord’s head which brings out a pair of bounty hunters, Rocket Raccoon (Bradley Cooper) and Groot (Vin Diesel) who again bring a nice dynamic to the film that most kids I’d imagine will take a liking to.  I wasn’t so sure how I’d feel about a foul-mouthed hotheaded raccoon and a large tree fitting into the Marvel cinematic world, but the effects are simply phenomenal in this department.  Joining the fray, with her eyes on the orb, is Gamora (Zoe Saldana).  If there was a character that I wish was given a little more back story, it would be her.  I want to tread lightly with what I say about her for those who want as few spoilers as possible, but I can’t help but wish we had more back story about who she “works” for.  This background would have come in handy simply because later in the film when she decides to join with Star-Lord it would feel like such a drastic change in disposition.

The biggest surprise in the casting for me was pro-wrestler Dave Bautista in the role of Drax.  It’s no stretch to imagine him as a hulking brute who has an insatiable lust for violence and need to avenge his family’s murder.  But the surprise came with how funny the guy turned out to be.  His deadpan delivery of lines throughout the film gave me some of the biggest laughs.

Besides the great cast, I haven’t even mentioned Glen Close, Lee Pace, Djimon Hounsou, John C. Reilly and Michael Rooker.  But the biggest star is the film’s special effects.  Back when Disney made the big purchase of Lucas films, in the deal they picked up ILM (Hollywood’s biggest and most established effects company), and it’s in this film that we get more than just of glimpse of their effects wizardry, whether it’s in the creation of the multiple worlds on the planets or the amazing over-the-top dogfights with the spaceships.  Heck, the characters of Groot and Rocket look so good it will leave kids wishing you could simply find a Rocket of your own or a Groot you can grow in your back yard. Just about every frame of this film is filled with beautiful special effects that just suck you into this world.  This film is almost like an appetizer of what is to come when the next Star Wars film comes out.

When co-writer and director James Gunn came on board to helm this project, I was more than a little surprised by this decision.  After all, his last foray into costumed heroes was the dark comedy Super with Rain Wilson and Kevin Bacon (I’m sure this connection to Gunn is a reason for a certain Kevin Bacon joke in the film). It’s a fun little movie, but nothing about the film would have me think that Gunn was the perfect guy to helm such a large feature.  But Gunn succeeds on every level in delivering a funny, fast-paced space opera that is on par with the original Star Wars trilogy. The way he handles the multiple planets and worlds, each having its own distinct look but always feeling real instead of CGI, is a feat in itself.

The approach to the picture is another thing that is something I have to commend.  Gunn and company seem to understand they have a lot of story to cram into a meager two hours by bringing the characters in together where they bond over a prison break and continue on their seemingly impossible mission.  It’s almost impossible to not want to draw comparisons and call it the Dirty Dozen in space or call back to the great pulpy guys on a war mission films of the 60’s and 70’s.  Because that is what Guardians of the Galaxy is: a great over-the-top pulp-like film, just as the first Star Wars film set out to be.

What I love so much about this film and what separates it from the pack is the fact that the Guardians of the Galaxy embrace their place in the universe as anti-heroes.  I always enjoyed the characters in comics and film that toe the line between right and wrong instead of being the all-out fighters for good like Captain America or Spider-Man. What I see happening after the release of the film, and what excites me most of all, is that I see a splintering of fans of the Marvel film universe between who is Team Avengers and who becomes Team Guardians; though both may be on the same side, both have their own way of doing things.

Extras include a pretty expansive commentary track by Gunn. There are six deleted scenes and a couple of short behind-the-scenes features. We were not given the 3D or the complete Blu-ray release to review, so there’s not much we can tell you about those aspects.

Personally this is my favorite Marvel Universe film to date; I loved this film so much it’s gotten me to dust off my old collection of comics and has me reading them all over again.  With the recent announcement out of Comic Con in San Diego for Guardians of the Galaxy 2 in 2017, it seems the heads of Disney and Marvel are also pleased with what they see.  I can’t help but be excited about what is to come of these misfits in space and the potential crossover with the Avengers, which I’m sure like everything else that has been Marvel- related, will be epic.

“What should we do next?  Something good, something bad?”

Brent Lorentson is a horror writer and film critic based out of Tampa, Florida. With a BA in Digital Film, he co-wrote and co-directed Scavenger Hunt. His short stories have appeared in various horror anthologies. In 2019 his short script Fertile Blood will be a part of the anthology horror film Slumber Party. He is currently working on his first novel A Dark and Secret Place set to be released in late 2019. Favorite Films: Taxi Driver, Fight Club, I Saw the Devil, The Wild Bunch, Dawn of the Dead, A Clockwork Orange, Pulp Fiction, Heathers, The Monster Squad, and High Fidelity.
Exodus: Gods and Kings Drunk History Seasons 1 and 2