Posted in: No Huddle by Archive Authors on December 15th, 2014 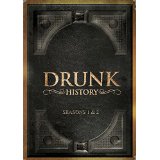 Drunk History was inspired by a conversation the creator of the show, Derek Waters, had with actor Jake Johnson (New Girl). Johnson was drunk and told Waters a crazy story about Otis Redding predicting the plane he was getting on was going to crash. Waters took that germ and refined it considerably with co-conspirator Jeremy Konner. They released some videos on Funny or Die (that are readily available on Youtube). They have since made shows for Comedy Central, which are the two seasons included here in this collection.

Two disclaimers should be made right up front. You should not get this drunk at home, kids, but anyone watching will probably be dissuaded from ever drinking again after seeing the narrators make complete fools of themselves. Also, you should be warned that the narrators are not bleeped on the DVD, because there is liberal use of a certain word that is always bleeped on TV. It should be also noted that various bodily functions kick in periodically (burping being the least offensive). On the other hand, the creators claim that all the history recounted is verified and accurate. I can’t verify it, but they do. I believe it is fundamentally correct even though these story tellers often make segues, sidetracks and digressions that are outrageous. That’s the fun of it, though. It may seem infantile, juvenile and childish, but these are adults with too much to drink.

Overall, I think the show is both funny and informative. At the very least, it will spark your curiosity to expand your knowledge about the endless diversity in human history. There is so much history to absorb that these entertaining tidbits are probably one of the best ways to force someone to drag some books off the shelves (or at least check the Google and Wikipedia).

One of my favorite episodes is about Kellogg brothers with Luke and Owen Wilson whose story was previously recounted in the film The Road To Wellville (strangely similar to the story of Thomas Jefferson and John Adams) but historical figures as diverse as Dolly Parton, Ralph Nader, Nikola Tesla and Harry Houdini are included.

As I warned at the beginning of this review, this is not for everyone. I would not give this to your 12-year-old if he is having problems getting an A in history but if a parent wants to watch this first and then give it to him, I have no problem with that. I’ll watch it again and hope they have a third season, but I will classify this as a guilty pleasure. I will add one thing. I noticed the narrators often drank absinthe. I thought that was illegal. They should do a show about it.

Guardians of the Galaxy The Skeleton Twins (Blu-ray)