Posted in: No Huddle by Brent Lorentson on December 15th, 2014 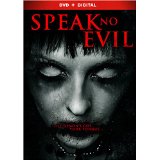 With the exception of killer clowns, I think the creepiest villains you can find in a horror film are possessed kids.  After all, they’re kids, so the knee-jerk reaction of letting them be overtaken by evil or letting them die is a bad thing in many circles.  Personally, if I’m being chased by some murderous kid who claims to have the devil in him, well, I’m not taking any chances, and they are going to end up on the unfriendly end of a handgun.  Thankfully I don’t believe the evil will be rising any time soon to kick off the ultimate war between good and evil.

In the new horror film Speak No Evil, the members of a small town are confronted with the dilemma “to kill, or to pray” after the children of their town are possessed by an evil that seems to have an unquenchable thirst for murder.   Seeing possessed kids isn’t anything new; in fact Here Comes The Devil and Come Out And Play are a pair of recent releases that set the standard for creepy possessed kids films.  Oddly enough, if you were to blend the plots of these two films together, you would get Speak No Evil, unfortunately without as much impact.

Anna (Gabrielle Stone) is a single mother who is doing her best to raise her little girl Joey.  When her daughter goes missing, Anna is ready to scour the Earth to find her daughter, only what she eventually discovers is that her child is not the only one missing.  Stone does her best to make this character someone we want to root for, but the script just makes this so difficult.  We see all ranges of emotion from Stone, but the emotions are just all over the place, and we never really get to appreciate the desperation of losing her child.  When the children of the town do return, only now with their lust for blood and murder, there is simply not enough time for us to see any of the characters adjust to this change in their kids, and it just becomes too easy for the parents to reach out to the church to start performing exorcisms on the kids.

Speak No Evil was shot on a very conservative budget, and for that I can appreciate that some liberties need to be taken in telling this story.  Instead of showing some restraint and making this a more personal journey, we are instead thrust into the chaos of how the town is reacting.  Sure, the idea of having numerous bloodthirsty children running amuck in the town may have its appeal, but the film seems to lose traction until Anna finally meets up with her daughter in the final act.  What makes this more problematic is with a run time of not even 80 minutes, time should not be wasted on side stories, and there should be a greater amount of attention focused on Anna and her trying to save her daughter.

What the film does have going for it is that although it is shot on a budget of $150,000, the production values are on a higher scale.  There are some excellent visuals throughout, and above all else I’m grateful the film avoided the overdone found-footage angle.  There is still some off-putting imagery, for instance when a flash of light appears and the characters have visions of a demon, I felt this reflected the kind of imagery we’d expect to find in a film about alien abduction rather than demonic possession.

While I’m not a huge fan of the end result, I can appreciate what writer and director Roze attempted to do here.  With a larger budget I feel the vision he originally set out for the film could have been realized, but unfortunately this is a case where he aimed too big, and in the end we only catch glimpses of the good film this could have been.

Brent Lorentson is a horror writer and film critic based out of Tampa, Florida. With a BA in Digital Film, he co-wrote and co-directed Scavenger Hunt. His short stories have appeared in various horror anthologies. In 2019 his short script Fertile Blood will be a part of the anthology horror film Slumber Party. He is currently working on his first novel A Dark and Secret Place set to be released in late 2019. Favorite Films: Taxi Driver, Fight Club, I Saw the Devil, The Wild Bunch, Dawn of the Dead, A Clockwork Orange, Pulp Fiction, Heathers, The Monster Squad, and High Fidelity.
Jeff Dunham’s Very Special Christmas Special Exodus: Gods and Kings