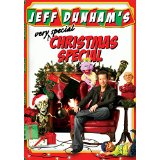 A decent chunk of Jeff Dunham’s Very Special Christmas Special is devoted to taking back the most wonderful time of the year from anyone who insists on saying “Happy Holidays” instead of daring to utter the C-word. The wildly successful comic certainly knows his audience, and the live crowd here eats up Dunham’s assault on rampant political correctness. My feelings on this particular DVD release, on the other hand, are closer to “Bah, humbug!

There are a few different reasons for this. Full disclosure: there’s a slight chance I might be suffering from Jeff Dunham Fatigue. After all, it’s only been a couple of weeks since I reviewed All Over the Map, Dunham’s globe-trotting new stand-up special. On top of that, this isn’t even the first holiday-themed Jeff Dunham comedy special I’ve reviewed for this site. Then again, I quite liked Over the Map because of the efficient ingenuity Dunham displayed in carving out a custom act for each new international city. And Minding the Monsters gave me a new respect for the work and dedication he has put into his craft. The problem is the conceit and jokes on this Christmas Special are comparatively stale and predictable.

Which brings me to the biggest reason I’m down on this release. Dunham actually filmed his Very Special Christmas Special back in 2008 during a stop in Milwaukee. The ensuing Comedy Central stand-up show became the most watched telecast in the network’s history. Not surprisingly, it was released on DVD shortly thereafter courtesy of Image Entertainment. This “new” release comes from Paramount/Comedy Central, but offers nothing in the way of new content or bonus material. (The highlight is a Q&A session with Walter as a cranky Santa.)

Speaking of Walter, let’s talk about the show itself. Very Special Christmas Special opens with Dunham and Walter taking a brief sleigh ride through a thoroughly unconvincing snowscape. Dunham actually leads off the stand-up comedy portion of the special solo. He does a 12-minute bit about how his 16-year-old daughter/novice driver has no idea how to put gas into her car. It’s amusing for a little while, but if dedicating 12 minutes to such a narrow topic seems like too much…well it is.

Before things get too stale, Dunham brings out the big guns. First up is Walter, who is predictably curmudgeonly about Christmas and rails against the political correctness that surrounds the holidays. Walter is followed by Achmed the Dead Terrorist, who performs a Christmas carol called “Jingle Bombs” with “Guitar Guy” Brian Haner. The interactions between Achmed and the Guitar Guy drag on for way too long, which leads me to think Dunham’s material for this portion was a little thin. It’s probably not the best sign that the most amusing part of this segment involves some technical difficulties that Dunham appears to have with the Achmed puppet. Parts of Achmed start falling off, but Dunham recovers very impressively and coins a new disease called “poliosis.”

Dim-witted Bubba J is up next, and he too performs a song with Guitar Guy called “Roadkill Christmas.” The show wraps up with an especially hyperactive Peanut, who is eventually joined by Jose Jalapeño on a Stick. The dexterity with which Dunham handles his characters — especially when he’s juggling two puppets at once — continues to be impressive. The fact that “Jeff” often laughs at the puppets’ jokes — while the characters give him a deadpan look — is a nice touch that helps sell the idea that there are multiple personas stage. Anyway, Peanut and Jeff read “Twas the Night Before Christmas”, with Peanut chiming in to poke fun at certain yuletide traditions. (We hang stockings for Christmas; could jockstraps be far behind?)

Jeff Dunham’s Very Special Christmas Special has some nice little touches — like Peanut’s Christmas-themed shoe — but is a little heavy on the musical parodies and a little light on the new, insightful jokes. Unfortunately, I also have to downgrade this release as a whole for not adding anything new. (There’s no Blu-ray verison of the show, and there’s no option to watch it uncensored.)