Posted in: Podcasts by Gino Sassani on December 16th, 2014 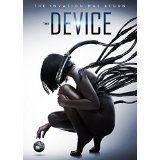 “What if the rumors and urban legends are real… that aliens walk among us, abducting people for unthinkable experiments? Sisters Abby and Rebecca are about to discover the horrifying truth when they find a harmless looking object in the woods near their family’s cabin. The small black sphere is the key to a shocking mystery that will change the course of human destiny. The Device has plans for us, and this world is no longer ours.”

That’s the premise for The Device out now on DVD from RLJ/Image Entertainment. I had a short opportunity to talk to the film’s director: Jeremy Berg. Check out what he has to say and then check out the DVD. Bang it here to listen to my chat with Jeremy Berg.

Gino Sassani is a member of the Southeastern Film Critic's Association (SEFCA). He is a film and television critic based in Tampa, Florida. He's also the Senior Editor here at Upcomingdiscs. Gino started reviewing films in the early 1990's as a segment of his local television show Focus. He's an award-winning recording artist for Omega Records. Gino is currently working on his 8th album Merchants & Mercenaries. Gino took over Upcomingdiscs Dec 1, 2008. He works out of a home theater he calls The Reel World. Favorite films: The Godfather, The Godfather Part II, The Body Snatcher (Val Lewton film with Karloff and Lugosi, not the pod people film), Unforgiven, Gladiator, The Lion King, Jaws, Son Of Frankenstein, The Good, The Bad And The Ugly, and Monsters, Inc.
The Skeleton Twins (Blu-ray) The Hobbit: The Battle of The Five Armies