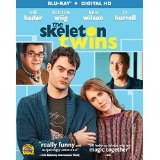 “You know what the sad thing is? We’re a good team.”

Up until they teamed up to star in The Skeleton Twins, there was nothing sad about the team of Kristen Wiig and Bill Hader. Regardless of how you feel about the quality of Saturday Night Live in recent years, Wiig (the only cast member to earn an Oscar nomination — for co-writing Bridesmaids — while still appearing on the show) and Hader (with “Stefon” and a laundry list of impressions that ranged from Alan Alda to Al Pacino) were clear standouts. So you’d expect their first post-SNL big-screen team up to be a laugh riot. That’s not exactly the case.

Need proof? The Skeleton Twins opens with dueling suicide attempts by estranged siblings Milo (Hader) and Maggie (Wiig) Dean. (Well, one of them goes through with the attempt.) Milo is a gay, struggling actor in Los Angeles who is coming off the end of a relationship. Maggie is a quietly desperate dental hygienist married to a relentlessly decent lug named Lance (Luke Wilson). Milo reluctantly agrees to move in with Maggie for a while in their suburban New York hometown. While there, Milo tries to reconnect with former high school teacher Rich (Ty Burrell) with whom he shared a special, life-changing bond. Meanwhile, the more Maggie’s life looks to be perfect from the outside — Lance is keen on having children — the more desperate she seems to wreck it…or escape.

Again, not exactly the sort of material that screams, “This needs to star two comic actors!” But casting two inherently funny people in the title roles turned out to be precisely what this potentially-depressing family drama needed. Director/co-writer Craig Johnson places an admirable amount of trust on his two leads — and on the audience —in telling this affecting story of how people can very easily screw up the way they love each other.

The details of Milo’s relationship with Rich — and the extent of Maggie’s unrest — unfold in gradual, engrossing ways. (As does the fate of their beloved dad.) There are more than a few instances when the camera lingers on Hader or Wiig’s sourpuss mugs during solitary moments. But instead of mugging for a camera in Studio 8H — looking for sympathy or a laugh — they’ve each made an impressive transition into nuanced screen acting. Their faces tell us what’s going on well before the script gets around to doing the job.

Most importantly, the pair’s chummy chemistry is perfect for their roles as estranged siblings. Even though Milo and Maggie haven’t spoken to each other in a decade, Hader and Wiig make it seem totally believable that they’d naturally/grudgingly fall back into old banter and inside jokes. Johnson largely keeps their shtick in check: the exceptions are an overly indulgent, improv-sequence involving nitrus oxide at Maggie’s office, and a lip-synching sequence to Starship’s “Nothing’s Gonna Stop Us Now” that should be painful, but is winningly hilarious because of how committed the actors are.

Hader, in particular, is something of a revelation in his first notable starring/dramatic role. I’ve always thought the comedian was supremely talented, so it was gratifying to see him matched up with a role that took advantage of his rubber-faced features, his sarcastic wit, and the wounded sensitivity he gives off as a performer. (“Wounded” is pretty much all he had to play in his appearances as Fleetwood Mac’s Lindsey Buckingham on SNL.) Wiig, who often played broad, abrasive characters in sketches, continues to smartly go in the other direction with her big-screen work. Her Maggie is slouchy and passive in everyday life, but Wiig is adept at showing us how she subtly comes to life around Milo.

Wilson also does funny, quietly humane work. Lance could’ve easily turned into a cheery caricature; instead, he’s so unfailingly upbeat that you start to understand why Maggie feels she can’t match his temperament. Burrell appears for a handful of scenes, but skillfully conveys a lot in each of them; Rich is a complex character that (again) could’ve been a cold, one-dimensional jerk in less capable hands. Joanna Gleason only has one scene as Milo and Maggie’s phenomenally self-involved mother, but it’s enough to bring the bitter best out of Wiig.

In the end, The Skeleton Twins is a (non-romantic) love story between Milo and Maggie, and how it’s sometimes hard to tell if you’re helping the person you love the most or wrecking their lives.

The Skeleton Twins is presented in an aspect ratio of 2.40:1. The 1080p image is arrived at with an AVC MPEG-4 codec at an average of 31 mbps. The film is set almost entirely in suburban New York in the weeks leading up to Halloween. As a result, we get a crisp, autumnal palette with plenty of fine detail and earthy colors. Cinematographer Reed Morano also uses a fair amount of natural sunlight coming in through windows — and some slight overexposure during flashbacks — to achieve an occasionally soft, dreamy look to the film. (With the idea being that Milo and Maggie are sort of sleepwalking through their lives.) Black levels are good, not great; they’re only really a factor during the Halloween Night sequence toward the end.

The DTS-HD Master Audio 5.1 track is, not surprisingly, dialogue-driven and not a show-off title by any means. However, the dialogue we do get is as crisp and clear as the October weather in the film. Nathan Larson’s score largely remains in the front speakers, leaving the rears to crank out subtle background noise like birds in the forest or bar chatter. (As opposed to a lot of tracks that like to envelop the listener in the film’s music.) While this more understated approach won’t knock any socks off, I think it served this particular material better.

Feature Commentary with director/co-writer Craig Johnson, and stars Kristen Wiig and Bill Hader: To the surprise of absolutely no one, Hader and Wiig spend almost the entire track yukking it up — doing jokes on everything from the production company logo to the curtains in certain scenes — while Johnson hopelessly tries to discuss the production. He wisely gives up early on and joins in on the goofiness.

Feature Commentary with director/co-writer Craig Johnson, co-writer Mark Heyman, and producer/editor Jennifer Lee: If you’re looking for a track that discusses the production, then this is the place for you. Johnson and Heyman were NYU film school pals who decided to write a movie together. It’s amusing listening to them discuss tone; at one point in the script’s development, Milo was a drag queen and Maggie took Rich on a violently wild ride. (Johnson and Heyman joke it was closer to Showgirls than what they eventually put on the screen.)

To Whom It May Concern: Making The Skeleton Twins: (15:14) A fairly standard featurette that includes cast and crew commentaries. Johnson talks about how the movie was seven years in the making and the tricky job of balancing the film’s funny and somber tone. Hader relays his surprise at landing his first starring role. (The comic/actor said they don’t even send him scripts like this one.) Not surprisingly, Hader and Wiig seem to have a brother/sister-like relationship in real life.

Sweet Moves: (1:35) Basically a dance-themed montage of the cast and crew goofing off between takes.

Gag Reel: (3:36) Given the cast, it’s not surprising there was lots of laughter on this particular set. This is more like your typical gag reel, but it feels redundant to have both this and “Sweet Moves.” It should’ve been one or the other. (Or mash them together.)

Outtakes: (5:03) Since the flubbed lines were covered in the gag reel, this material is closer to extended/alternate takes. The amusingly unimaginative chapter titles are “Luke Wilson ‘Fat Kid’ Improv” (0:26), “Sea Turtles Bill Hader Break” (0:55), “Maggie and (SPOILER) Sex Scene Outtake” (0:28), and Kristen Wiig and Bill Hader Improv for Dentist Scene (3:14). There is no Play All option.

Deleted Scenes with Optional Commentary by director/co-writer Craig Johnson: (15:54) There are 12 chapters in all, and I recommend you watch them with Johnson’s commentary. He talks about cutting expository scenes because they were redundant, and cutting a late, touching moment between Maggie and Lance because the heart of the movie was Maggie and Milo.

Don’t be fooled by the fact that The Skeleton Twins stars two funny people. This is a family drama through and through that happens to be indispensably lightened and elevated by two talented performers. The special features on this Blu-ray also give you a better appreciation for how Johnson was able to wrangle his two leading goofballs long enough for them to play it (mostly) straight.