Day of the Mummy

Posted in: No Huddle by Jeremy Butler on December 22nd, 2014 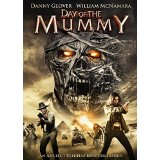 Cursed mummies have been a part of cinema dating as far back as you can likely imagine. That being said, I won’t call it worthy of his own subcategory or say that there aren’t new avenues to take with the premise. However, I will say that I find it difficult to imagine new approaches given that the films of the past have already found some truly entertaining avenues already. Day of the Mummy deserves credit for the unique avenue it attempted to take, but it doesn’t deserve much of anything else after that.

First person point of view, I suppose, would be the best way to sum up the way the film was administered in that every angle of the film came from a webcam or the special spy glasses our main characters wore throughout the film. At first an interesting idea which brought of fond memories video game series Doom, the novelty quickly wore off within the first twenty minutes, and afterwards it become clear that the film truly lacked depth and wasted much of its runtime telling the story of traveling to retrieve the Codex stone rather than the adventure of battling for survival. Given that the runtime was already under the normally standard 90 minute running time, the brief time would have been better spent on an epic battle between humans and zombie mummies (who doesn’t love a good mummy fight, right?) or giving a more in-depth backstory instead of learning of the legend of the supposed Codex stone secondhand from the characters. The film spent over half the running time traveling to the destination and even more time leading into an underwhelming battle that few will survive (mainly referring to the audience).

Danny Glover wasn’t enough to save this one, I’m afraid, especially given that it appears he really is getting too old for this s*&$, seeing as he is nothing more than a little box that appears in the corner of the spy glasses. I wasn’t expecting him to be an action stud, but I was extremely disappointed that he plays such a small role in the overall film, making it obvious that attaching his name was in hopes of drawing folks in rather launching a comeback. Oh well, it was still nice to see him given that the rest of cast weren’t anything to write home about. Our lead character is essentially nothing more than a voice, given that he is rarely seen on-screen due to the perspective view of the film. The female lead is introduced as a mercenary, but when it came down to it was more liability than asset, and the rest of the cast are easily ignored for failing to provide anything to make them stand out.

I won’t say that the film should have never been made, but I don’t see it offering a real contribution to the mummy horror genre. Other than the camera angle, nothing really sets the film apart.

Jeremy Butler is a film school graduate of the International Academy of Design and Technology. He is been writing for Upcomingdiscs since 2012; however, movies have played a big part of his life for much longer. Favorite genres include horror, science fiction/fantasy, and comedy. Favorite movies are V for Vendetta, Boondocks Saints, Kiss Kiss Bang Bang, and The Godfather.
Annie (2014) Holiday Gift Guide Spotlight: CBS Television