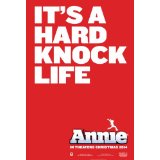 – “There she is, our little orphan Annie.”

“Little Orphan Annie” began life as a comic strip way back in 1924, but the resourceful and irresistible character probably achieved her greatest prominence after the 1977 debut of the Broadway musical “Annie.” Although there have been other theatrical productions and movies, it’s been a bit of a while since Annie first became a big deal. So I certainly understand the impulse to modernize the story for 21st century audiences. What I don’t understand is why the makers of this new version also seem eager to blow up the beloved source material.

It goes beyond having this new Annie semantically rail against being called a “little orphan.” The movie opens with a very familiar image: a curly-haired, red-headed moppet stands in front of a classroom and delivers an overly earnest presentation. Once she’s done, the teacher calls on “Annie B.” (Quvenzhane Wallis), who is the physical and temperamental opposite of “Annie A.” thanks to her own unruly curls and the funky flow she uses to deliver her presentation on FDR’s New Deal. The message is astoundingly obvious from the very beginning: this is not your grandmother’s Annie.

Then again, that much has been clear since 2011, when it was first announced that rapper/mogul Jay-Z wanted to team up with power couple Will and Jada Pinkett Smith to produce a hip-hop flavored remake of Annie. Obviously, that trio wouldn’t team up to produce a straight-up adaptation of the musical, which John Huston already did in 1982 along with a “Wonderful World of Disney” TV movie directed by Rob Marshall (Chicago). So the fact that this newest movie goes so far out of its way so early and so often to prove it’s a different enterprise feels wholly unnecessary.

The structure of the story is similar enough. This Annie was abandoned by her parents, but believes they’ll one day come back to claim her. She lives in a foster home run by boozy has-been Colleen Hannigan (Cameron Diaz). One day Annie’s life is saved by xenophobic billionaire cell phone mogul Will Stacks (Jamie Foxx), who is in the middle of an embarrassing campaign for mayor of New York City. Stacks’ heroic deed is captured via cell phone camera and goes viral. (This is an example of a modern touch that actually works.) After seeing the boost in popularity he receives because of Annie, Stacks’ weaselly advisor Guy (Bobby Cannavale) implores him to spend more time with the photogenic little girl. The ploy works, and Annie ends up moving in with Stacks and charming everyone in his life, including loyal assistant Grace (Rose Byrne). It’s no spoiler to say that Annie’s spunk even winds up melting Stacks’ anti-social heart.

It’s a harmless enough story, and one that could potentially appeal to young viewers. (The montages of Annie living the high life in Stacks’ impossibly high-tech apartment are pure wish fulfillment.) The problem is director Will Gluck — who co-wrote the screenplay with Aline Brosh McKenna — can’t seem to settle on a tone. Much of the film is told from Annie’s perspective, which explains a lot of the overly juvenile gags and humor — Stacks spits up food…a lot — that are likely to make adults in the audience cringe. Then again, whenever the action moves to Stacks’ political ambitions or Hannigan’s drunken ravings, I feel like a lot of the knowing jokes — Hannigan was in C&C Music Factory before the group hit it big — will sail right over kids’ heads…assuming they’re even paying attention to these moments. It’s a disappointing development because Gluck knows how to modernize an old story: he previously directed the great Easy A, which was a contemporary riff on “The Scarlett Letter.”

Annie is also very much a musical. I’ve avoided talking about the movie’s musical numbers this long on purpose. They are absolutely painful. And it’s not just the addition of pulsating percussion and bass to songs that don’t need them at all. (Jay-Z had one of his biggest hits doing precisely that; on the other hand, it doesn’t work quite as well on a soaring song like “Tomorrow.”) The issue is the grating, artificial sheen to most of the musical numbers. “I Think I’m Gonna Like It Here” is like a Disney Channel music video nightmare, and I don’t even want to talk about what they did to “Easy Street.” (Do yourself a favor and just watch the underrated “Easy Street” from the 1999 TV movie with Kathy Bates, Alan Cumming and Kristin Chenoweth instead. You’ll thank me later.)

It would also help if these actors could, you know, sing! Foxx, a Grammy winner in addition to his Oscar for playing Ray Charles, obviously acquits himself very well during his showcase “The City’s Yours” song. (That song was co-written by pop singer Sia, who also arranged and co-wrote other tunes on the soundtrack.) But his silky smooth vocals stick out like a sore thumb compared to the rest of the cast, who sound overproduced within an inch of their lives. It’s a shame because a couple of the numbers actually pop. Hannigan’s pill-and-booze-addled “Little Girls” had the most clever visual presentation, but Diaz’s phony sounding vocals ultimately detracted from the sequence.

As a result, the most entertaining parts of the movie were the non-musical sequences. Foxx gives an amusingly fussy performance, while Diaz seems to have been handed a note that simply instructed her to play the personification of a “hot mess.” Byrne is warm and sympathetic as Grace (no accident that her name is “Grace”) but shares zero chemistry with Foxx, while Cannavale has fun and scores a few laughs (or at least amused chuckles) as the conniving Guy. The movie’s best weapon is actually Wallis. Her Annie is slightly older than we’re used to seeing, which makes her street smarts more believable. Wallis has an inherent likability that helps you overlook some awkward line readings; she’s likely to win you over the same way she wins Stacks over, despite your better judgment.

It’s still not nearly enough to recommend you see this tone-deaf adaptation. (Even the film’s movie-within-a-movie Twilight parody — featuring a few famous faces making cameos — feels like it’s a couple of years too late.) The bottom line is the people who made this version of Annie don’t seem to have much affection for the original material. So instead of telling a story they’re passionate about, these filmmakers are pretty transparent about simply trying to tap into a new fan base. It’s savvy business, but it doesn’t exactly inspire great filmmaking. Or, in this case, even good filmmaking.

Finding Joy Day of the Mummy