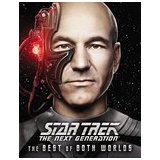 Nearly 20 years after the original Star Trek left the network airwaves, Gene Roddenberry set out to discover if he could catch lightning in a bottle once again. Some say he did an even better job with Star Trek: The Next Generation. There are times I tend to agree. The Star Trek sequel series had a lot more advantages from the moment it was conceived. Star Trek, a series that barely registered on the ratings during its three-year primetime voyage, became a huge sensation in syndication. By the time Next Generation came on the scene, the original show had been syndicated in over 20 different languages all over the world. It had launched an animated series, and a fifth feature film was already in the early stages of consideration. So it isn’t quite fair to judge the success or quality of The Next Generation over the original series. One thing is inarguable. The second would never have existed if not for the first.

The show did have some things working against it. There was the wrath not of Khan but of millions of Star Trek fans if they didn’t get it right. Beloved shows are almost never successful a second time. The show was also going to appear directly in syndication, where the first show really broke out. That’s fine for second run, but it was not a smart move in 1986 for a first-run series. It had never been done successfully, and it would mean markets where the show simply wouldn’t even be available. There was no internet or streaming shows back then. Now, this did also provide an advantage in that there were no network censors to deal with, and Roddenberry would finally have the freedom he never had in the 1960s to tell the stories he wanted to tell in the way he wanted to tell them. With all of this, the future didn’t look so bright for this sequel.

But the one thing Roddenberry did do right was to expand rather than remake his original show. It was still too early for fans to accept other actors in the roles of Kirk and Spock. Too often shows try to reinvent characters that appear to kiss off the original fans. ABC’s attempt to remake Kolchak: The Night Stalker is a good example. Imagine if their character had been a relative of the original Kolchak instead of trying to completely change the personality of the original. Roddenberry wasn’t remaking Star Trek. He brought us a new Enterprise with a new crew and a glimpse nearly 100 years into the future of the old show. It was a rather brilliant move, and it certainly resurrected Star Trek to new heights. We felt like we could fall in love with these guys without betraying the ones we already loved.

With the help of an infusion of cash from Netflix to be the exclusive stream supplier of Star Trek television, Paramount decided to give the series a high-definition facelift. You won’t find the dramatic effects changes here that you did on the original series. Where it was possible to find original material the crew used it and remastered it all in high definition. There are some notable exceptions where new complete effects were provided. The crystalline entity is a very glaring example. The new effect blows away anything you might remember having seen previously. Often the raw footage from the ILM model work was discovered and rescanned at the high resolution. The non-effects work was easily converted as it had been originally shot in 35mm film. The result isn’t quite as splashy as the work on the original series, but it is quite impressive. Suffice it to say that you’ve never truly seen this show until you’ve had a chance to catch these Blu-rays. I don’t care how much money you spent on the laserdiscs, DVD’s, or even VHS copies that currently occupy your video shelf. No self-respecting Star Trek fan can be caught dead without these discs.

Now they are all finally available on Blu-ray. If you know someone who has been waiting for the entire collection, this is going to make one heck of a gift package. Or you can fill in that final year with the season 7 release, just out this month. If they have all of the seasons, you can pick up The Best Of Both Worlds in a standalone disc that combines the series finale into its own feature format. If there’s a Trekker on your list, these Blu-rays have to be on the top of his. It’s a gift that truly is out of this world.

Gino Sassani is a member of the Southeastern Film Critic's Association (SEFCA). He is a film and television critic based in Tampa, Florida. He's also the Senior Editor here at Upcomingdiscs. Gino started reviewing films in the early 1990's as a segment of his local television show Focus. He's an award-winning recording artist for Omega Records. Gino is currently working on his 8th album Merchants & Mercenaries. Gino took over Upcomingdiscs Dec 1, 2008. He works out of a home theater he calls The Reel World. Favorite films: The Godfather, The Godfather Part II, The Body Snatcher (Val Lewton film with Karloff and Lugosi, not the pod people film), Unforgiven, Gladiator, The Lion King, Jaws, Son Of Frankenstein, The Good, The Bad And The Ugly, and Monsters, Inc.
Holiday Gift Guide Spotlight: CBS Television Edith Wharton: The Sense of Harmony