Edith Wharton: The Sense of Harmony 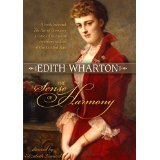 “Life is always a tightrope or a featherbed. Give me the tightrope.”

Edith Wharton was born into the “featherbeds” of New York’s high society, and some of her most famous books — “The Age of Innocence”, “The House of Mirth” — are set among the well-to-do elite. But this dry, informative documentary — which focuses on her work as a designer, world traveler, and philanthropist — makes the case that Wharton chose the “tightrope.”

Edith Wharton: The Sense of Harmony efficiently condenses those other parts of the writer’s personality into a single term: she is simply described as a “cosmopolitan.” Though she is best remembered for her novels, Wharton also wrote numerous short-story, poetry, and non-fiction collections. This 57-minute documentary surveys the writer’s entire life, making a direct connection between Wharton’s real-life hobbies/travels and her celebrated work. (In 1921, Wharton became the first woman to win the Pulitzer Prize for Fiction for writing “The Age of Innocence.”)

For example, Wharton was born in 1862 New York, but spent six years in Europe during the early part of her life. As a result, Wharton’s bibliography is filled with non-fiction works like architecture/landscaping title “Italian Villas and Their Gardens” and travel book “In Morocco.” She even used some of her diplomatic connections to get to the front lines of World War I, which inspired “Fighting France: From Dunkerque to Belfort.” Meanwhile, her eye for design and home décor led to her very first published book, 1897’s non-fiction “The Decoration of Houses” and to Wharton designing her own grand Massachusetts estate, which was dubbed “The Mount.”

Given that the documentary clocks in at less than an hour, it’s impossible to cover all of Wharton’s work. In terms of her novels, the doc pauses to note the similarities and differences between “The House of Mirth” and “The Age of Innocence.” Both deal with New York’s upper crust, but whereas “Mirth” takes a harsh and brutal look at that segment of society, “Innocence” gives them a more nostalgic re-examination.

Obviously, Wharton was a fascinating, well-rounded person. Unfortunately, this documentary’s scholarly, uninspiring presentation doesn’t quite bring its subject (or her work) to vivid life. Director Elizabeth Lennard is clearly working with very limited resources, but the little material she does have — grainy stock footage and faded pictures from the early 1900s — isn’t presented in interesting or innovative ways. We largely get a series of stills that recalls a photo gallery slideshow on your laptop, accompanied by unseen/unknown actors reading Wharton’s words from selected works and personal letters/diaries. (She regularly corresponded with literary contemporaries like Henry James.)

Occasionally, a few talking heads — biographers Louis Auchincloss, and R.W.B. Lewis, along with writer/Wharton godson Colin Clark — pop up to offer some historical context. It’s a good thing too because, instead of going chronologically, Lennard runs through Wharton’s design/traveling accomplishments, then awkwardly returns to the early part of the writer’s life to discuss her romantic travails with husband Teddy and journalist Morton Fullerton, with whom she had an affair.

Even that potentially-scandalous tidbit is described with the same gusto used to recount Wharon’s love of architecture. I believe this documentary would’ve been better served by a narrower, more engrossing focus. (For instance, it feels like Wharton on the front lines of WWI could’ve easily sustained 57 minutes on its own.) Instead, we get an all-too-brief survey that fails to attract and engage. In the end, the people most likely to find The Sense of Harmony interesting are those who are already familiar with — and fans of — Wharton’s work.