Posted in: The Reel World by Brent Lorentson on December 24th, 2014 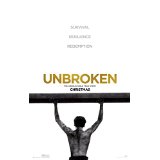 Well, it’s that time of year when the studios make that extra push for awards season, and with Angelina Jolie at the helm directing her second film, Unbroken is the kind of film where after one viewing of the trailer you just know this is Oscar bait.  I love this time of year, and I love seeing the best of what the studios have to offer, but sometimes these films with high hopes just don’t deliver as expected.  Unbroken takes us on a journey through the life of Olympian Louis Zamperini (Jack O’ Connell) from his early years as a troubled child on through his torturous years as a prisoner of Japan during World War 2. The front portion of the film jumps from Louis as a soldier and working inside a bomber to flashing back in time to what inspired Louis to become America’s fastest high school runner.  Having Louis reflecting back on his early years is understandable while his plane is taking fire, but the scenes we flash back to just don’t seem to have any real connection with the story, but seem to only serve the idea of putting action in the front half of the film to get the viewer’s attention.  As the film progresses, and the flashbacks seem to suddenly cease.  If this jumping back and forth through time isn’t too jarring, what turns out to be most off-putting is the film’s script.  Even with Joel and Ethan Coen (Fargo, No Country For Old Men) as well as Richard LaGravenese (The Horse Whisperer) and William Nicholson (Gladiator) sharing writing duties, what seems to work best for this film is when the characters are saying little to nothing at all.

Very little attention is paid to Zamperini and his journey to receive a medal in the Olympic games in Germany. Instead most of the film focuses on the physical and mental abuse Zamperini endures from the moment his plane crashes into the Pacific on through the punishing time he is prisoner in a detention camp.  Fellow soldiers come and go throughout the film, but the one constant, and in my opinion the most intriguing character in the film, is that of The Bird (Mutsushiro Watanabe), a ruthless commander of the detention center Zamperini first arrives at.  It doesn’t take long to see that all The Bird wants to do is break Zamperini’s spirit, but as we know by the title of the film, this man just can’t be broken.

It’s so inspirational; it tries so hard to be this feel-good movie it simply cannot stop with its mantra, “if you can take it, you can make it.”  There is plenty of torture and suffering throughout this film, but personally the more harrowing moments are when Zamperini are stranded at sea for 47 days following their initial plane crash.  Here the claustrophobia of being surrounded by the vastness of the Pacific delivered some of the film’s most dramatic moments.  Oh, and did I mention there are sharks?  Not since Jaws have these creatures been so terrifying, and they play so well as constant reminders of the threat the men are faced with at all times.

With nothing but the two rafts and the surrounding ocean, cinematographer Roger Deakins (Skyfall) gets to show off his talents behind the camera while filming by land, by air and by sea.  There is some beautiful work throughout this film, and I wouldn’t be surprised if Deakins received another award nomination in this film as well.

Despite the film’s beautiful style and dramatic scope, the film seems to have been too big for Jolie to take on as only her second outing as director.  Everything about this film is epic, but it just always seems to just not quite be good enough.  This isn’t a bad film by any means, and it shows that Jolie is willing to take on the big-budget epic, but there is still room for her to grow and fine-tune herself as a director.  I do enjoy seeing how much Jolie pushed herself with this film, and it has me looking forward to what she has on the horizon.

Brent Lorentson is a horror writer and film critic based out of Tampa, Florida. With a BA in Digital Film, he co-wrote and co-directed Scavenger Hunt. His short stories have appeared in various horror anthologies. In 2019 his short script Fertile Blood will be a part of the anthology horror film Slumber Party. He is currently working on his first novel A Dark and Secret Place set to be released in late 2019. Favorite Films: Taxi Driver, Fight Club, I Saw the Devil, The Wild Bunch, Dawn of the Dead, A Clockwork Orange, Pulp Fiction, Heathers, The Monster Squad, and High Fidelity.
Holiday Gift Guide Spotlight: A&E Into the Woods