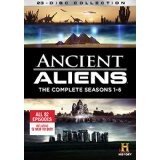 A&E always has something for everyone. They changed the landscape of television by turning the reality show on its head. Instead of losers trying to win a prize by acting like idiots, the cameras of A&E’s shows take us in to the often bizarre and hyper-real worlds of pawn shops, ice road truckers and pest control businesses. The team has put together some nice sets to help fill some gaps in the collection of someone on your shopping list. It’s time to load up on some of these collectible sets before someone ends up with coal in their stocking.

It’s that time of the year again to dust off the old hunting rifle and shake out the camouflage suits, because Duck Commander is back in action.  Duck Dynasty comes to Blu-ray for seasons 4-6. This new release brings the show back to the backwoods charm that gained my appreciation from the start.  Yes, I still have a hard time calling this a reality series, since just about every episode and sequence seems more scripted than most hour-long dramas, but the characters are so likeable and goofy that a lot can be forgiven.

But getting to the heart of the show, what makes this show work is how well this family seems to pull together for good times and bad.  Sure, people can hate on the show because people just have a problem with the Robertsons and their beliefs, but what you can’t take from them is that they genuinely care for one another.  In the last episode of the season Jase’s daughter is about to go in for surgery, and the family rallies together to have a party in support of the little girl.  This was the episode that not only seemed to be the most genuine, but it actually seemed to capture what makes reality television so fascinating at times.  To glimpse into the lives of others while we can sit in the comfort of our homes as we watch the drama or silly antics unfold where we can connect or simply see things we can’t imagine happening with our families is the appeal of reality television.

Gino Sassani is a member of the Southeastern Film Critic's Association (SEFCA). He is a film and television critic based in Tampa, Florida. He's also the Senior Editor here at Upcomingdiscs. Gino started reviewing films in the early 1990's as a segment of his local television show Focus. He's an award-winning recording artist for Omega Records. Gino is currently working on his 8th album Merchants & Mercenaries. Gino took over Upcomingdiscs Dec 1, 2008. He works out of a home theater he calls The Reel World. Favorite films: The Godfather, The Godfather Part II, The Body Snatcher (Val Lewton film with Karloff and Lugosi, not the pod people film), Unforgiven, Gladiator, The Lion King, Jaws, Son Of Frankenstein, The Good, The Bad And The Ugly, and Monsters, Inc.
The Nine Lives of Christmas Unbroken