Posted in: No Huddle by Brent Lorentson on January 1st, 2015 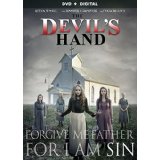 OK, so I have a confession to make, ever since I was a kid and saw Children of the Corn, I’ve been terrified of the Amish.  Does this fear make any sense whatsoever? Of course not, but I figure I can’t be too crazy, since people are afraid of numerous things like rabbits.  I still remember the day my parents hung a large picture frame filled with B&W photos of seemingly innocent Amish folk partaking in their day to day activities.  This frame I hold responsible for numerous night terrors and only reinforcing my fear.  When it came time to settle in and watch The Devil’s Hand, little did I know this would only reignite a fear I felt I had conquered.

Revolving around the lore that the commune of New Bethlehem believes, when six girls are born on the sixth month this sets in motion a prophecy that one of the girls will become a soldier for the devil upon her 18th birthday. We’ve all seen these kinds of stories before, but it’s the setting that helps set this film apart.  Instead of filling this with characters that don’t believe in these kinds of prophecies, what makes the film work is that the people of the community all seem to believe at least partially in this, so as the girls begin to go missing, everyone becomes a suspect.

There does happen to be one person that doesn’t believe in this prophecy, and that is Jacob (Rufus Sewell), whose daughter just so happens to be one of girls who may fulfill the prophecy.  He’s the outspoken member of the commune that is ruled over by their tyrannical Elder Beacon (Colm Meaney).  The film could have been stronger had we seen more conflict between Jacob and Beacon, but instead the film wants to rest its attention on the young girls and who will survive to possibly become the soldier of Satan.

It is Mary (Alycia Debnam Carey who just got cast in The Walking Dead spin-off series Cobalt) whom we follow throughout the film as her 18th birth looms only days away.  She is prone to seizures, and during these episodes she tends to have visions, though she never seems to understand what they mean, so of course this only makes the members of the commune more suspicious of her.  Considering the veteran actors Carey is working with, she still holds her own and delivers a solid performance throughout.  There is a scene where the girls are sent to be examined by the Elder Beacon.It’s a scene that is well played by both Meaney and Carey, but what makes it work is it allows the viewer to question the motives of the Elder while distracting us from the chaos of commune members randomly killing themselves and the potential sickle-wielding murderer.

Where the film unfortunately comes apart is in the film’s final act where we discover just who the killer is, and though this wasn’t hard to figure out, what troubled me most are the numerous plot threads that are simply left hanging.  Though the film does give us a clear answer behind the truth of the prophecy, we don’t see much of a follow-through when it’s evident numerous characters would be affected by this outcome but we see nothing come of this.  Had this simply wanted to be a slasher film in a unique setting the film succeeded, but thankfully it strived to be more.  Though it could have done without the numerous shots of Jennifer Carpenter scowling; seriously, someone should make a drinking game out of each shot we see her scowl.  Besides some nitpicking the film is predictable but yet fun, and at the end of the year a fun little horror flick is all I needed to send off 2014.

Brent Lorentson is a horror writer and film critic based out of Tampa, Florida. With a BA in Digital Film, he co-wrote and co-directed Scavenger Hunt. His short stories have appeared in various horror anthologies. In 2019 his short script Fertile Blood will be a part of the anthology horror film Slumber Party. He is currently working on his first novel A Dark and Secret Place set to be released in late 2019. Favorite Films: Taxi Driver, Fight Club, I Saw the Devil, The Wild Bunch, Dawn of the Dead, A Clockwork Orange, Pulp Fiction, Heathers, The Monster Squad, and High Fidelity.
12 Days Of Christmas Giveaways – Day 7: Duck Dynasty: Season 4-6 Tusk (Blu-ray)