Posted in: Disc Reviews by Archive Authors on January 1st, 2015 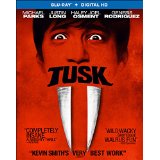 What if two radio guys sat around and made up a movie on the air? In this case it actually wasn’t radio guys, because they weren’t broadcasters, but podcasters. I guess the fine distinction between broad and pod is that pod goes out to the world through the internet. It’s kind of like Indie radio. Kevin Smith is a very indie guy and even calls his podcast a smodcast. Smith and his buddy, producer Scott Mosier, were doing their smodcast and talking about a post on GumTree.uk about roommate advertisements. It evolved into crazy talk about what might happen. The guy in one ad said he would like his roommate to wear a walrus suit from time to time.

Kevin Smith is synonymous with the advent of the modern independent film movement since his film Clerks opened 20 years ago. Smith has always been a clever writer and an interesting geek/nerd hero deeply immersed in all things lowbrow and counterculture. He runs a comic book store among other things and even had a reality series based in the store. He does seem to be going a bit crazy over the last few years, and part of that seems to be his dive into heavy marijuana use. I believe he wasn’t always a heavy user. I don’t mean to imply that marijuana makes you crazy, but in his case it led him down some strange and paranoid roads. Smith did a movie a few years ago called Red State, which was part of a rant against Hollywood. He was taking that movie on the road and releasing it by himself. With Tusk, Smith is going back to normal, but only in the broadest sense of that word.

Tusk is insane in content and execution. The whole approach is: let’s appeal to the weirdest possible person out there. But it’s also fun and stupid, in the best possible way. It’s sloppy, as is typical of a Kevin Smith movie, but excitingly offbeat and completely unpredictable. It is meant to appeal to the weirdest person out there and is completely unashamed of how ridiculous it is.

Smith has said that he wanted to give Michael Parks another proper showcase after the great job he did in Red State. Parks is a favorite of Quentin Tarantino as well. This brings up another point that is very important to this movie. There is a character Guy Lapointe who shows up at the halfway point of the movie who becomes very important to the movie as a story and a project. Tarantino was offered the part, but someone else entirely eventually took the part. The movie doesn’t tell you who that person is, and the actor is in disguise. Don’t go to Wikipedia, because they spoil it all, which I won’t do here. I’m actually surprised at how well the disguise worked, because even though I guessed it rather quickly, strangely others I know didn’t. It will probably add very strongly to the eventual box office appeal of this movie, because this is a really big star doing a full-on Peter Sellers impression as a Canadian version of Inspector Clouseau.

The movie is pretty silly and somewhat scary. Some people are rightfully concerned that the tone of the movie swings wildly between horror and comedy. It is certainly absurd and slightly surreal. Kevin Smith is a real talent, but he is erratic and anarchic, which isn’t the worst thing in the world if everyone else is too safe. He has carved out a reputation as a maverick and a free spirit, but also something of a clown. Again, none of this is necessarily bad. I think Smith is smart enough to make serious movies that would win awards but doesn’t want to. He is resolutely lowbrow in his approach, but his intelligence always shines through.

Tusk is presented in its original aspect ratio of 2.40:1. The 1080p image is arrived at with an AVC MPEG-4 codec with a very constant bit rate of 37 mbps. You can tell in an instant that the film isn’t really meant to offer you such a crystal-clear high-definition image presentation. Kevin Smith doesn’t really want you to get too much detail, particularly on the titular creature. The fairytale nature of the film is seriously compromised by the level of sharp detail offered here. It’s not that the presentation reveals flaws, so much as it affects the impact of Smith’s images. Here it begins to look like a cheap horror film or a Human Centipede rip-off, and that’s not what the movie truly is. Black levels are a bit murky, and that is the kind of image that best serves the film. Smith might have been better to anticipate the Blu-ray release and provide the film with a surreal atmosphere that could be translated to the format. It’s one of the few times that I’m saying the image is actually too good. Imagine that.

The DTS-HD Master Audio 5.1 is better matched to the material. Dialog is of utmost importance here. It doesn’t matter if it’s the typical Kevin Smith duo of radio personalities who think it’s all a big joke or the brilliant delivery from Michael Parks. The score provides a rather nice accent, and it’s here in the audio presentation that the film’s mood and atmosphere are best represented.

There is an Audio Commentary from Kevin Smith where he offers his usual profanity-laden observations on life.

Deleted Scenes: There are two scenes with no play-all option. Both have overlong introductions by Kevin Smith who does love to hear himself talk. Both were wise cuts that included distracting animation that would have greatly distracted from the film.

20 Years To Tusk: (24:27) Smith generally talks about himself here. So what else is new? He offers his filmmaking philosophy on pretty much EVERY film he’s made and gets around to offering some brief insight into this movie.

The Making Of Tusk: There are 14 very short production diaries here that likely worked as webcasts during the film’s production. They average only a couple of minutes each with only two clocking in over five minutes.

Smodcast #259 – The Walrus And The Carpenter: This is an audio feature. This is the podcast where Smith first gets the “inspiration” for the film.

Tusk is meant to appeal to the weirdest person out there, and all of us have a little weird in us. So take this journey with Justin Long, Haley Joel Osment and a big movie star to be announced later, and be secure in the knowledge that the movie is really, really weird. That’s not necessarily a bad thing.