Posted in: No Huddle by Brent Lorentson on January 22nd, 2015 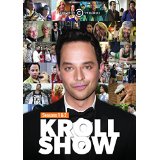 Thanks to Chappelle’s Show, Comedy Central has helped pave the way for comics on the cusp of breaking out to produce their own sketch comedy shows to springboard themselves to a larger audience.  Key & Peele has flourished in the sketch comedy scene, and now there is Nick Kroll with his own sketch comedy show Kroll Show.  But in the world of sketch comedy, is there really a need for more shows? After all, NBC still has Saturday Night Live; well, to be fair, it has been a while since SNL has been consistently funny.

Unlike the former shows mentioned, Kroll Show at no point has Nick Kroll coming out to address the audience. Instead the few setups we do get are recorded with the rest of the show.  Not that this deflects any attention from the sketches we see performed, but the added touch of seeing Key and Peele interacting with the audience is part of what makes their show work.  Kroll instead lays the sketches out for the audience at home.

As for the sketches themselves, things are a bit of a toss-up. Jenny Slate (Obvious Child) and Jon Daly assist Kroll in many of the sketches, the two sketches that stretch on throughout the season “pubLizity” and “Rich Dicks”.  These are clearly supposed to be the show’s anchor sketches, but personally there is only so much I can handle of seeing Nick Kroll in drag; the character of him being a female socialite is amusing but is present a bit much.  As for “Rich Dicks” where Kroll and Daly get into misadventures because they live their life in excess, well, I would actually like to see them make a film with these characters, but heck, that’s just me.

Just as we see in Key & Peele, Kroll Show has many of its sketches poking fun at current pop culture.  Lending their talent to sketches over the season we see Zach Galifianakis, Will Forte, Hannibal Buress, Jordan Peele, and many others.  But as it should be, the focus always returns to Nick Kroll and the numerous characters he manages to disappear into.

While Kroll Show may not be breaking the mold of sketch comedy, what is a relief is that it remembers to actually be funny and keep the viewer entertained.  I can appreciate the work and effort that goes into each episode and trying to deliver the comedic goods each time; of course there are a few duds, but overall Kroll Show delivers with the laughs.

Brent Lorentson is a horror writer and film critic based out of Tampa, Florida. With a BA in Digital Film, he co-wrote and co-directed Scavenger Hunt. His short stories have appeared in various horror anthologies. In 2019 his short script Fertile Blood will be a part of the anthology horror film Slumber Party. He is currently working on his first novel A Dark and Secret Place set to be released in late 2019. Favorite Films: Taxi Driver, Fight Club, I Saw the Devil, The Wild Bunch, Dawn of the Dead, A Clockwork Orange, Pulp Fiction, Heathers, The Monster Squad, and High Fidelity.
Contest – Win Wonder Years Season 2 On DVD From Time Life & Star Vista Zodiac: Signs of the Apocalypse