Zodiac: Signs of the Apocalypse

Posted in: No Huddle by Brent Lorentson on January 22nd, 2015 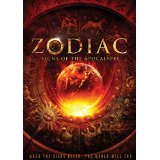 Whether you believe in horoscopes or not, just about everyone out there knows their “sign”.  I never really put too much stock in astrology; it always seemed like harmless fun people can have for a few moments each day as they read their horoscope for the day to see what possible good fortune can come their way.  In the new film, Zodiac: Signs of the Apocalypse, the film takes a different look at these astrological signs.  Rather than be signs that help reveal one’s personality, these symbols instead are supposed to be warnings for the upcoming apocalypse.

Neil Martin (Joel Gretsch) is a single father who is also a scientist who seems to be the only man that can save the world after a series of disasters occur across the globe.  For those who have seen Day After Tomorrow, Volcano, Twister, and the one…the only Sharknado I’m pretty sure you know what you are getting yourself into with this film.  It’s frustrating how the fate of the world seems to always depend on some rogue scientist that of course no one will listen to.  To leave no cliché unturned for this disaster film, helping dad reluctantly save the world is Colin (Reilly Dolman), Neil’s rebellious son.

In order to figure out and possibly prevent the end of the world, Neil and his son have to figure out how a newly discovered archeological discovery connects to the disasters.  The find relates to the astrological signs but also implies that there is another planet within our solar system, Planet X.  It’s believed that upon the discovery of Planet X and its resurgence from its journey behind the sun, that Earth will encounter numerous natural disasters that will become the planet’s undoing.  What we once believed were simple cute astrological signs are actually in fact warnings of events that will occur.  It’s a stretch, I know, but at least it’s not flying sharks.

OK, so perhaps I’m a bit hard on this film; after all, it’s a low-budget disaster film. Sure, expectations should be lowered with this kind of film, but is it too much to ask for an injection of some originality?  There were some moments where the film could have actually become a decent drama that had our characters have to confront their emotions after losing friends and “loved ones” during the disasters.  Instead no time is even spent with these kinds of emotions, so I wonder why even introduce characters like a best friend or a girl Colin has a crush on if it is going to remain so trivial to the story?

So for those keeping score at home, the film takes a strike with very little originality, as well as another strike for the lack of compelling characters.  But what the film thankfully does have are plenty of moments throughout the film of mindless destruction sequences.  Now bear in mind this is a low-budget film, but even with a smaller budget the film does succeed in giving us some entertaining destruction sequences.

While this is a far cry from sitting along the ranks of classic disaster films, Zodiac: Signs of the Apocalypse does have its moments where it is genuine popcorn fun.  Expectations can’t help but be lowered with these kinds of films, and because of that, once you turn your brain off, well, you’ll start to have a good time with this film; just don’t expect to be blown away.

Brent Lorentson is a horror writer and film critic based out of Tampa, Florida. With a BA in Digital Film, he co-wrote and co-directed Scavenger Hunt. His short stories have appeared in various horror anthologies. In 2019 his short script Fertile Blood will be a part of the anthology horror film Slumber Party. He is currently working on his first novel A Dark and Secret Place set to be released in late 2019. Favorite Films: Taxi Driver, Fight Club, I Saw the Devil, The Wild Bunch, Dawn of the Dead, A Clockwork Orange, Pulp Fiction, Heathers, The Monster Squad, and High Fidelity.
Kroll Show: Seasons One & Two Boardwalk Empire: Season 5 (Blu-ray)