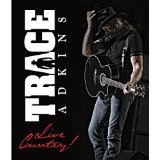 His uncle played Christian music, and he sang bass in a chorus for some years. His father gave him a guitar and started him on lessons at age five. With all of that background, it seems no surprise that Trace Adkins became a hit on the country music scene. It was obvious to everyone but him. Instead he looked to sports and a chance to be a lineman for Louisiana Tech until he blew out his knee. When the doc told him he had no chance at a football career, did he turn to that music? Nope. It was off working on an oil rig that he took to, bad knee and all. Fortunately for his fans, a chance call from a producer and a demand from his  new wife that they move away from where the first wife lived all conspired to land the future legend in Nashville where it all came together.

That was roughly 20 years ago, and now Eagle Rock has provided us with a rather intimate concert setting. The show took place at the Paramount Theater in New York. It’s a small venue, but that only adds to the intimacy of the concert. There’s not a lot of flash here. Adkins doesn’t do a lot of the energetic things many artists do on stage. The focus is almost entirely on the music, and this is the kind of place where the combination of music-first and small venue combine for a treat for the fans.

I’m not a huge fan of Trace Adkins. Haven’t really heard a lot of his music. I am fond of You’re Gonna Miss This, however. I’m a songwriter myself, and this was one of those songs I heard somewhere a couple of years back and wished I’d written it. I’m also not particularly a country fan, but good music is good music, and I enjoyed most of what I heard here. This isn’t the twangy, depressing country music I grew up hearing. Adkins incorporates a lot of rock and blues into his material. I’m sure it does wonders to expand the audience. Still, he lets us know, from his cowboy hat to his boots that he is indeed a good ol’ country boy.

This is the first Trace Adkins concert I’ve seen. The first thing you notice is that he’s surprisingly shy for a performer. He doesn’t talk much, and when he does it’s rather soft-spoken, and he kind of looks away from the audience. When he sings, it’s a different story. It’s almost like two different men. Behind the music he shows confidence, and it’s obvious he’s having a lot of fun. I suspect this good ol’ boy is more complicated than most.

The concert appears to be a bit of a time of reflection for Adkins. I get the idea he’s resurrected some early stuff he hadn’t played in a while and that goes back 20 years to his start. He plays some obligatory new songs from the “next” CD. It appears that Every Light In The House Is On is the song most fans expect to hear. In an interview on the disc he talks about the burden of that expectation, but understands why it is. He does a good job of mixing things up so that songs don’t feel like they run together. Without a huge knowledge of his songs, I feel like he found a good balance in the set selection.

The sound is as good as a DVD gets. There is both DTS 5.1 and Dolby Digital 5.1. The DTS is brighter, while there’s more sub on the Dolby. I opted to go with the DTS side of things here. Be careful. Once again Eagle Rock has placed a DVD in a Blu-ray case. I didn’t look at the small print on the back and was surprised I was watching a DVD. I know it’s labeled, and I’ve called them out on this before. There’s a good reason why the industry has adopted different size and style cases for the different formats. Some of us old folks can’t read the back without digging out the reading glasses.

(This Ain’t) No Thinkin’ Thing,

This Ain’t No Love Song

There’s A Girl In Texas

Every Light In The House Is On

It All Adds Up To Us

I Left Something Turned On At Home

Take It From Me

Adkins has an unusual presence of sincerity going, which sometimes doesn’t exactly fit with some of the songs. He can get down in the gutter better than a rap artist in C Block, but without the F-bombs. I’m not sure if he’s married now, but I would guess not. He seems to like the ladies, and his songs aren’t shy about telling you what he wants to do to/with them. It’s all in good country fun, and he’s a fresh kind of country, so you don’t have to be a country fan to like the music. That certainly describes me to a T. “I’ve never been crazy ’bout that twang and trains and hillbilly thing.”

Gino Sassani is a member of the Southeastern Film Critic's Association (SEFCA). He is a film and television critic based in Tampa, Florida. He's also the Senior Editor here at Upcomingdiscs. Gino started reviewing films in the early 1990's as a segment of his local television show Focus. He's an award-winning recording artist for Omega Records. Gino is currently working on his 8th album Merchants & Mercenaries. Gino took over Upcomingdiscs Dec 1, 2008. He works out of a home theater he calls The Reel World. Favorite films: The Godfather, The Godfather Part II, The Body Snatcher (Val Lewton film with Karloff and Lugosi, not the pod people film), Unforgiven, Gladiator, The Lion King, Jaws, Son Of Frankenstein, The Good, The Bad And The Ugly, and Monsters, Inc.
Exclusive Interview With Tom Whitus – Writer/Director Of The Junior Spy Agency The Judge (Blu-ray)