Posted in: Disc Reviews by Gino Sassani on January 28th, 2015 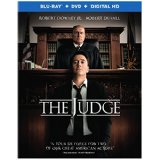 “Did that just happen?”

I have to confess that I entered The Judge expecting a different kind of film than I actually saw. After seeing the trailer, I was reminded of some of the classic courtroom dramas I’d seen over the years, from 12 Angry Men through …And Justice For All. On the ride to the screening I found my mind was swimming with the “closing arguments” Al Pacino delivered in …And Justice For All and was trying to image how Robert Downey, Jr. was going to try to top that. In the end, Downey didn’t top that wonderful monologue. In the end, The Judge simply wasn’t that kind of a movie after all.

Hank Palmer (Downey, Jr.) is a big-time city lawyer who never loses. He demands top dollar, and his clients are almost always guilty. By his own admission, innocent people just can’t afford him. All is not well, however, in Palmer’s world. His marriage is quickly falling apart, and a young daughter appears set to become the collateral damage. But Downey isn’t going to have the time to dote on an unhappy wife. He gets a call that his mother has died. While he has been estranged from his father, he dearly loved his mother and is moved enough to go home for her funeral.

Here we meet the small-town roots that Palmer hailed from. In his mind, escaped would have been a better word. It’s a dysfunctional family that would make Al and Peg Bundy’s family seem downright Rockwellian. His father is Judge Joseph Palmer (Duvall). He about the most respected guy in town, except for those who have fallen on the wrong side of his stern hand of justice. He’s referred to as Judge by even his own children. I get the impression the only one who likely refused to call him Judge might be his recently departed wife.

Palmer has two brothers. Dale (Strong) hasn’t really developed much in the mental department. The family indulges his handicap, which he escapes through the use of an old 8mm movie camera. Dale has documented decades of the Palmers’ lives with his home movies. It’s a crutch, to be sure, but it allows him to function. Then there’s brother Glen (D’Onofrio). He’s a bit of a bitter man who wants very much to resign himself to his middle-class life and family. He was once a promising baseball prospect who met with an unfortunate accident that will play into Hank’s growth.

Just when Hank remembers why he left and is eager to go back to the big city, he gets a call that the Judge is a suspect in a hit-and-run homicide. Turns out the victim was someone The Judge did hate and wish to see dead. He has no memory of that night, but as the evidence mounts, it becomes clearer that he may not only have hit the man but deliberately run him down.

Of course, Hank ends up defending his father, and the trial leads to the unraveling of both of their lives. It’s the kind of path where the past returns to haunt one, and Hank must take a better look at who he is, or who he wants to be. The ending is not as predictable as I expected, even if the ultimate conclusion one sees coming like a train in a long tunnel.

Robert Downey, Jr. brings the same cocksure attitude and smugness to Hank Palmer as he does to Tony Stark. As the film begins, you won’t really notice much of a difference between the two characters. It looks like Downey might have started to bang that one-note performance one too many times, and at first you’d be exactly right. The beauty in the performance is not in who Palmer is in the beginning or end of the film. The real good stuff happens in the creamy soft middle. Downey delivers a personal transformation here that should receive serious consideration when the Oscar nods are given in just a few months. It was a brilliant idea, whether it belonged to Downey, director David Dobkin, or both, to have our first encounter with Palmer feel so much like Tony Stark, so much like his most familiar style. Now they have us exactly where they want us. They’ve established the character without really having us work too hard at it. It’s just the necessary ingredient when they take us on a journey that is both unexpected and one of the freshest surprises of the year. It would have been so easy to give us Stark in the courtroom and everywhere else. Audiences would have eaten that stuff up. No question that Downey can carry our attention on personality alone. If you didn’t learn that from Iron Man, you should check out Tropic Thunder. This film is overloaded with incredible performances, but there’s something in Downey’s magical transformation act that gets us at the film’s end. By the end of the film you’ll be kicking yourself for ever thinking of Palmer as Tony Stark. You’ll be asking yourself how you ever thought that. Downey knows. Dobkin knows. Once you’ve seen The Judge, you’ll know too.

You know, I never get tired of Robert Duvall, and even though he’ll forever be Tom Hagan to me, he has provided a most eclectic range of characters over a very long career. It doesn’t even seem fair, because he doesn’t look like he’s breaking a sweat here. He brings a ton of emotion to the surface and makes it look so easy. So natural. There aren’t many in the history of the industry who can do that with such consistency. His chemistry with Downey is absolutely perfect. You can feel the tension between these characters the moment they first make eye contact and before a single word is spoken. All at once you know there’s decades of baggage here, and like a reality-show hoarder, you can’t wait to sift through it all as the movie unfolds.

In case that isn’t quite enough, they throw in Billy Bob Thornton as the prosecutor. Thornton goes completely against type here as the straight-laced lawyer. This might well be his most subtle performance and another pleasant surprise.

The movie isn’t really about the trial at all. Dobkin delivers this story less as a film and more like a moving painting that is more about the past and the future than what’s really happening now. It’s like watching an artist paint from beginning to end. If you’ve had that experience, you know what I’m talking about. You watch those first strokes and begin to make internal guesses about the significance of each stroke and where it’s going. When the painting is finished, it’s only then that the light switch turns on and it all makes sense. Those individual strokes have vanished, and the whole is often nothing you ever saw coming. They don’t make a ton of movies like that anymore.

That’s not to say the film doesn’t have a good share of flaws. It’s too long at two hours and twenty-some minutes. Dobkin attempts to hedge his bets a bit by filling the narrative with side trips that don’t ever really pay off. There’s a mother and daughter who bring the film close to a rather taboo subject. OK, so you want to be daring, but it’s simply unnecessary and more a distraction than anything else. If Dobkin wanted you to have something to talk about, the mistake is even larger. If that’s what people talk about leaving this film, he ended up outsmarting himself, causing his audience to miss the point. It’s a potentially damaging distraction. Cut down to maybe just under two hours, this film might have been a contender for best picture.

The Judge is presented in its original aspect ratio of 2.40:1. The 1080p image is arrived at with an AVC MPEG-4 codec at an average 30 mbps. The high-definition image presentation is a study in contrast. Exteriors often look bright, as does the city life we find Robert Downey enjoying in the picture’s start. Once in the small hometown even daylight images are dark and more than a little bit dank. Fortunately black levels are quite good, because a lot happens in shadow here. The courtroom and the family home are always dimly lit, likely reflecting the atmosphere of the film. Still, the image is sharp, allowing for wonderful detail.

The DTS-HD Master Audio 5.1 is not there to shake your room or blast you with walls of sound. This is a rather quiet film and works far more effectively in that tone. Dialog is crucial here and handled quite well. It’s crystal clear and perfectly placed in the mix. Source music has a few important moments, and the score itself is quite subtle.

Inside The Judge: (22:15) It’s a nice intimate talk among the cast and director. They are seated on comfortable sofas in a living room setting. There’s plenty of talk about method and chemistry here. They share their favorite moments together with more than a little bit of a love-fest going on.

Getting Deeper With Dax Shepherd: (9:20) This is a light feature with Shepherd interviewing his cast-mates with a lot of joking around.

Deleted Scenes: (18:28) There are 11 with optional commentary. There is no individual selection, nor is there a chapter stop for them. It’s all or nothing. One explains why Downey goes into the freezer for the frozen peas.

Some complain that the law has become too complicated to be truly effective. It’s a shame that one must pay incredible fees just to give themselves a fair shot in a courtroom. Alas, that’s true. But you want to know what’s more complicated than the legal system? And there aren’t any representatives you can pay to guide your steps. It’s fathers and sons. It doesn’t get more simple or complicated than that. Hank and Joe Palmer learn the lessons here. “And you get a front-row seat.”

Gino Sassani is a member of the Southeastern Film Critic's Association (SEFCA). He is a film and television critic based in Tampa, Florida. He's also the Senior Editor here at Upcomingdiscs. Gino started reviewing films in the early 1990's as a segment of his local television show Focus. He's an award-winning recording artist for Omega Records. Gino is currently working on his 8th album Merchants & Mercenaries. Gino took over Upcomingdiscs Dec 1, 2008. He works out of a home theater he calls The Reel World. Favorite films: The Godfather, The Godfather Part II, The Body Snatcher (Val Lewton film with Karloff and Lugosi, not the pod people film), Unforgiven, Gladiator, The Lion King, Jaws, Son Of Frankenstein, The Good, The Bad And The Ugly, and Monsters, Inc.
Trace Adkins: Live Country May in the Summer (Blu-ray)