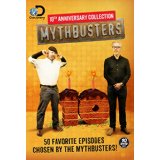 You know who the Mythbusters are, don’t you? They’ve been a staple on the Discovery Channel for over 12 years now. Yes, this 10th year anniversary release is a little late, but a welcome title all the same. If you really don’t know who the Mythbusters are by now, I can’t think of a better way to get acquainted than to pick up 50 of their best episodes in one collection. The episodes were hand-picked by the ‘Busters themselves. You want to know more? Who you gonna call? Upcomingdiscs, that’s who, because we’ve got the goods right here.

To answer the first question, the Mythbusters were originally Jamie Hyneman and Adam Savage. Jamie has done tons of f/x work on television commercials where he’s most famous for that 7-Up can-throwing machine seen during the Super Bowl. Adam comes from a line of entertainers including a father who worked as a “Muppeteer” on Sesame Street. He came out of George Lucas’s Industrial Light & Magic workshop, so you know he has a pretty good background at building amazing things. He also appeared as Mr. Whipple’s stock boy in the famous Charmin toilet paper commercials. Together they take on urban myths, fantastic claims, old wives’ tales, and iconic movie scenarios to find out if there’s any truth to these claims. The show’s hallmark is that something always invariably gets blown to pieces. Of course, we get to see it over and over again in slow motion courtesy of some sweet high-speed camera equipment. It all comes with the obligatory “don’t try this at home” warning several times throughout each episode.

The 50 episodes are spread out over 10 discs, each containing five episodes. There is no chronological consideration here. Each of the five hosts have selected their favorites, and the episodes are ordered in that way. That means you might get part 2 of a subject that was done previously but not the first episode. A good example of this is a second episode on the uses of duct tape that have the guys building a bridge over 100 feet long over a steep drop out of nothing but duct tape. It’s one of the more interesting episodes, but it does leave you wondering what they did the first time. Of course, fans of the show might already have seen that, and you don’t have to have seen an earlier episode to keep up with the antics of another.

So, what other kinds of things will you come across in this collection? Is it really that easy to move a dead body like it is in the horror movies? Find out with an interesting Halloween special. Other themed specials deal with Indy cars, Breaking Bad, duels, big rigs, viral internet videos, prison escapes, YouTube videos, Alaska, and whether the moon landing was faked. We’re talking 125 myths on 50 episodes.

Each episode has the teams talking about some myth or idea often proposed through their website. The idea is then put through the science of it all. That’s where the guys do some calculations and research. From there it’s usually a small-scale test where the results can be more easily controlled and photographed. Of course, this isn’t the stuff that has made the show such a sensation over the years. We’re all waiting for the full-scale tests that usually spell trouble for cars, planes, buildings, boats and particularly Buster. Buster is the team’s mascot, of sorts. He’s a crash-test dummy who has been really put through the ringer over the years. He’s been launched on rockets, shot at by canons, dropped from dizzying heights, scorched, blown up, and broken into the smallest of pieces. Obviously, he takes the punishment too severe for the hosts themselves.

That’s not to say the hosts don’t put themselves into some pretty hairy positions all in the name of science, or more likely ratings. The job comes with a guarantee of bruises, singed eyebrows, headaches and assaulted senses. And let’s face it. Part of the fun is watching these guys taking those risks. It’s almost as entertaining as the show’s eventual explosions. It doesn’t really matter if a myth is busted or not. You can always count on these guys to go beyond the parameters of the original concept. You could say the show’s not over until there’s maximum carnage.

What makes the show infectious is that some of this stuff doesn’t turn out the way you or even the hosts expect. The energy of the hosts keeps it all interesting, even though they’re quite good at milking a moment. You’ll find that particularly annoying on DVD where there’s always recap stuff following what would have been a commercial break when the show aired. The redundancy can sometimes be quite frustrating indeed. There’s good chemistry between Jamie who is the show’s straight man and Adam who usually does the joking around. Combined with some of the amazing toys they get to play with, it’s enough to keep you watching even through the repetition.

The stunts often require the help of NASA, bomb squad guys, and other cops and feds to keep things under control. An occasional expert in a field will show up to offer assistance. Athletes show up to attempt some of the boundary-pushing feats. It’s usually pretty safe, but there is an episode contained here where the B team launched a cannonball through someone’s house. Fortunately, no one was hurt, but you have to appreciate the honesty.

There are too many myths here to mention them all. Here are some of my favorite myths. The guys actually built a balloon out of lead to prove a lead balloon could fly. There was an episode where they proved that at high speed you could ride a motorcycle on water for over 100 feet. We’re talking water deeper than the cycle, so it was actually driving on the surface tension. It was amazing to see how hard it is to actually separate two phone books that have only had their pages interlaced. Of course, some of you out there have no idea what a phone book is, do you?

I’m a little disappointed that there are no extras here. I have to believe there’s tons of stuff that didn’t make the cut that would be a hoot to watch. Some of it is offered online at Discovery.com. We’re told that some shows have bonus material you can access online. Why not include it on a DVD release? Likely all of those moments are not still available at the website, and during the show they’re telling us that they have cool material we didn’t get to see. With the constraints of a slotted broadcast show I can completely understand. No excuse for it on a home video release.

Up until now the show has only been available in collections of episodes. Perhaps this release might lead us to eventual season releases of the show complete with extras. I’m saving room on my video shelf, “just in case”.

Gino Sassani is a member of the Southeastern Film Critic's Association (SEFCA). He is a film and television critic based in Tampa, Florida. He's also the Senior Editor here at Upcomingdiscs. Gino started reviewing films in the early 1990's as a segment of his local television show Focus. He's an award-winning recording artist for Omega Records. Gino is currently working on his 8th album Merchants & Mercenaries. Gino took over Upcomingdiscs Dec 1, 2008. He works out of a home theater he calls The Reel World. Favorite films: The Godfather, The Godfather Part II, The Body Snatcher (Val Lewton film with Karloff and Lugosi, not the pod people film), Unforgiven, Gladiator, The Lion King, Jaws, Son Of Frankenstein, The Good, The Bad And The Ugly, and Monsters, Inc.
May in the Summer (Blu-ray) Art and Craft