Posted in: No Huddle by Archive Authors on January 30th, 2015 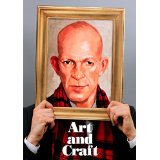 Art And Craft is a documentary about an off-kilter mind. That is not necessarily a bad thing. To have an off-kilter mind, that is. Many great geniuses and many great artists have had off-kilter minds, like Van Gogh and Kafka and others too numerous to mention. Art And Craft is about a man who painted many of the great works of art. The only problem is his paintings are nearly exact copies of the originals by famous artists. Mark Landis is one of the most prolific art forgers of the last 30 years. The other thing that should be noted is that he gives all the art away to museums as original works of the great masters. Mark is a Truman Capote sound-alike and lookalike who is on various mental health medications because he has been diagnosed with various mental conditions including schizophrenia and catatonia. His journey through life is unique, remarkable and somewhat lonely. He spent a year in a mental institution when he was 18. He was devoted to his mother for the rest of his life, but she died. His painting was a way to gain approval from his mother and pay tribute to his father, but he frequently betrays the fact that his mother knew it was all a sham. Mark reveals himself to have been a mischievous child. But Mark is a slave to his obsessions and continues his painting projects with a meticulous perfectionism, but he’s also fairly cavalier with his work, often tossing it carelessly around his cluttered apartment.

Art And Craft is also the story of Matt Lenninger, who was a relentless pursuer of Mark’s exploits. Matt is Javert to Mark’s Jean Val Jean. Aaron Cowan is a third character who is also pursuing Mark but with a different motivation.

Over the 30 years of Mark’s activities, his work is hanging in 46 museums in over 20 states, all hand delivered by Mark himself. Eventually he was exposed, and many people were gripped by conflicting emotions. It turns out many people were enamored with Mark’s story as others found it outrageous and despicable.

The story plays out as detective story in which we are privy to every move of the pursued. Mark was never pursued for many years, but eventually he started to gain notoriety and a kind of fame for being so unusual. Almost everyone was conflicted by his activities, especially when they got to know Mark. Mark is so childlike, non-threatening and disarming that you can see how everyone would find him to be a charming eccentric. Mark liked that people treated him with respect when he donated valuable art. He almost didn’t care what happened after he made a quick getaway. Of course, he made a quick getaway with nothing but the good feelings his obsessive behavior gave him. There really was no crime if he didn’t take money.

The real lesson in Art And Craft is that no situation is ever too implausible. Human behavior is always taking endless unexpected detours. Mark Landis is just one example of the unexpected twists and turns the human mind can take.

There are numerous extras on the DVD including a commentary by the three directors, Sam Cullman, Jennifer Grausman and Mark Becker. There are deleted scenes which include some details of what happened to Mark after the movie is over. There is a featurette called Faux Reel with Matt Leninger and Aaron Cowan revealing new details about their lives. In addition, an audio recording of Landis answering questions at a post-screening Q & A is included.

Art And Craft is like many documentaries I have seen, because it shows how fragile and resilient the artistic temperament is. Mark had a great talent which even he didn’t recognize. Eventually, through a tortured route, his talent found a true audience.