Posted in: The Reel World by Gino Sassani on February 1st, 2015 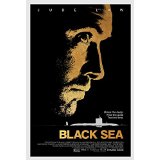 Once in a while a film comes along that defies the current trends and styles in Hollywood. Inevitably, those films usually end up being dumped on the box office in the late winter months after the holiday blockbusters have run their course and the push for notice by the Academy has reached the end of the calendar year. It is in the depths of these cold months that studios deliver the almost-rans, the square pegs, and once in a while a gem that doesn’t really fit any of the other models. Black Sea is absolutely one of those kinds of films. By next holiday season it will have been forgotten enough to contend for any of the awards, but that isn’t to say it’s not deserving. But as Clint told us many years ago in his own Academy Award winning film: “deserving’s got nothing to do with it“. Nowhere more have I witnessed that axiom proven over and over again.

Jude Law plays Captain Robinson. He is a veteran of the Navy and has worked the last 11 years for a private salvage company. He’s a dedicated submarine pilot. His dedication to both the job and the sea has cost him everything else in his life. His family has left him, and he doesn’t appear to have amassed much of a nest egg for retirement. Unfortunately, that dedication is not going to be reciprocated by the company. As the film opens, Robinson is being let go with a measly severance of 8,000 pounds. For a master of the open waters, he has never been more out to sea than he is now. There just aren’t any headings in the want ads for a submarine pilot.

While drowning his feelings in the usual pint at the usual club, he is approached with an offer that brings him back to life. During World War II Hitler had demanded a huge loan from the Soviets during their non-aggression pact. Literally tons of gold were loaded on a German U-Boat and sent to Germany. But Hitler broke the pact by invading the Soviet Union, and the gold-laden submarine was lost in the Black Sea. That’s where she remained for over 70 years. Now Robinson is offered an investor to hire him to locate and recover the gold. His cut would set him up for life. He’s provided with an old converted U-Boat design Soviet-era submarine and a crew who will all share in the reward. Because the sub’s systems are all in Russian, half of the crew are Russian while the other half are British. It’s a mix that would make oil and water appear to be a perfect mixture. Throw in the seedy personalities of the kind of men you could get for such an illegal venture, a language barrier, and the kind of mistrust and paranoia that those kind of riches create, and you have almost an exact retelling of the Bogart classic The Treasure Of The Sierra Madre.

You have to forget for the duration of the film that there are enough huge plot holes and violations of physics to sink a fleet of submarines. And credit director Kevin McDonald for keeping the intensity tight enough to distract you from such petty observations. Submarines are great locations for the kind of pure human drama that we find here. Anyone who has seen Das Boot or Run Silent Run Deep knows the kind of power these enclosed spaces can provide. The set made use of an actual vintage Soviet submarine that was on loan from a private collector. (And you think those shelves of Blu-rays and DVD’s have gotten out of hand?) It all adds up to an almost hyper-realistic experience once we leave the rather mundane surface part of the film. This is where Black Sea really starts to churn our emotions.

The tensions are only heightened by some rather brilliant cinematography. We get some rather extraordinary shots, close-ups of the faces of these men as they ponder their fates and what to do. Eyes bulge and sweat runs, and the camera cleverly points us directly onto these reactions. McDonald understands how to build on these feelings until the pressure mounts as much for us as the characters on the screen. When they finally blow and violence ends up taking over this small space, we have been swept up in its inevitable release. There’s nothing traditional in the angles and use of camera work here. The pacing has an almost retro feel. Together I have to say that while Black Sea might not be a great film and certainly owes much to both submarine and heist movies that have come before it, there can be no question that McDonald has carved out his own unique place in that lineage.

It’s not the gold or even the dangers of being in the ancient sub that drives the film. These are actually secondary plot points. It’s the characters themselves who drive the story. One would get the impression these guys might have really been going stir-crazy filming the movie. The performances are chillingly convincing. Jude Law has always delivered the goods. Here he appears to be channeling the late great Robert Shaw. Fans of both Jaws and The Deep will see elements of both films evident in Law’s performance. From the thick accent and his obsessive devolution into Captain Ahab, he reminds me of the great Shaw throughout the performance. There’s a scene where he takes out a radio Quint-like with the same matter-of-fact intensity. If you read my reviews often, you know that I love performances that go through dramatic changes that can be seen within the very essence of the character itself. If you love those kinds of performances, Jude Law delivers it in spades in Black Sea.

The supporting cast is not as well known to me, but I’ll be paying more attention in the future. Scoot McNairy plays Daniels. This is the guy who gets them into this mess, never expecting for a second he would end up serving on the sub itself. All he cares about is his own survival. I doubt the character would have ever believed the lengths he would go to in order to secure that survival. Ben Mendelsohn is Frasier, a trusted friend to Robinson who can’t seem to control his own impulses. It’s his rather illogical act that brings the crew to a boiling point, in effect creating separate factions of Russian and British crewmembers. Mendelsohn delivers some of those wonderful facial expressions that McDonald takes such great advantage of. One of my favorite characters has to be the radar man Baba, played by Sergey Veksler, who is criminally underused. Finally we have Tobin, played by Bobby Schofield. If any of the characters represent the audience in the film, it is he. He’s the young son of one of Robinson’s mates and is taken along to share in the wealth. His danger becomes an emotional weight for Robinson to carry. By the end of the film, it’s likely he’s the only other man on the sub that he truly cares what happens to.

Black Sea is far from a great film, but it is a truly effective film. The performances are wonderful, and McDonald does a brilliant job of putting the resources he has to best use. There’s a bit of CGI as we follow the exploits of the sub from the exterior, but I found these shots almost unnecessary. All that really mattered was the interaction of these characters. McDonald allows the important story points to be revealed naturally through these interactions. Sure, there are plot holes big enough to drive a Soviet-era submarine through. Do I wish there weren’t? Certainly. But for all of the improbability of events, this stands as an effective film on an emotional and visceral level. “That’s the only thing that matters right now.”

Gino Sassani is a member of the Southeastern Film Critic's Association (SEFCA). He is a film and television critic based in Tampa, Florida. He's also the Senior Editor here at Upcomingdiscs. Gino started reviewing films in the early 1990's as a segment of his local television show Focus. He's an award-winning recording artist for Omega Records. Gino is currently working on his 8th album Merchants & Mercenaries. Gino took over Upcomingdiscs Dec 1, 2008. He works out of a home theater he calls The Reel World. Favorite films: The Godfather, The Godfather Part II, The Body Snatcher (Val Lewton film with Karloff and Lugosi, not the pod people film), Unforgiven, Gladiator, The Lion King, Jaws, Son Of Frankenstein, The Good, The Bad And The Ugly, and Monsters, Inc.
Black or White Who Killed Alex Spourdalakis