Posted in: No Huddle by Archive Authors on February 2nd, 2015 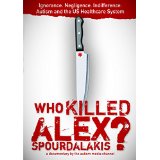 Who Killed Alex Spourdalakis sounds like a murder mystery. The cover of the DVD says, “Ignorance, negligence, indifference”. The documentary was produced by the Autism Media Channel, and the cover also says, “Autism and the US healthcare system”. The implication is that things are not going well for the growing number of parents of autistic children. In March of 2014, the Centers for Disease Control and Prevention concluded that the rate of autism had risen to 1 out of 68 births in the United States, and that was nearly double from ten years prior. That sounds like a major problem, and that doesn’t even get to the heart of exactly how tragic that really is. Death rates are high for children with autism, and that too tends to get swept under the rug. The problems of dealing with an autistic child are unimaginable to those who live a normal life.

Alex Spourdalakis had two extremely devoted caregivers who would literally do anything to relieve the problems that he dealt with. He was a normal, happy baby until 18 months. Dorothy, Alex’s mother, and Yolanda Agata Skrodzka, Alex’s godmother, doted on him every moment when he started to show problems, often never leaving his bedside when he wound up in various hospitals. The story that movie tells is a heartbreaking tragedy of an arrogant and misguided healthcare system, not able to accept the changing state of autism in America. Dorothy and Yolanda trusted the doctors as Alex went through numerous changes, assuming the doctors knew best. Over time, it became clear that the doctors mostly didn’t know what they were doing. Eventually, at age 14, Alex died.

So who did kill Alex? The answer is fairly simple legally, but the real culprits are not going to jail, and this is a problem that is repeating itself over and over in America and the world over.

Dorothy and Yolanda dealt with an early intestinal problem by close observation of Alex’s diet and solved an early crisis. Dorothy and Yolanda diagnosed food allergies on their own initiative and were right. There is family footage at every stage of Alex’s life attesting to the enormous love and care the two women provided.

Then doctors interfered again, and problems returned. One of the big problems with an autistic child is the inability to properly communicate, especially in Alex’s case. If there were problems, the only way Alex could communicate was through agitation. Doctor’s would prescribe drugs. When drugs didn’t work, they would prescribe different drugs. The movie goes into great detail about the trail of the drugs provided, all leading to worse and worse problems. The film also goes through the revolving door of different hospitals shuttling an increasingly troublesome and uncontrollable child. Alex also suffered a separation anxiety from the constant need to be taken from the home and moved from place to place. All through this Dorothy and Yolanda are filmed desperately trying to offer Alex comfort. The doctors make Alex’s condition worse and worse.

It becomes obvious looking at the film that there is no coherent method of dealing with this growing problem, and it is the families who are being punished to unimaginable degrees. Hospitals don’t want to deal with this problem, which has led to an epidemic of stress-induced homicides. In Alex’s case, after he was at his very worst he was discharged by LutheranHospital in Parkridge, Illinois after a long line of hospitals had passed him along. It was shortly after that, that Dorothy and Yolanda were arrested for the death of Alex. The film shows very clearly that the two women were saints who obviously eventually succumbed to despair. This story is also shown to be a common problem.

Various autism groups were actively involved through most of the progress of Alex’s story but were still not able to stop the tragedy.

If you plan on having a child in the future, you need to see this movie. Hope you have the strength of these two women and pray that things will finally get better in the care of children with these problems gets better. The film has extras including interviews with the filmmakers, a different story that has a better outcome, and a tribute to Alex. Overall, the film is a basic, relentless and passionate look at the problem. It doesn’t try to do anything but present the story simply and clearly. It is not an entertainment, but an education and a warning. It is not pleasant to watch and is meant to generate outrage. I recommend it not as a film but as an awakening.