Posted in: No Huddle by Brent Lorentson on February 2nd, 2015 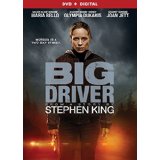 Despite Stephen King’s place in modern literary history, Hollywood continues to be hit-or-miss at successfully adapting King’s work for the big screen and television. Personally The Mist is one of my favorite films based off of King’s work, but one can never forget The Shawshank Redemption. Unfortunately, though, there are many more duds than there are successes when it comes to adapting “the Master of Horror’s” work.  Big Driver is the most current work to be brought to the screen. While it may not hold up to some of his more “classic” films, i.e.: Misery, Stand By Me, or Carrie, it is a relief to say it fares better than many of the duds that have been produced.

Maria Bello takes on the lead as Tess Thorne, a mystery book writer who seems to appeal mostly to retired housewives.  It’s a career that has brought Tess plenty of success, and in a way to reach out and meet some of her fans she goes on a book tour. Bello eases into this role nicely as the quirky mystery writer, talking to her pet cat and characters from her book that follow her around. She even goes so far as to strike up a conversation with her Tom Tom device.  It is crucial that the viewer likes Tess early on, because it doesn’t take long before things go horribly wrong for her.

Stranded in the middle of nowhere, a block of wood with nails wedged into her tire, this is definitely a situation no one wants to be in.  With no cell phone service of course the situation only becomes more dire, that is until a good-hearted soul pulls over after seeing Tess in distress.  This hulk of a man is Lester (Will Harris), who is  also the “Big Driver”.

What Lester does to Tess is terrible and does plenty to boil the viewer’s blood, but not so different from what we’ve seen in many revenge films before.  The brutality on display is rough but remains within the confines of what you would find on most basic television, but it is all enough to get us licking our lips for when Tess will inevitably set off for revenge.

The production values are high in this film which never seems to lose its effectiveness despite working on a TV-movie budget.  Oftentimes the lack of budget is a noticeable hurdle that the filmmakers are never able to overcome, yet here with the exception of some music choices, this just about holds up to a film you would catch on the big screen.  Having a long-time, experienced director like Mikael Salomon (Hard Rain) makes a difference.

As a drawback, though, with the exception of the quirks we see in the character of Tess, there isn’t much here that hasn’t been done before.  Even with a name like Stephen King attached to the story, at the core this is still a simple revenge tale.  There is never really any doubt on the direction this film will take, and sadly that’s what hurts it; it plays it safe and doesn’t risk stepping out of the box to give us anything fresh or unique.  Is the film entertaining?  Yes, but it lacks the crucial point of being impactful as well.  The film is intended to be empowering, but it never quiet convinces me that it was anything more than what it was on a surface level.  There were opportunities to play with the morality in the vengeful actions that Tess takes, but it is never explored. Even when an “innocent” victim is claimed, it doesn’t make a difference.  Consequences are glossed over while the lust for revenge is embraced, and for me this is too common of a direction taken, and at this point one could even call it a boring direction.

While Big Driver isn’t the worst of Stephen King stories we’ve seen on the screen, it still left me wanting more and resulted in an ending that simply wasn’t satisfying.  Unfortunately with all the talent involved and a promising start, the film simply stalls out when things were just getting good.

Brent Lorentson is a horror writer and film critic based out of Tampa, Florida. With a BA in Digital Film, he co-wrote and co-directed Scavenger Hunt. His short stories have appeared in various horror anthologies. In 2019 his short script Fertile Blood will be a part of the anthology horror film Slumber Party. He is currently working on his first novel A Dark and Secret Place set to be released in late 2019. Favorite Films: Taxi Driver, Fight Club, I Saw the Devil, The Wild Bunch, Dawn of the Dead, A Clockwork Orange, Pulp Fiction, Heathers, The Monster Squad, and High Fidelity.
Who Killed Alex Spourdalakis Contest: Win A Copy Of RPG (Real Playing Game) From ARC Entertainment