Posted in: No Huddle by Jeremy Butler on February 5th, 2015 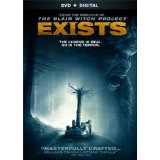 I definitely give the creators points for shying away from the usual cast of creatures that are associated with a cabin in the woods. However, the fact that scenario is a bit cliche does take away from some the points given: a cabin in the woods, seriously? It’s getting a bit old, don’t you think? Don’t get me wrong, it does provide an isolated area where controlling the chaos is easier, and I supposed there is something to be said for being cut off from the populace. I suppose when thinking about further, it does create a chill factor; however, my opinion remains the same. I would love to once, just once, see the big scary in attack a major city (and before anyone contradicts, yes, I know Godzilla is the exception to the rule).

Exist follows a group of friends as they travel into the woods for a weekend of fun and debauchery in a family cabin; unbeknownst to them, lurking in those very woods is a creature of legend, spoken about meaning people wager whether said beast is real or simply the figment of someone’s terror-filled imagination: Bigfoot. As I previously stated, I have rarely came across horror films starring this particular monster, so the idea of it being cast as the big bad held a great deal of intrigue for me. The problem, however, is given that no has ever had a clear look at the beast (not one that can be authenticated), its appearance can only be speculated. Exist finds a good way around that for the majority of the movie, by using a go-pro-like camera perspective. It provides shaky camera, making it near impossible to get a clear look at the creature. The audience is treated to good look at the Bigfoot towards the climax of the film, but in my opinion that undid the magic for me. I much would rather to have only seen brief glimpse of it as it attacked rather that seen it. Part of the mystique of the Bigfoot’s legend is the idea that no one has ever got a good look at him; however, people continue to insist that he is real. By giving him an appearance, you ruin the mystique.

The story in general does not do much to build suspense; the attacks are straightforward, requiring more thought provocation. Bigfoot attacks, and pretty much every time he does, we lose a character. It’s too traditional, too predictable. That being said, I was treated to one moment where a character did something that I didn’t see coming; the yelling in the woods, screaming for Bigfoot in hopes of a showdown, that was unique and interesting. I would have liked to see more of that. I will credit the characters with being more intellectual than predecessors, as they at least attempt fortification early on rather than waiting until being in the thick of things. I also enjoyed a genuine moment of laughter with this line right here: “I play paintball; how much hard can it be.” That was truly the best line of the movie to me.

Jeremy Butler is a film school graduate of the International Academy of Design and Technology. He is been writing for Upcomingdiscs since 2012; however, movies have played a big part of his life for much longer. Favorite genres include horror, science fiction/fantasy, and comedy. Favorite movies are V for Vendetta, Boondocks Saints, Kiss Kiss Bang Bang, and The Godfather.
The Best of Me: Tears of Joy Edition (Blu-ray) Jupiter Ascending