The Best of Me: Tears of Joy Edition (Blu-ray) 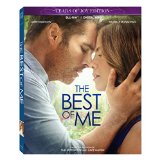 “You want me to fall back in love with you? How do I do that if I never stopped?”

Or, in my case, how do I do that if I never started? Nicholas Sparks’ fans love the author as passionately and unabashedly as the lead characters in his best-selling books fawn over each other. But even though I think The Notebook is the ideal sappy romantic drama, I’ve never been part of that club. In fact, his stories — and the movie adaptations they spawn — seem to be getting worse. And yet I was somewhat intrigued by The Best of Me…at least until the movie’s monumentally dopey conclusion, which likely inspired the release of this “Tears of Joy” mea culpa Edition.

Before we get to the end — which I won’t really spoil — we should probably start at the beginning. Dawson Cole (James Marsden) is an oil rig worker off the coast of Louisiana. We know he’s not just a meathead because there’s an early shot of him reading Stephen Hawking’s “The Grand Design.” We’re also introduced to Amanda Collier (Michelle Monaghan), a married mom who we meet staring forlornly at the same star-dotted night sky that Dawson is looking at.

Soon, we learn the connection between Dawson and Amanda. They are former high school sweethearts who reconnect in their hometown after a beloved, paternal figure named Tuck Hostetler (Gerald McRaney) dies and gifts them his picturesque cottage. The Best of Me shows us how the younger versions of Dawson (Luke Bracey) and Amanda (Liana Liberato) met and fell in love. Eventually, we also see the tragedy that ripped the two lovebirds apart and led to their lonely, unsatisfying adult lives.

At first glance, The Best of Me looks like every other Nicholas Sparks movie. Rain-soaked kiss? Check! Scenic coastal setting? Double check!! Crucial handwritten letters? Triple check!!! (Don’t believe me? People have made actual lists.) Although these tropes have become parodies of themselves by now, it’s a little silly — and *a lot* pointless — to complain about them at this junction. The Best of Me is the ninth Nicholas Sparks movie, so anyone sitting down to watch one of these films knows exactly what they’re getting.

It’s an extension of the unkillable appeal of romantic comedies and all their predictable clichés; you know the story, so the thing that matters most is how the story is told. Director Michael Hoffman (Restoration, A Midsummer Night’s Dream) certainly knows where to put the camera and how to make his actors look as pretty as the scenery behind them. More importantly, the theme of “timeless love” in The Best of Me is explored in a variety of ways. There’s obviously the idea that Dawson and Amanda never stopped loving each other, but the movie also suggests it’s never too late to pursue the person you’re meant to be with. The script — by Will Fetters and J. Mills Goodloe — clumsily helps along the re-pairing of Dawson and Amanda by making Amanda’s new husband a spectacular jerk (and a drunk!), but the idea that there’s someone out there who brings out the best in you is still very appealing.

Speaking of appealing, these sorts of movies largely hinge on the likability of their leads. Marsden graduates from Other Guy status in The Notebook to Nicholas Sparks leading man. He’s not totally convincing as a “roughneck”, but succeeds in conveying the soulful, sensitive side of Dawson. Monaghan is a good physical and temperamental match for Marsden. I wish the filmmakers had put as much thought and care into casting the younger versions of these actors. Not only does Bracey look nothing like Marsden, but his monosyllabic, damaged character is a far cry from the assured adult Marsden plays. On the other hand, Liberato brings a youthful spirit and persistence that has nothing to do with what Monaghan is playing in the present-day scenes. I get that the idea is to show how much Dawson and Amanda have changed as adults. Bracey and Liberato are fine together — just like Marsden and Monaghan — but they are simply not recognizable as teenage versions of the same characters. McRaney is a crusty, welcome presence as the supportive Tuck.

And since we’ve put it off long enough, let’s talk about the ugly ending. There’s a significant subplot in The Best of Me about Dawson’s violent, white trash family. (A pivotal late scene finds Dawson literally on the “wrong side of the tracks.”) Suffice it to say, they wind up playing a role in a finale that twists itself into contriving the most melodramatic ending possible. And just when you think you’re done rolling your eyes, a second revelation involving Amanda’s new family will make you re-roll them. I honestly don’t understand how this ridiculousness — which closely mirrors what happens in Sparks’ book — is supposed to make people sad; watching it play out on screen just made me angry.

I suspect I’m not the only one since this “Tears of Joy” Blu-ray offers an alternate ending that drastically changes the last 15 or so minutes of the movie. (You can switch between the 118-minute Theatrical Cut, and the 116 minute “Tears of Joy” edition using the Set-Up option on the menu screen.) We’ll get to the rest of the Special Features in a bit, but first…

The Best of Me is presented in an aspect ratio of 2.40:1. The 1080p image is arrived at with an AVC MPEG-4 codec at an average of 25 mbps. Impeccable, sun-kissed scenery is one of the hallmarks of any Sparks production, and this Fox Blu-ray delivers that in spades. In fact, from the opening sweeping shot of Dawson’s oil rig, the movie announces itself as somewhat of a more visually ambitious venture than we’re used to. (Which makes the horrible ending even more unbearable.) This is a totally clean image with warm tones and spot-on color and contrast. Colors become intentionally saturated during several brief dream(y) sequences, but they otherwise pop naturally. (Particularly with the flowers in Tuck’s garden.) Black levels are inky enough when Dawson and Amanda stare at the same night sky, but become a little murkier at later points in the film. That’s a minor complaint in what is a truly impressive visual presentation.

The DTS-HD Master Audio 5.1 track is dialogue-driven, for sure, but offers a surprisingly full sound. The lovely score by Aaron Zigman swells pretty consistently — and a little intrusively — but that’s par for the course in a sappy romantic drama like this one. Dialogue is confined to the front speakers, while the rears ease out the ambient noise you’d expect with such an idyllic setting. (Lots of bird noises in this one, which makes the experience feel pretty immersive.) Balance is quite good overall, and the subs make an appearance during the obligatory thunderstorm.

“Along for the Ride” (1:53) A sneak peek/glorified trailer for “The Longest Ride”, the upcoming Nicholas Sparks adaptation. (Don’t act surprised that there’s another one coming.)

Nicholas Sparks Interviews: Michelle and James: (2:47) The author’s “interview” style here mostly involves him talking about his own inspiration for the characters and then briefly asking the two stars for their thoughts, but you shouldn’t expect hard-hitting questions from this on-the-set chat anyway.

Nicholas Sparks Interviews: Liana and Luke: (2:18) Mostly notable for the fact that Bracey is Australian almost says more here than his laconic character does in the entire movie.

Commentary with director Michael Hoffman: The director talks about filming in Louisiana and points out the surprising amount of visual effects in this movie. Otherwise, it’s a pretty typical lovefest, although Hoffman does admit he didn’t worry too much about physical resemblance when casting the younger versions of the leads. (My two cents: he should’ve worried more about physical resemblance.)

Music Video: “I Did” by Lady Antebellum: (3:28) Hey, I like Lady A, but this video — of the song that plays over the movie’s end credits — is too treacly by half.

The Best of Me was on its way to being one of the better Nicholas Sparks movies in a while until its offensively stupid ending.

The good news is this Blu-ray offers a happier alternate version, along with top-notch picture and really good sound. If you’re a Nicholas Sparks fan, you’ve probably already seen and love this. If you’re a casual movie watcher, go straight for the “Tears of Joy” edition and thank me later.