Posted in: No Huddle by Brent Lorentson on February 10th, 2015 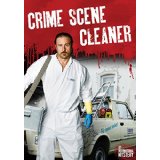 Consider that we are in a golden age of television, where it is just about impossible to keep up with all the good television shows, even with the luxury of DVR.  That being said, the notion of taking on watching a show that is broadcast overseas can seem a little daunting (yes, I know there are still legions of loyal Doctor Who and Sherlock fans, just to name a few).  When the offer came along to check out a comedy from Germany I was more than a little hesitant, but upon hearing the title Crime Scene Cleaner, well, my interest was piqued.

The show is centered on Heiko “Schotty” Schotte (Bjarne Madel), who is your typical middle-aged single guy, that is, until you discover that he is a crime scene cleaner.  In case you were wondering, his job is to come in after the police have completed their investigation of a possible homicide and clean up whatever mess is left behind.  Despite the gruesome nature of the job, the show avoids going for cheap gross-out moments and instead focuses on Schotty’s interactions with those connected to the deceased.

Crime Scene Cleaner does more than dabble in macabre humor, and in some episodes it does more than toe the line of decency.  Whether he’s discussing career choices with a prostitute or receiving relationship advice from the deceased, Schotty oftentimes can be an opinionated character who has no shame in sticking to what he believes in.  Most of the episodes depend on the verbal back-and-forth with a character who most often will combat Schotty with his opinions.  In one episode we see how Schotty reacts to having to clean up a crime scene in a room that houses Nazi regalia, and those who work in the building seem to be Nazi sympathizers as well.  It’s easy to paint a Nazi supporter as a villain, but seeing this from the perspective of a German television show, it offered up a more unique subtext to the situation, much like how we see in American television and film as we confront the ongoing issues of racism.

Though the subject matter may at first seem bleak, the show thankfully remembers to give the audience a good laugh.  One episode Schotty finds himself held captive by a husband who seemingly snapped one afternoon out of frustration with his wife and in turn the man hacks the wife up.  It’s a bloody mess for Schotty, but little time is spent on the cleanup and is instead about Schotty trying to understand what would lead the man to one day killing his wife.  But staying true to the show’s formula, humor is sprinkled throughout not only in the dialog, but the show even delves into some lowbrow bathroom humor, which translates no matter what language you speak.

Crime Scene Cleaner is released on 2 discs and contains 10 episodes in total, all in German with English subtitles for you to follow along.  As the final episode played I found myself a little bummed that there were no episodes left to watch, and now I find myself anxiously waiting to discover if new episodes are on the horizon for a release.  Each episode clocks in just under 30 minutes, and it is a show that I found it easy to devour multiple episodes in one sitting.  This is a show I wouldn’t mind seeing getting the American treatment so long as it stayed true to the source material. Already I could see Paul Giamatti stepping in as Schotty.

Brent Lorentson is a horror writer and film critic based out of Tampa, Florida. With a BA in Digital Film, he co-wrote and co-directed Scavenger Hunt. His short stories have appeared in various horror anthologies. In 2019 his short script Fertile Blood will be a part of the anthology horror film Slumber Party. He is currently working on his first novel A Dark and Secret Place set to be released in late 2019. Favorite Films: Taxi Driver, Fight Club, I Saw the Devil, The Wild Bunch, Dawn of the Dead, A Clockwork Orange, Pulp Fiction, Heathers, The Monster Squad, and High Fidelity.
Seventh Son Exclusive Interview With Thomas Dekker Of Fear Clinic