Posted in: The Reel World by Brent Lorentson on February 7th, 2015 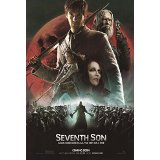 Riding on the coattails of the success of the The Lord of the Rings films and The Hobbit, studios have attempted to cash in on the revived interest in fantasy films.  There have been many flops along the way; Game of Thrones seems to be the only series that has managed to not only be a success but break out as a hit with a legion of loyal fans. Universal now has stepped up to the table to hopefully embark on what they could hope to be a new successful fantasy franchise with Seventh Son.   With Oscar-caliber actors headlining the film as well as some tremendous CGI work, is it enough to make this film a smash with audiences?  I’m afraid things are not so promising for this film.

Jeff Bridges plays Master Gregory.  Gregory is what is called a Spook, basically a knight of sorts that hunts down any and all kinds of supernatural forces that lurk about.  Gregory is one of the last of his kind, and after we see his young apprentice get himself killed, Gregory is tasked with finding a new apprentice to help combat the evils that haunt the night.  Gregory is older, and his days could be numbered considering the amount of drinking he does, so perhaps it’s because he understands his own mortality that there is little time to waste and that for the next man he is to train, there is no room for mistakes.  The method Gregory uses in choosing his apprentice leads us to the title; the chosen one should be the seventh son of the seventh son.  I’m not sure about the logic behind this; perhaps in the books we get more of a back story to this process, but logic is the last of this film’s problems.

The big bad that Gregory is tasked with taking down is Mother Malkin (Julianne Moore), a witch who not only is capable of your run-of-the-mill sorcery but can also turn into a dragon.  Gregory and Malkin faced each other once before, and for some time Gregory is able to keep Malkin under lock and key, but with the passage of time Malkin is able to make her escape, and in her time locked away she has become an even more powerful witch.

At this point the concept is fun, but what the story doesn’t convey is simply how awful the voice is that Bridges decides to go with in this film.  Imagine his drunkard voice from True Grit mixed heavily with his best (worst) Gandalf impression.  What makes this so frustrating is that half the time Bridges speaks you can’t even understand what he is saying. It’s a role where only through the power of Blu-ray and subtitles will I finally be able to know what he was saying throughout the film.

Stepping in to become Gregory’s new apprentice is Tom Ward, played by Ben Barnes. He’s no stranger to the fantasy world after being in both Stardust and the Chronicles of Narnia films.  Barnes puts in a noble effort, but unfortunately this role offers us nothing we haven’t seen before in this kind of film, in fact the film’s lack of originality is yet another one of its pitfalls. We get all the clichés from Ward having to overcome his self-doubt and those around him believing he may not be good enough, to even falling in love with a girl who may or may not be good for him.

Most of the film involves Gregory going through the motions of training Tom to be a Spook.  Between lessons the two are involved in numerous brief confrontations with an array of monsters, yet none manage to be either memorable or all that interesting.

If not for the talent on screen in this film, Seventh Son would simply be no better or worse than a straight-to-DVD release that many would neglect while searching their Netflix queue.  Unfortunately there is simply nothing here we haven’t seen before, and the effects appear to be all CGI, which only had me feeling at times as though I were watching a video game rather than an epic fantasy film.

Brent Lorentson is a horror writer and film critic based out of Tampa, Florida. With a BA in Digital Film, he co-wrote and co-directed Scavenger Hunt. His short stories have appeared in various horror anthologies. In 2019 his short script Fertile Blood will be a part of the anthology horror film Slumber Party. He is currently working on his first novel A Dark and Secret Place set to be released in late 2019. Favorite Films: Taxi Driver, Fight Club, I Saw the Devil, The Wild Bunch, Dawn of the Dead, A Clockwork Orange, Pulp Fiction, Heathers, The Monster Squad, and High Fidelity.
Jupiter Ascending Crime Scene Cleaner