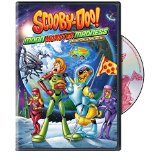 “Three years ago brash billionaire daredevil Sly Baron vowed to make space tourism a reality. Today his lucky passengers are boldly going where none of them have been before. No, not Delaware…space.”

It’s a new frontier for the Scooby gang, but not the final one to be sure. Scooby Doo has spanned generations and over 40 years. Since the 1960’s the name and conventions have become a part of the pop culture. The original cartoon series had a series of conventions. The Scooby gang would drive around in their green Mystery Machine van and solve ghostly mysteries. Fans of the show quickly grew to learn that these spirits and goblins were usually just normal people using scare tactics to get revenge or make a profit. The cartoon classic spawned music albums, live action movies, and several new shows and animated features.

The jokes haven’t changed much, even if the voices have. Frank Welker, who voiced Freddie briefly in 1970, returns as Freddie and Scooby Doo. Unfortunately Don Messick died in 1997, and Welker has been voicing the pup since that time and before. Mindy Cohn has been voicing Velma since 2004, replacing a line of actors starting with Nicole Jaffe. What’s important is that Casey Kasem, who is no longer with us, does not return as Shaggy, a part he’s played since 1969. That part now goes to Matthew Lillard. Don’t get me wrong, he does a fine job, but this was the most unmistakable voice in the mix in the old days. Older fans will notice the change with sadness. Part of me is very glad to see that Scooby and the gang are still out there working for Scooby Snax. The charm remains, even if the jokes don’t appear quite as funny anymore. You’ll likely pick this up as much for yourself as your kids. Just don’t be too disappointed if it doesn’t seem quite the same.

Sly Baron (McDowell) wants to make space travel common. He invites several A-list celebrities along for the launch of his moon rocket. The list includes a football star, a pair of vintage astronauts, and the five lucky winners of a lottery. You can guess who those winners might be. It’s the Scooby gang. Passengers also include Ridley, who is an obvious homage to the Ripley character in the Alien films. This character “knows” there are aliens and looks forward to kicking their butt. Shannon has cozied up to Daphne, and it’s making Velma a little jealous. But when they get to the moon, there’s no time for that stuff.

It seems Sly has built a luxury resort city on the moon, but someone doesn’t want him to bring any more guests. It’s no coincidence that the alien creature owes a lot to the Giger designs of the Alien franchise creature. I’m not giving anything away to Scooby fans by telling you the culprit is all too human and about to leave the Scooby gang stranded on the moon.

The animated feature is actually a nice blend of classic and more contemporary cartoon designs. There’s faithful execution of the classic characters and more than enough of the familiar in the story. All the while some of the animation takes full advantage of the best of computer-assisted work. It’s a blend that should look awkward, but really isn’t. There are times I really felt like I was watching the 70’s cartoon, while still finding moments that looked pretty awesome even by today’s standards. If you needed any proof that the intent was just that, you need look no farther than the opening and closing credits. The opening credits are cinematic in scope and style. The closing credits are a throwback to the earliest days of cinema. That makes this easy to enjoy by the youngest audiences while we “older” fans can still dig that feeling of nostalgia all the way.

Malcolm McDowell seems to be showing up everywhere in his career. He takes a spin as the eccentric Sly Baron here. Mark Hamill has a bit of a voice cameo, and Jennifer Hale jumps into two of the female leads of Shannon and Ridley. Look for plenty of sci-fi/alien invasion jokes along the way that go back to us old-timers’ days.

There’s an extra feature that finds Mindy Cohn visiting with folks from NASA’s Space Camp. It’s a little over 10 minutes and mixes in clips from the feature.

Look, this isn’t rocket science. OK, this time maybe it is rocket science. Still, Scooby Doo has endured for one reason only. It’s as fun as a full box of Scooby Snax. “And that’s the truth, so help me hotdogs.”

Gino Sassani is a member of the Southeastern Film Critic's Association (SEFCA). He is a film and television critic based in Tampa, Florida. He's also the Senior Editor here at Upcomingdiscs. Gino started reviewing films in the early 1990's as a segment of his local television show Focus. He's an award-winning recording artist for Omega Records. Gino is currently working on his 8th album Merchants & Mercenaries. Gino took over Upcomingdiscs Dec 1, 2008. He works out of a home theater he calls The Reel World. Favorite films: The Godfather, The Godfather Part II, The Body Snatcher (Val Lewton film with Karloff and Lugosi, not the pod people film), Unforgiven, Gladiator, The Lion King, Jaws, Son Of Frankenstein, The Good, The Bad And The Ugly, and Monsters, Inc.
Walker, Texas Ranger: War Zone The Chair