Posted in: No Huddle by Brent Lorentson on February 20th, 2015 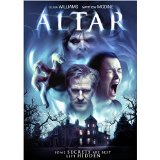 When it comes to haunted house films, despite how often the plots seem to be retold time after time, it is still hard for me to say no to giving them a shot. After all, you never know when you may stumble upon a gem.  I wouldn’t go so far as to say Altar is a gem or a groundbreaking entry in the genre, but for some late-night thrills the film has all the ingredients to deliver a case of the late-night creepy crawlies. The Hamilton family arrives at a large country house in Yorkshire, where Meg (Olivia Williams) is tasked with restoring the home to its original condition.  With her husband, Alec (Matthew Modine), an artist, the pair tries to make the best of their situation along with their two kids, Penny (Antonia Clarke) and Harper (Adam Thomas Wright).  The major takeaway I found with the film from the start is that clearly the director Nick Willing is a fan of the Stanley Kubrick version of The Shining. As a fun drinking game, any time you catch reference to the film, take a drink, and you’ll be snookered out before the film reaches the final act.

It’s a simple prick of a nail that seems to awaken the spirits trapped inside the home.  Alec pays little attention to this trivial wound at first, but as time passes we see a change come over him as he obsesses over his own blood, which he later incorporates in a sculpture that he is working on.  He becomes obsessed with his work in a very Jack Torrance sort of way, but Modine manages to keep his character relatively likeable while becoming creepier as the film progresses.

The ghosts that inhabit the home don’t limit themselves to just overtaking Alec, as we also see Penny being visited by a mysterious female spirit as well.  What sort of threw me off is that though Penny is the one being visited by the spirits and she seems the most curious about what is happening at the home, we instead follow Meg as she tries to ignore what is going on around her.  Even when Meg is confronted with various odd experiences, she does little to be proactive in understanding what is happening to her and her family.  Even though Meg is intended to be the main character of the film, I found her character to be the least engaging of the family. We know there are some issues between her and her husband, but it never seems to be explored in this film until we see there has been a dynamic shift in Alec’s personality.

What works best for this film is that on a technical level this is a great looking film with some beautiful cinematography throughout.  Whether it is the stunning exterior shots or the clever shots that are clearly a nod to The Shining, a long tracking shot following Harper as he plays with his remote control car till he comes across two characters standing in the hallway is about as on the nose as you can get with homages.  But that’s OK, because the film follows through with having a sort of nostalgic feel to it.  It doesn’t throw the story at us all at once; it takes it’s time revealing the story to us, which is fine.  While the film doesn’t hold up to the classics like The Shining or The Changeling, it is still a movie worth watching with the lights out on a cold and dreary night.

Brent Lorentson is a horror writer and film critic based out of Tampa, Florida. With a BA in Digital Film, he co-wrote and co-directed Scavenger Hunt. His short stories have appeared in various horror anthologies. In 2019 his short script Fertile Blood will be a part of the anthology horror film Slumber Party. He is currently working on his first novel A Dark and Secret Place set to be released in late 2019. Favorite Films: Taxi Driver, Fight Club, I Saw the Devil, The Wild Bunch, Dawn of the Dead, A Clockwork Orange, Pulp Fiction, Heathers, The Monster Squad, and High Fidelity.
Game of Thrones: The Complete Fourth Season (Blu-ray) Exclusive Interview With Fiona Dourif From Fear Clinic