Posted in: The Reel World by Gino Sassani on February 20th, 2015 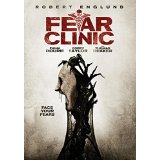 What do you do with your life when your Dad is Chucky? You star in your own films. Of course, some of those are going to be of the horror variety. That’s the story with Fiona Dourif who stars with Robert Englund and Thomas Dekker in Fear Clinic out from Anchor Bay. I got the chance to talk to her about her new film. Certainly, we had to touch on father Brad Dourif and her experiences in the Chucky franchise. Want to know what she had to say? Of course, you do. Bang it here to listen in on my chat with Fiona Dourif.

Gino Sassani is a member of the Southeastern Film Critic's Association (SEFCA). He is a film and television critic based in Tampa, Florida. He's also the Senior Editor here at Upcomingdiscs. Gino started reviewing films in the early 1990's as a segment of his local television show Focus. He's an award-winning recording artist for Omega Records. Gino is currently working on his 8th album Merchants & Mercenaries. Gino took over Upcomingdiscs Dec 1, 2008. He works out of a home theater he calls The Reel World. Favorite films: The Godfather, The Godfather Part II, The Body Snatcher (Val Lewton film with Karloff and Lugosi, not the pod people film), Unforgiven, Gladiator, The Lion King, Jaws, Son Of Frankenstein, The Good, The Bad And The Ugly, and Monsters, Inc.
Altar Dying of the Light (Blu-ray)