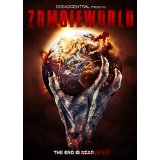 It’s as inevitable as death and taxes. When you review movies that come out on home video, you will see a lot of zombie films. Every wannabe filmmaker with a camcorder and 20 bucks thinks they can break into the business with a few staggering zombies, bare breasts and a screaming hero laying down profanities and head shots for 80 minutes. So you can understand that I release a little moan each time a studio ships me their latest zombie acquisition. Why do it? Because once in a while you find a gem in all of that trash. Every so often something surprises you, and it’s like Christmas…or maybe it’s more like Halloween. Zombieworld was one of those unexpected treasures.

I think director Jesse Baget has the same kind of reservations as I have about independent zombie films. Like me, he also knows there are some clever filmmakers out there who are doing pretty good work. Most of them deal with shorts. Outside of conventions and film festivals, there really isn’t much of a market for those projects. They really just do them for the love of it, or to at least show someone what they are capable of. Baget scoured the world for the best of these mini-films. Then he took that collection of shorts and put together an anthology film that doesn’t really play out as an anthology film.

“Don’t panic. Use your head and smash theirs.”

The Zombie Apocalypse has finally arrived. At television station KPRS, veteran anchor Marvin Gloat is played by horror-favorite Bill Oberst, Jr. Marvin has been bitten by one of the zombies invading the television studios. He’s a firm believer in “the show must go on”, and he’s determined to continue to file his reports on the disaster for as long as he can. Of course, there are a few breaks for killing a stray zombie or two. His reports include public service announcements on tips to survive the zombie hoards. There are “live” reports from other locations all over the world and even an historic piece that explains how Jesus caused the zombie outbreak when he tried to raise Lazarus without more practice.

The result is that Baget interweaves these independent short films around the Marvin Gloat broadcasts. They serve as the material the station is providing, and the result is quite enjoyable, my favorite being the Fists Of Jesus bit that starts the whole thing rolling. The shorts range from the insane to the outright silly. Still, Baget manages to work them into a whole cloth that moves along at such a clip that the movie feels over far too soon. Forget about the various production designs and levels of quality. Forget than many are not in English at all. Forget that they don’t even feel like they should be part of the same thing. Baget makes it work, and I’ll be damned if I know how he did it.

This is one of those films where all of the magic is in the editing. If these films are not woven into the fabric just so, it all comes unglued rather quickly and painfully for the audience. The film is loaded with Easter eggs for fans of the genre from Romero to Shaun Of The Dead to Resident Evil. Whatever kind of zombie film you’re into, there’s something here for you. Because the pieces move so swiftly, the movie continues to change. Even if you hate a segment or two, you’re going to get to something you’ll like soon enough. It’s the closest anyone is going to get to pleasing everyone at once.

A lot of the credit has to go to Bill Oberst, who provides the wonderful anchor to the various pieces. As we watch him become more and more a zombie himself, the framework here keeps it all pulled into a single, if loosely told, story.

The beautiful part about this idea is you can go on like this forever. It’s a great franchise idea, to be sure. I got to talk to Baget about that, and there’s no doubt he’s not finished with the format. You can check out that interview here. If you happen to locate this one, you need to do yourself a favor and pick it up. Then “find a safe place and assess the situation”.

Gino Sassani is a member of the Southeastern Film Critic's Association (SEFCA). He is a film and television critic based in Tampa, Florida. He's also the Senior Editor here at Upcomingdiscs. Gino started reviewing films in the early 1990's as a segment of his local television show Focus. He's an award-winning recording artist for Omega Records. Gino is currently working on his 8th album Merchants & Mercenaries. Gino took over Upcomingdiscs Dec 1, 2008. He works out of a home theater he calls The Reel World. Favorite films: The Godfather, The Godfather Part II, The Body Snatcher (Val Lewton film with Karloff and Lugosi, not the pod people film), Unforgiven, Gladiator, The Lion King, Jaws, Son Of Frankenstein, The Good, The Bad And The Ugly, and Monsters, Inc.
Leonard Nimoy 1931-2015 Beyond the Lights (Blu-ray)