Beyond the Lights (Blu-ray) 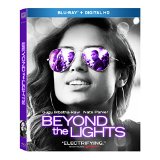 At first glance, Beyond the Lights could easily be dismissed as an updated, less starry version of the Kevin Costner/Whitney Houston romantic blockbuster. Both feature a glamorous pop star falling in love with her strait-laced protector. But while The Bodyguard became a bona fide pop culture phenomenon, Beyond the Lights had a much less dazzling run in theaters, grossing just over $14 million. It’s a shame because the flawed newer film has some interesting ideas about celebrity, artistic integrity, and…black women’s hair.

Noni (Gugu Mbatha-Raw) is a young, ascending pop star on the verge of huge breakthrough. She’s already won awards and accolades for her guest vocals on a few tracks by rapper/boyfriend Kid Culprit (real-life rapper Machine Gun Kelly). So, on the eve of her much anticipated solo album debut, why is Noni thoroughly miserable? Her despair is so deep that she threatens to jump off a hotel balcony until a police officer named Kaz (Nate Parker) comes to her rescue. (It’s a loose remake of the scene where Jack and Rose meet in Titanic.) After Noni’s team — led by mom/manager Macy Jean (Minnie Driver) — fabricate a story about Noni nearly falling off the balcony in a drunken stupor, Kaz achieves a level of fame as the Hero Cop.

Turns out Kaz has political ambitions of his own. Kaz’s inner circle — led by his police captain dad (Danny Glover) — attempt to capitalize on his instant celebrity. Noni finds herself drawn to the steady, reliable Kaz, while Kaz seems to be the only person capable of seeing through her pop star artifice. Noni and Kaz begin spending time together, which annoys their parents because the burgeoning relationship threatens both of their careers.

It’s not nearly as cheesy as it sounds on paper — an unholy mash-up of The Bodyguard and Notting Hill — because writer/director Gina Prince-Bythewood is clearly invested in the interior life of her main character. I say “character” instead of “characters” because Beyond the Lights is quite clearly Noni’s story. (Beyond illustrating how Kaz isn’t above capitalizing on fleeting fame for professional gain, his political machinations aren’t nearly as interesting or well-developed as the material involving Noni and the music industry.) The film opens with Macy Jean struggling to get a young Noni ready for a South London talent show because she has no idea how to do her hair. (Despite having a white mom, Noni has “black hair”, which is distinctive enough to merit its own documentary. A later scene sees Noni shedding part of her pop star persona and reverting back to her original tresses.) Noni loses the top prize at the talent show, and the strong implication is that she simply wasn’t white enough to win.

It’s not the last time the director addresses racism in show business, and it’s probably the least subtle way. Beyond the Lights is more effective for the things it implies, rather than the ideas that are explicitly on screen. For example, Noni’s real ambition is to be the next Nina Simone — as opposed to her actual standing as a Rihanna clone — but the idea is largely dismissed until Noni makes the world listen. The Simone sound is deemed too old-fashioned, yet two of the biggest real-life album sellers in recent years — Adele and Sam Smith — have largely succeeded producing that very type of music.

Out of the stuff that Prince-Bythewood puts on screen, the material that really works largely involves the dichotomy between Noni’s life in and out of the limelight. The director and her cinematographer Tami Reiker adopt a more documentary-like, handheld technique to contrast with any scene of Noni at an awards show or plugging her album on TV. Prince-Bythewood also proves to once again be adept at telling a sexy love story between two adults — a sneakily underrated skill at the movies these days — like she did in her feature film debut, Love & Basketball.

Mbatha-Raw is totally captivating and totally convincing as a damaged modern pop tart. (This performance helps illustrate the English actress’s range, following her title role in the period drama Belle.) Parker could’ve easily been stuck playing a tree since Kaz — short for “Kazam” (seriously) — is the more stable, less dynamic character. But the actor avoids falling into wooden territory and projects the quiet goodness that makes Kaz attractive to Noni. Driver is pretty great as Noni’s controlling “mom-ager”, a performance that could’ve devolved into caricature. Instead, the actress underplays Macy Jean as a mother who so badly wants the very best for her daughter that she doesn’t notice that Noni hates her life and hasn’t enjoyed singing in a very long time. Conversely, Glover doesn’t get nearly as much to do as Kaz’s dad.

This Fox Blu-ray also features an unrated Director’s Cut of the film. But before we get to the Special Features…

Beyond the Lights is presented in an aspect ratio of 1.78:1. The 1080p image is arrived at with an AVC MPEG-4 codec at an average of 28 mbps. As I mentioned before, the film very purposefully draws a distinct line in its visual presentation between Noni’s professional and private lives. As a result, the image is likely to underwhelm you at first, since the Lights seem to be turned down during those early, grittier scenes in South London. However, the image easily proves its mettle and versatility thanks to the “Masterpiece” music video (a spot-on carbon copy of a provocative modern hip-hop clip) and any of Noni’s on-camera appearances. Meanwhile, the scenes of Noni in lonely hotel rooms and an extended Mexican interlude with Kaz favor lovely natural lighting. The common thread is that this is a consistently clean, blemish-free image.

The DTS-HD Master Audio 5.1 track obviously thumps to life during any of the musical numbers. (The subs particularly jump to life during a love scene set to Beyonce’s “Drunk in Love”) However, there’s also a full, substantial musical sound on display during quieter sequences, like Noni’s acapella rendition(s) of Simone’s “Blackbird.” In addition to clear dialogue — confined to the front speakers — there is very distinct channel separation on display. Rear speakers largely focus on one supporting sound at a time, whether it’s echoing the music or crowd noise. The result isn’t quite as immersive or powerful as other tracks, but serves this particular film quite well.

Filmmaker Commentary with director Gina Prince-Bythewood, cinematographer Tami Reiker, and editor Terilyn Shrophsire: For all the ritz on display, the trio regard the movie as a scrappy production. (It’s a testament to their talent that Beyond the Lights looks much more expensive than its $7 million budget.) They talk about the importance of authentic touches, like filming at the real BET Awards, securing cameos from artists like Big Sean (as himself), and sending the actors who play overzealous photographers to “paparazzi school.” This is an entertaining, informative chat; only available with the Director’s Cut.

Director’s Cut: Speaking of the Director’s Cut, this alternate version of the film only clocks in at 16 seconds longer than the theatrical release. The difference here is material — during a steamy scene in an airplane, and during a disastrous awards show performance — that initially earned the movie an R-rating and had to be trimmed. Honestly, the two versions are nearly identical; go with the Director’s Cut so you have access to the commentary. You can switch between both cuts of the film using the Blu-ray’s Set Up menu.

Deleted Scenes with Optional Filmmaker Commentary: (6:05) A total of five scenes highlighted by more Minnie Driver and a scene between Macy Jean and Noni that foreshadows the latter’s Mexican getaway. Features a Play All option.

Escape to Mexico 2.0: (1:53) Alternate footage of Noni and Kaz’s Mexican interlude presented as a sort of music video montage. Lots and lots of frolicking.

Changing the Conversation: (4:58) This featurette is mostly dedicated to the movie’s director. Prince-Bythewood reveals the project was four years in the making after falling apart at its original studio. Otherwise it’s a lovefest from her cast and crew.

“Masterpiece” Music Video: (3:24) We get the full “Masterpiece” music video from the movie and all the revealing outfits that come along with it. Oddly enough, we also get an in-character peek at an apprehensive Noni before she sets out to film the video.

Gary Theard — Boom Man: (4:28) A sweet tribute to Gary Theard, the first black boom operator in the International Alliance of Theatrical Stage Employees. Theard died last year and Beyond the Lights is the last movie he worked on.

Right now, Fox’s Empire is basically the biggest thing to happen to scripted broadcast TV in the last 20 years. And while I thoroughly enjoy the over-the-top melodrama on that smash hit, I enjoyed having a more thoughtful, sharply observed counterpoint with Beyond the Lights.

Give this one a look if you’re interested in a pair of easy-on–the-eyes stars, or a (much) less crazy version of Empire.