Posted in: No Huddle by Brent Lorentson on March 8th, 2015 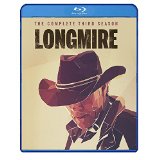 I’m going to come right out and say that before I got season 3 to review, all I had previously seen of Longmire was through advertisements I would catch every now and again.  It was a show that seemed to have a lot of promise, but with the amount of DVD watching that comes with writing for the site, you have to be a bit picky about what you want to watch in your “spare time”.  Thanks to the help of the internet I was able to watch some season 1 and 2 recaps and surprisingly when I started up season 3 there wasn’t much difficulty in catching up and getting into the groove of the show.

Sheriff Longmire (Robert Taylor) is a brooding character who by the time season 3 has rolled around not only has he lost his wife, but his best friend Henry Standing Bear (Lou Diamond Phillips) is about to go to prison for a murder he didn’t commit.  Season 3 wastes no time jumping into the drama as Longmire is thrust into action to save Deputy Branch Connally (Bailey Chase) who has been shot.  When the deputy is finally able to speak, the man he is able to identify as a shooter is a White Warrior Indian who is believed to be dead.  To help with these claims, while removing a bullet the doctors remove a crow’s feather that had been stuffed into the wounded deputy.

As season premieres go, episode 1 The White Warrior did a great job of sucking me in.  I was set to give this show a shot; I was digging the idea of seeing how law enforcement would have to work hand in hand with the Native Americans while travelling on and off the reservations to investigate their cases while also exploring the Cheyenne Indian culture.  Unfortunately as the series plays on it plays out more as a typical procedural crime show and only dabbles occasionally in the Cheyenne culture.

While the series progresses and Longmire is busy solving kidnappings and murders, Standing Bear has to struggle with life behind bars.  While waiting for his case to go to trial, he has to struggle to stay alive while he is under constant attack from rival Indians who are locked up with him. These Indians are led by Malachi Strand (Graham Greene), who has plans of his own for Standing Bear.

The show does manage to pick up steam as we get to see the recovering Deputy Connally become obsessed with finding the “dead man” who nearly killed him.  A moment where he goes so far as to kidnap a suspect and drug him with peyote is especially a fun episode that teases us with how far Connally is willing to go to catch his man.  Unfortunately, the show seems to want to pull its punches and not allow these characters to cross the line too much.  This is a show that seems to want to cross the moral lines with lawmen trying to do the right thing, but the show manages to never quite break that line.

A perfect for-instance is in episode Population 25, where Deputy Vic Moretti (Katee Sackhoff) and her husband are in an accident and while trying to look for help are taken prisoner by a backwoods freedom fighter played by Peter Stormare.  Stormare does an amazing job at being the psychotic anti-government leader, and when it comes time to torture his captives he is brutal in his own way.  Now when it comes to the confrontation between Longmire and Stormare, when our hero has every reason to unleash hell on this guy or at least give us a glimpse of some built up hostility, we get none of that, and instead a predictable and unsatisfying conclusion that has me thinking if things get bad Longmire doesn’t have the stomach to cross the line.  I’m not meaning he needs to be a dirty cop, but what these actions tell me is that if confronted with a criminal with lesser morals than an anti-government loon in the woods, what is he going to do when confronted with a stone-cold killer?

Also, once you factor in the odd sexual tension between Longmire and Vic, even if these two do hook up, it will simply seem forced and just wrong for the show.  I’d like them to keep things just platonic. After all, Longmire still hasn’t had the chance to possibly avenge his wife’s death since now he has reason to believe she was murdered.  To throw in any romance with his character would seem to just water down his drive to solve the possible murder.

While the show does have promise, I wish it would simply stick to its story arc rather than fill in the season with procedural episodes that do very little to further the plot.  There is a lot of material they can explore, but perhaps I should be grateful that the show is at least better than Walker Texas Ranger, which was what I originally feared it would resemble.  Longmire attempts to be a gritty crime story but simply is afraid to dip more than a toe into the criminal underworld involving the Native Americans or even allow its characters go to dark.  Longmire has its moments, but I’m not sure that is enough to have staying power in a time where television allows so many options to viewers hungry for quality television.

Brent Lorentson is a horror writer and film critic based out of Tampa, Florida. With a BA in Digital Film, he co-wrote and co-directed Scavenger Hunt. His short stories have appeared in various horror anthologies. In 2019 his short script Fertile Blood will be a part of the anthology horror film Slumber Party. He is currently working on his first novel A Dark and Secret Place set to be released in late 2019. Favorite Films: Taxi Driver, Fight Club, I Saw the Devil, The Wild Bunch, Dawn of the Dead, A Clockwork Orange, Pulp Fiction, Heathers, The Monster Squad, and High Fidelity.
Unfinished Business Exclusive Interview With Michael Seater From Bank$tas