Posted in: The Reel World by Archive Authors on March 7th, 2015 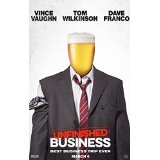 Unfinished Business starring Vince Vaughn, Tom Wilkinson, Dave Franco, Sienna Miller, James Marsden and Nick Frost is a raunchy comedy. I say that because it is the most important thing I can say that would make people want to see this movie. It is raunchy, but it is mixed with so many other issues and tones that the raunchiness and comedy sometimes get lost in the mix. The film is really more about anxiety and failure. There are so many elements mixed in that this emotional rollercoaster of a movie is so full of strange turns that it is difficult to enjoy the ride. All the performers are capable of great work and may even be doing great work here, but it gets lost. The cumulative effect is a sense of confusion, but I believe that there is a good movie here that could come out if everyone went back and did the whole thing again. The director Ken Scott is best known for having made the successful French Canadian comedy Starbuck, which was later remade as The Delivery Man starring Vince Vaughn. I assume that is how this whole project ultimately came together.

The original title for Unfinished Business was Business Trip, which would have been better since it gives focus to what’s going on. Dan Trunkman (Vaughn) quits his job to start a new company in the opening scene of the movie. The opening scene of an argument in the break room with his boss and future competitor, Chuck (Sienna Miller) gets things off to a good start. Many people have expressed confusion about what the actual business is, and I think it would have helped early on to have included a funny scene explaining the mechanics of selling aftermarket metal waste for recycling. He immediately takes on two new employees in the parking lot in a typical heart-of-gold fashion. One is an employee let go because of age. Timothy McWinters (Tom Wilkinson) is only 67 and still feels he has a lot of living yet to do. The other major character is a problem from the outside. Mike Pancake (Dave Franco) is such a confusing mix of negative and positive qualities that any normal person would have instinctively said, “Sorry, I can’t help you”. That Dan doesn’t do that immediately makes you wonder if there isn’t something terribly wrong with him as a businessman embarking on a new venture.

Sure enough, Dan faces enormous hurdles in the year ahead. The three men have worked together putting a big deal together, which should be simple to close on a big business trip after much preparation. The problem is that there are almost too many anxieties at almost every turn. Dan has a lot on his shoulders. He has a son who is overweight who has trouble fitting in and a younger sister who beats up kids that pick on her brother. He has two employees with major problems. The biggest problem to Dan, and frankly the story, is Mike Pancake. It turns out he is the product of special schools and group homes, none of which Dan ever checked, but it should have been obvious early on, since Mike can barely speak English. Strangely enough, he shows signs of high levels of competency in between his normal levels of complete bewilderment and incompetency. Timothy seems obsessed with sex because he has been in a loveless marriage his entire life. Neither Timothy’s nor Mike’s story lines are very convincing. The heart of the film should have been the bizarre culture clash of European weirdness that they encountered, like  coed steam baths, gay sex clubs, hotel rooms as art exhibits, rave clubs and G8 (a global economic summit) riots. All of these things mix together uncomfortably. They all could have been interesting movies in themselves but kind of get lost here. It’s not that these intermixing story lines couldn’t have produced magic, they just didn’t here.

We get through the movie, and all of the huge problems are dealt with in a rather haphazard fashion but we are left wondering about all sorts of loose threads (and strangely enough, unfinished business). Unfinished Business is a movie that suffers from unfinished business: the unfinished business of making this movie. They need to go back and finish it properly.