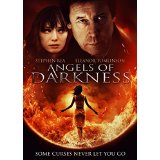 Here’s a movie that took me by surprise, and for anyone who knows me that is a high bar to clear. I was not expecting much from the picture and miraculously found myself hanging on every second. It is not your traditional horror film with a clear-cut antagonist; in fact, at some point it becomes difficult to determine who the real enemy in the film is. Which is not to say that the presumed antagonist is in any way redeemable; it just means that once you know the story there comes the possibility, no matter how slight, that you may find yourself sympathetic to their plight.

The film gets off to a good start; there is definite intrigue in the estranged relationship between Lara (Eleanor Tomlinson) and her father Dr. Hill (Stephen Rea). The film does not immediately clue us in to what has caused the rift in the relationship, but we are treated to glimpses. Based off the brief moments that allude to the strain, we gather that the mother is not in the picture, father and daughter do not spend much time together, and that the reunion is due to something the daughter was suspected of doing at her boarding school. Consider me intrigued.

I will say that a lot of the success of the project will be based on the audience interpretation of Tomlinson’s performance, as she is the central character. Rea is a presence, but he is without a doubt in the backseat to Tomlinson, who puts the film on her back and runs with it in my opinion. A truly gifted young actress in my humble opinion. She is a rare beauty, but more importantly she knows how to carry herself in the roles she chooses, and Angels of Darkness is no exception. She is quiet, reserved, and lost; all the characteristics you would anticipate in an isolated person. Her character is on an island alone until we are introduced to our other female role, Carmilla, played by Julia Pietrucha. Pietrucha and Tomlinson work well together, though the relationship delves into darkness early on. They manage to get away with it; however, I think the relationship needed to develop a little slower so the audience could digest it better.

Story-wise the film is slightly difficult to grasp, as it takes a few turns which had me questioning the type of film I was watching. I just had some difficulty placing my finger on the kind of monster that I would be seeing. There was a point where I questioned if I was even really watching a horror movie; it didn’t really seem to fit the profile. All in all, it turned out OK, overall, but it would have been beneficial to provide insight in the first hour, because the guessing grows a little old and makes you want to hit the fast-forward button.

Down to brass tacks, I would recommend it. It won’t be your traditional horror film; in fact I’m not necessarily sure if I would classify the first hour as a horror; it fits perhaps more with the drama element than horror. It’s not likely to be the best thing you see; however, Tomlinson really makes the film watchable, and if you want to see a talented actress who is sure to make a name for herself, it’s always better to study them early on.

Jeremy Butler is a film school graduate of the International Academy of Design and Technology. He is been writing for Upcomingdiscs since 2012; however, movies have played a big part of his life for much longer. Favorite genres include horror, science fiction/fantasy, and comedy. Favorite movies are V for Vendetta, Boondocks Saints, Kiss Kiss Bang Bang, and The Godfather.
Cinderella (2015) Revelation: The End of Days