Revelation: The End of Days 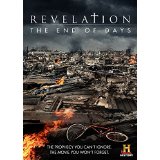 “2,000 years ago, the Bible prophesied the return of Christ…but only after God inflicts seven years of torment on the world to test the faith of mankind.”

It’s not quite seven years long, but this two-part, three-hour TV movie — History’s latest foray into original filmmaking — is likely to test the faith (and patience) of anyone who watches it. Revelation: The End of Days is intentionally less glossy than previous network offerings like Bonnie & Clyde and Houdini because it takes a ground-level look at the apocalypse. But in scaling back to achieve that aesthetic, the result is both frustrating and amateurish.

“This is starting to feel like ‘The Blair Witch Project.’”

You see, I sort of buried the lead up top: Revelation is one of those found-footage/first-person POV films where the entire story is told through video shot by the characters in the movie. (There’s also plenty of security cam and news broadcast footage mixed in.) Apparently, no one told the producers of this film that the found-footage craze is deader than the chumps in these flicks who insist on filming in the face of calamitous destruction.

Anyway, the movie is split into two parts. Part 1/“Trumpets Sound” introduces us to all the major players and the event that kick starts the apocalyptic mayhem. TV reporter Lee (Darryl Dougherty) and his cameraman Craig (Brandon Beers) are in Jerusalem filming near the Wailing Wall when an explosion destroys the sacred structure. The devastation was preceded by deep, sonic boom-like sounds that lead religious scholar Martin (Terry Wilton) to believe the attack on the wall was no mere bombing from a hostile country. (The Book of Revelation mentions angels sounding trumpets for each of God’s calamities.) Meanwhile, a massive storm descends upon most of the U.S., and a cop (Marshall Woodcock) goes on a desperate mission to find his son, who vanished suddenly during a lightning storm. We also meet a pair of pharmaceutical company whistleblowers (M.E. Lewis and Claire Armstrong) and doomsday prepper Doug (David Dantes), who might be best equipped to handle what’s coming.

Part 2/“Road to Babylon” picks up seven years after an event that drastically altered the U.S. landscape. Lee and Craig are still dragging that camera around everywhere, but the former skeptics have (mostly) become believers. As the biblical plagues keep piling up — this is where the locusts appear, and where water turns blood red — the duo tries to figure out which form the antichrist will take. Will it be doomsday prepper Doug, who has risen to prominence as the leader of an extremist evangelical cult? Or will it be the slimy Charles Brandon (David Bacque), the former head of a FEMA-esque agency who rose to become U.S. president? (Hint: the movie makes it patently obvious which one of these two is evil.) And since much of the dramatic thrust of Part 2 centers around who the antichrist is, it might have been nice if the movie tried to keep the audience guessing a little more than it does.

Unfortunately, that’s just one of the many things that Revelation gets wrong. If nothing else, the movie is very clear about what it is: Revelation opens with a disclaimer stating it is merely a “dramatic interpretation of prophecies.” So no one can accuse the filmmakers of having some sort of religious agenda; the closest this movie comes to committing blasphemy is the cinematic blasphemy of periodically resembling a SyFy original movie.

It’s a shame because there are glimmers of potential in this project. (If you look past the uniformly bad acting and tossed out the tired found-footage framework.) For example, I liked the idea of having Lee and Craig trying to figure out how prophecies from 2,000 years ago manifest themselves in the present day. (“War” comes after Israel goes to war with several surrounding countries following the attack on the Wailing Wall; “Disease” is the result of a bunch of people crammed together in a sweltering shelter following the storms.)

Even though it’s messy, choppy, and has way too many storylines — those pharmaceutical whistleblowers aren’t exactly missed in the movie’s latter half — I preferred the more propulsive Part 1 to the aggressively dreary and repetitive Part 2, which seemed to be one tedious propaganda video after another. But even Part 1 mostly plays like a disaster movie minus the big-screen spectacle that a $150 million budget buys you; I’m gonna go out on a limb and say Revelation cost way less than that.

Mostly, I just wish the movie trusted its audience much more than it does. Besides the expository newscast footage, the movie is constantly interrupted by a black screen showing us quotes from the Bible to support what we’re seeing on screen. It makes the filmmakers seem insecure…like they had a pathological need to convince us they were sticking to the scripture.