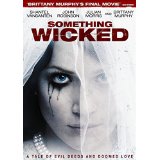 Here it is, Brittany Murphy’s swan song performance before her untimely death.  Though I may not have been her biggest fan, I could still appreciate growing up and watching her from films like Clueless and Girl, Interrupted, but for many she will always be the girl who said “I’ll never tell” in Don’t Say A Word.  The DVD promo art on the cover is banking on those loyal fans, and it does seem like an insensitive cash grab by the studio, especially since Murphy isn’t even the star. Instead she does nothing more than fill in a co-starring role in an unfortunate, forgettable performance.  So if you were looking for something more, I want to warn you from the start this is not her movie.

The film instead is focused on Christine (Shantel VanSanten), a young woman who narrowly survives a car accident that takes the lives of both her mom and dad.  Her boyfriend, James (John Robinson) was the driver in the unfortunate accident, and together the two try to make a life together while trying to cope with the tragedy that quite literally haunts them.  Taking Christine in while she works on finishing her degree is her older brother Bill (James Patrick Stuart), a local cop, as well as his wife Susan (Brittany Murphy) who happens to be a psychologist.

As Christine seems to be recovering from the tragedy, at the same time there is a stalker in her midst. What they want is unclear other than it seems they enjoy terrifying the girl.  Even the casual fan will know just when the jump scare will occur here, because Christine follows the same guidebook as every other victim in a horror film.  James does what he can to be the loyal and dutiful boyfriend, but no matter how hard he tries, something manages to go wrong for him or Christine.  What bothers me most about the relationship, despite how sweet they try to make the boyfriend I just couldn’t believe this relationship was real, and I blame most of this on the performance by Robinson, who shows a very limited amount of range, yet the story asks so much of him.

Getting back to the story, it is all over the place. It goes from a supernatural suspense tale to stalker film to creepy incestuous thriller.  Keeping the audience guessing is normally a good thing, but here the story shifts gears, and it is for no better reason than to appear clever, but really it is just lying to the audience.  Even more frustrating is that incestuous side story going on, even though we see the brother peeping on his kid sister and he is caught even watching her through the crack in the door, NO ONE addresses this.  Not once does anyone question why he’s watching his sister change, or his surprise arrival as she is engaged in a “sexual” act.  Perhaps that is simply my fault for expecting the film to answer for itself.

By the time the film eases into its third act, it has managed to reach such an absurd level of logic that you almost want to watch the ending to see how silly this will all get.  While watching the film it may not seem so over-the-top and outlandish, but the moment you start to think about what is going on, it will potentially cause whiplash from the amount of bouncing around it does.

While it is a far cry from being one of the worst films I’ve seen, it sure comes close to having the most smack-my-head-in-frustration moments.  There seem to be two or three different good short films that have been thrown together to create this cornucopia of thrills.  But just because you throw all your favorite ingredients in the pot to make a movie, it doesn’t mean you’ll like the end result. Something Wicked came and will be forgotten, and for those who are fans of Brittany Murphy, that is a good thing.

Brent Lorentson is a horror writer and film critic based out of Tampa, Florida. With a BA in Digital Film, he co-wrote and co-directed Scavenger Hunt. His short stories have appeared in various horror anthologies. In 2019 his short script Fertile Blood will be a part of the anthology horror film Slumber Party. He is currently working on his first novel A Dark and Secret Place set to be released in late 2019. Favorite Films: Taxi Driver, Fight Club, I Saw the Devil, The Wild Bunch, Dawn of the Dead, A Clockwork Orange, Pulp Fiction, Heathers, The Monster Squad, and High Fidelity.
Wolfcop (Blu-ray) 3 Holes And A Smoking Gun